The oil sector is close to breaking a record.

In February, I showed you that oil inventories were soaring. They had just reached their highest level ever.

You see, despite oil prices being down almost 60% since their June peak, oil production is still outpacing demand.

[ad#Google Adsense 336×280-IA]That means the amount of oil in storage continues to soar.

They fell for eight straight weeks from the end of April to the end of June.

But with summer vacations now over, they’re rising again.

Inventories have increased for the past seven weeks.

And they’re within 1% of their April high. Until we see a significant decrease in production, inventories will continue to move higher. If the trend continues at its current pace, we’ll overtake the April high this month. Take a look… 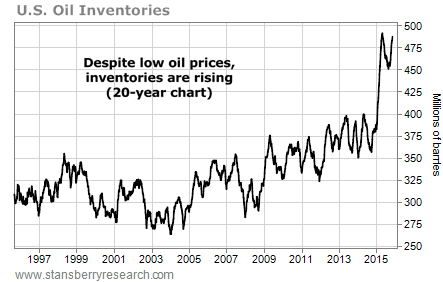 More oil in storage might be bad news for oil prices… but it’s good for the companies that generate a large portion of their profits from storing oil.

I told you about four of these companies in my February essay. Since the fourth quarter of last year, all of their quarterly earnings before interest, taxes, depreciation, and amortization (EBITDA) are higher.

These companies are also master limited partnerships (MLPs) – which means they’re obligated to return nearly all of their income to investors in exchange for certain tax benefits. So they all have high yields.

All of these companies will continue to benefit from the increasing demand for oil storage. But one of these names stands out today…

Holly Energy (HEP) generates its sales from its pipelines and storage assets. The company’s primary revenue growth in the third quarter came from its crude-oil pipelines. Shipments were up 49% over the prior year’s quarter. Holly Energy also stored 9% more barrels of crude- and refined-oil products at its terminals.

Thanks to this growth, shares of Holly Energy are up around 8% (with dividends) since my February essay. This might not sound like much, but the average MLP in the benchmark Alerian MLP Index is down 20% during this time.

Despite its growth and high yield, Holly Energy’s valuation is about the same as it was in February. Its enterprise-value-to-EBITDA ratio today is 13.1 versus 12.5 in February. The lower this ratio, the cheaper a company is.

In short, the trend is up in oil inventories. And Holly Energy will continue to be a big beneficiary. I recommend looking into units today.