Meant as a tongue in cheek poke at the complexity of financial markets, it’s unfortunately all too true.

Worse, like ostriches, they tend to stick their heads in the sand when it comes to change.

That’s bad if you depend on ’em, but GREAT if you know how to pounce on the openings they inadvertently create.

We’ve talked about this several times over the past year with great success.

And, each time, you’ve had the opportunity to rack up double digit returns on their “mistakes.”

This time around, though, I think the potential may be even bigger.

Analysts are a funny bunch. Most are myopically focused and very close to the companies they cover. Too close.

Worse, they’re often bullish when they should be bearish and bearish then they should be bullish. Like lemmings, they’d rather go off the cliff together. The fact that they take millions of unsuspecting investors with them is an afterthought. Enron is perhaps the most egregious example of what I am talking about.

More than 50% of the analysts following the company rated it a buy or a strong buy even though it had fallen from a 52-week high of $84.87 to only $0.61 by November 2001. Worse, two analysts still rated the company a “buy” and two still had it as a “strong buy” after the company was scheduled for removal from the S&P 500 Index.

Late in 2007, General Electric (GE) was struggling and had fallen from a high of nearly $60 in July 2000 to just under $40 by mid-summer. Yet, several analysts still rated the company a buy even as the Financial Crisis began to rattle global markets. One European bank, in particular, rated the company a buy and continued to do so all the way to $10 a share when it finally changed its rating to a “short-term sell,” according to MarketWatch.

It’d be very easy to call these folks stupid or use far worse language. But that wouldn’t be true.

In fact, most analysts I’ve met are exceptionally intelligent. Many have graduated from top tier universities even as others have come up through the school of hard knocks.

Wall Street is an insider’s game. “They” have a long history of saying one thing and doing another.

Do you really think an analyst is going to tell the truth about an overvalued stock like Enron or GE if his firm is engaged in a $500 million financing for that same company? No way.

It’s just as bad when it comes to undervalued companies.

For example, Sketchers USA (SKX) blew the doors off earnings this past April, yet analysts remained bearish. After a 113% run higher, that same rating changed to “neutral” then ultimately a “buy” but only after yet another 24% move higher. Had you listened to the analysts posting those ratings, you would have missed a 182.8% move from $29 a share to $82 a share. Ouch!

Lately the game’s become more refined. It’s all about expectations now that QE’s done and a Fed rate hike looms.

Companies that beat are enjoying an average increase of 1.5% over the following two days this earnings season, according to FactSet. Companies that miss are punished to the tune of a 2.5% drop. Nobody seems to mind that the bar is set so low at the moment that a limbo dancer would find it problematic.

But that’s your opening.

Every misfire is an opportunity to react to hidden cues, blind spots or simple bias.

Analysts Are Handing You a 13.3% Discount in a Great Growth Stock

The stock got grilled this past Wednesday – sorry, couldn’t resist the pun – after reporting disappointing earnings which, according to USA Today, “didn’t meet analyst expectations.”

Chipotle has returned 683% over the past six years. That’s a continuous annual growth rate of 40.92% and nearly four times the 10.7% the S&P 500 has turned in over the same time frame. 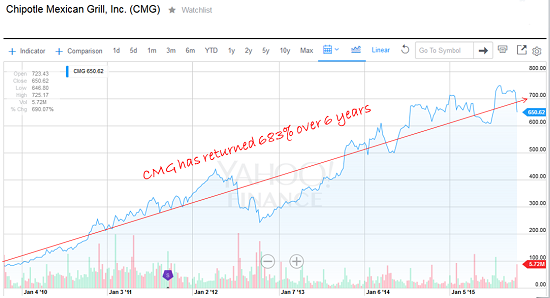 Keep in mind that the company has “surprised” analysts plenty of times along the way.

Last February, for example, traders punished the stock even more irrationally than they would in April, when it was reported that sales jumped “only” 26%. A 5% selloff occurred.

Back in October 2009, an even more drastic selloff of 10% transpired after Chipotle reported revenue growth of just 13.8% in its Q3/2009 earnings report. Released at night on October 22, the earnings report caused a huge selloff by traders disillusioned by analysts’ loftier expectations.

Or how about traders’ reactions to the Q1/2011 report released on April 20, 2011? The company reported earnings that were up more than 24% year-over-year, but its earnings of $1.47/share were shy of analysts’ expectations that were as high as $1.62/share. So despite a triumphant earnings report, the stock fell more than 10% over the next few days.

Last Wednesday Chipotle reported revenue growth of 12.2% year-over-year for Q3/2015, roughly in line with analysts’ expectations. But its earnings per share (EPS) were up “only” 10.5%, in contrast with the 11.57% improvement analysts had forecast.

Not in my book.

Chipotle registered solid double-digit growth in nearly every category that should matter to investors, a feat that’s all the more impressive at a time when overall the average S&P 500 company’s earnings are expected to drop by 3.9%.

Again, we’re talking about a stock that’s grown by 683% over the past six years. That kind of growth simply doesn’t grind to a halt overnight.

There are obviously no guarantees, but let me ask you a question if you’ve still got doubts.

Would you have backed away from Starbucks (SBUX) because growth slowed?

Keep your positions properly sized or use dollar-cost-averaging to get in to limit risk even as you are tapping into future growth. The markets are choppy so, tactically speaking, you may as well use that to your advantage in true Total Wealth style.