There’s a bull market starting in one corner of the natural resource space.

And it could make early investors a lot of money…

Lithium likely isn’t on your radar.

[ad#Google Adsense 336×280-IA]It’s used to make batteries in electronics like tablets and smartphones, and even in electric cars.

In short, if you want to make a tiny, long-life battery, you pretty much have to have lithium.

Without lithium-ion batteries, the electric cars today – like the Chevrolet Volt, or the fancy Tesla sedans – can’t exist.

According to research by Roskill Information, a commodity data provider based in the U.K., world consumption of lithium grew 11% per year from 2010 to 2014, and that rate should continue through at least 2017… thanks to rechargeable batteries. And the demand for these batteries is increasing rapidly…

The U.S. Energy Information Administration (EIA) says that in 2012, electric vehicles made up just 0.02% of the world’s total passenger cars. There were roughly 180,000 on the road. By 2020, there will be 20 million electric cars on the road. China will lead the world in new electric cars, followed by the U.S., Japan, and Spain.

Tesla plans to build a “gigafactory” outside of Reno, Nevada to keep up with the demand for electric cars. It’s scheduled to churn out 500,000 electric cars per year by 2020. That’s going to require a lot of new lithium for batteries.

Because of the surge in lithium batteries, lithium demand is expected to increase 30% per year through 2020, according to data provider SignumBOX. Demand is increasing so much that it’s outpacing supply.

World production of lithium rose from 37,400 tons in 2013 to 38,640 tons in 2014. That’s about a 5% increase… not nearly as fast as demand. And the three largest producers have not expanded mine capacity fast enough to support projected demand.

You see, lithium is found mostly in basin “brines.” The metal comes from salts that leach out of rocks and are deposited in the basins. As the water dries, the lithium salt is left as a deposit. Roughly 70% of mined lithium comes from these basin brines. The other 30% comes from more traditional hard rock mines.

Brine mining is more difficult, but there are few high-quality hard rock deposits in the world.

The market is so tight that Tesla is buying lithium from mines that aren’t even built yet. In August 2015, the car maker signed a deal with Bacanora Minerals for lithium from an unbuilt mine in Mexico. In September 2015, Tesla signed another deal with Pure Energy Minerals for future lithium from its Nevada brine project.

As you would expect, rising demand is driving prices higher. For example, the price of one ton of lithium carbonate (the most common form of lithium used in batteries) delivered to China is up 30% since June 2011. 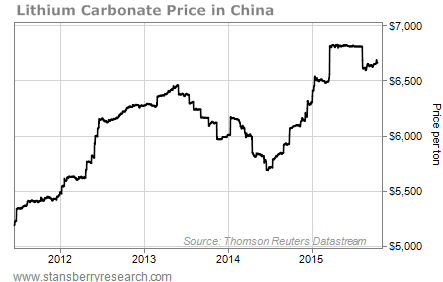 According to the analysts at Citibank, lithium carbonate prices will rise even more over the next two years, peaking around $7,000 per ton in 2017.

The biggest beneficiaries of higher lithium prices will be lithium miners. The Global X Lithium Fund (LIT) – a collection of stocks in the sector – is up more than 15% from its August 2015 bottom. This fund should head higher as lithium demand increases.

It’s hard to find a pure lithium investment today. You could buy one of the miners Tesla has signed an agreement with, but they don’t have any production yet. That’s too much risk for most investors.

The best way to gain exposure to lithium is by owning one of the bigger specialty metals companies like FMC Corp. (FMC) or the Chemical and Mining Co. of Chile (SQM).

While lithium isn’t a huge part of their revenues, the rising price will benefit these companies. For example, FMC just announced it will raise the prices of most of its lithium products by 15% starting October 1.

If you want to profit from the uptrend in lithium prices, start with FMC and SQM.