Who doesn’t love a good deal?

I think we all do.

But why is that? And what exactly is a “deal”?

And that leads to the what.

A deal would imply that merchandise of some type is priced less than it’s actually worth.

That’s the rub. Price is one thing. Worth is another.

And the two don’t necessarily correlate well all the time, or even some of the time.

In fact, oftentimes, I find that merchandise all over the place in every type of industry is often priced at either a discount or a premium to value.

This is also true with stocks, which can be used to your advantage if you’re able to correctly identify stocks that are priced less than they’re actually worth.

See, there are thousands of publicly traded stocks. And each stock represents ownership in a real business. As you can probably imagine, it’s practically impossible for every single stock to trade exactly in line with the fair value of a business.

You see that play out in real life. One day a stock is up $1. The next day it’s down $2. Might not seem like much, but when the businesses these stocks represent are worth billions of dollars, slight changes in price can affect the value of a business by billions of dollars on any single day.

Outside of any outstanding issue, how could a business be worth $2 billion more or less on Tuesday than it was on Monday?

Fortunately, we can make sense of it all.

That’s because we’re able to estimate the fair value of a business with some reasonable degree of accuracy.

But you first need to use a system of some sort that’s designed to facilitate that. One system that’s specifically tailored around dividend growth stocks is that which Dave Van Knapp proposed and discussed here at the site.

Even better, you can use any number of systems and then make a conclusion from there. If you have a small range of final valuations and you’re able to average those figures out, you’re probably pretty close to what a business is worth.

In addition, once you have an idea of value in mind, you can seek out a price that’s as far below that value as possible so as to build in a margin of safety just in case any of your assumptions are off or the company doesn’t perform as expected.

Now, I’m an investor just like you readers. I don’t just write about this stuff; I invest my hard-earned money regularly into high-quality dividend growth stocks.

Dividend growth stocks are stocks that regularly pay and routinely increase dividends, providing me with an excellent source of passive, and growing, income that I can one day use to pay my expenses with, rendering me financially independent.

If you’re looking for high-quality dividend growth stocks for your own portfolio, an excellent resource for potential ideas is David Fish’s Dividend Champions, Contenders, and Challengers list. It contains invaluable information on the almost 800 US-listed stocks that have all increased their dividends for at least the last five consecutive years, some with more than 25 consecutive years of dividend increases.

But I don’t just invest in these stocks. I attempt to buy high-quality dividend growth stocks at a discount to what they’re worth. Said another way, I want to pay a price that’s below fair value. And the bigger the spread between the two, the better.

By getting a “deal”, I’m able to accomplish a number of objectives.

I’m able to reduce my risk. I don’t really look at volatility as risk. But I do look at permanent loss/destruction of capital as risk. And paying too much for a stock means I’m taking on the risk that the stock will at some point be repriced back closer to where it should be, evaporating my capital in the process. By doing the opposite – underpaying – I reduce the risk of that happening.

Simultaneously, I’m able to increase my yield. Price and yield are inversely correlated, all else equal. Assuming no change to the dividend policy, a yield goes up when the price goes down. So paying less means more income for every dollar invested.

Finally, the potential long-term total return increases when you buy an undervalued stock. If a dividend growth stock is truly worth $30 and you pay only $20, you’re first off snagging the higher yield as just mentioned. So that increases your potential total return right off the bat via the additional income. On top of that, the odds are strong that over time the stock will be repriced closer to its fair value, wiping out the divergence between price and value, providing you capital gains in the process.

As such, you can imagine why I’m always interested in buying high-quality dividend growth stocks when they’re clearly priced lower than their fair value.

Well, it appears that I may just have found one such stock!

I find this industry in general to be pretty attractive.

It’s no secret that the demographics in the US are changing. Our population continues to grow older even as it grows larger, and an older (and larger) population will have increasing need for certain care and facilities as older age sets in.

The US Census Bureau believes that more than 20% of US residents will be over the age of 65 by 2030, compared to just 13% as recently as 2010. That’s a major potential tailwind for HCP.

Notably, proper healthcare in most scenarios is a need, not a want. It’s not discretionary spending. And, in most cases, care must be provided at a centralized facility, which all tilts in HCP’s favor.

One other factor in HCP’s favor is that the majority of its portfolio is built around triple-net leases, which means the tenants take care of real estate taxes, net building insurance, and common area maintenance. With rent escalators built in to generally long-term leases, this provides for very stable revenue that should grow over time, even before additional properties are factored in.

I think we can see why HCP has managed to increase its dividend for the past 30 consecutive years.

That kind of lengthy track record doesn’t just build itself; HCP is running a business that provides the means for such increases to occur in the first place, and HCP obviously places a ton of value on rewarding shareholders via large and growing dividends. They have a clear penchant for this.

So this stock is for investors who want that big dividend while also ensuring that their income is likely to grow at least in line with inflation (protecting their purchasing power), if not more so.

With REITs like HCP, one would look at funds from operations (FFO) or adjusted funds from operations (AFFO) to discern profit and their ability to pay dividends. Earnings per share isn’t a viable metric for REITs due to routine and massive depreciation and amortization costs that don’t necessarily affect their true profit. FFO adds depreciation and amortization back in.

Looking at the last four quarters of FFO, the payout ratio stands at over 100%. But this is due to some temporary impairments relating to restructuring terms with its largest tenant, HCR ManorCare. But this hit to FFO should be temporary. Looking at adjusted FFO over the same period, the payout ratio stands at a comfortable 71.8%. All in all, looking at long-term and recent results, the dividend appears to be well covered.

Underlying revenue and FFO/share growth has been really solid over the last decade. We’ll take a look at that now, which will later help us reasonably estimate the value of the business and its stock.

Revenue is up from $477 million to $2.266 billion from fiscal years 2005 to 2014. That’s a compound annual growth rate of 18.9%; however, REITs like HCP routinely issue equity in the form of additional outstanding shares to fund growth. Factoring that in, revenue has actually grown at a compound annual rate of 4.14%, which is respectable.

These are very solid results, overall. You’re getting growth in the mid-single digits along with that big yield, which should provide for appealing long-term total return.

S&P Capital IQ believes HCP will continue compounding its FFO per share at a 5% annual rate over the next three years, which is right in line with their average over the last decade. That’s also more or less in line with recent guidance from HCP.

However, one small thorn is the aforementioned restructuring of its master lease with HCR ManorCare. HCP reduced the annual rent by $68 million, which will have a negative effect on revenue and cash flow. However, HCP increased the average initial lease term from 11 years to 16 years, received additional assets worth $275 million, and reduced its tenant concentration by lowering portfolio income from HCR ManorCare from 29% to 25%.

The balance sheet is also conservatively run. Total liabilities of $10.4 billion line up against $11 billion in total equity. And the firm maintains solid credit ratings of BBB+ from S&P and Baa1 from Moody’s.

There’s a lot to like here. Major demographic tailwinds are in HCP’s favor.

And their business model is really solid, built on the strength of lengthy triple-net leases. Revenue and FFO/share growth over the near term appears to be continuing in a very stable direction, with only 5% of leases on average expiring annually through 2024.

Of course, risks should be carefully considered. Rising interest rates will make HCP’s new and restructured debt more expensive, and a business model that’s built on heavy use of debt (like this one) can be adversely affected. In addition, rising rates could potentially make HCP less attractive as an investment.

In addition, any more restructuring with HCR ManorCare could negatively affect revenue and cash flow.

But I think this is a really solid business. Is it available for a solid price?

Based on adjusted TTM FFO/share, the P/FFO ratio is 12.5. I consider that to be really attractive – consider that the S&P 500 trades for a P/E ratio of about 20 right now, which is comparable. Moreover, the current yield of 5.81% is more than 80 basis points higher than the five-year average yield of 5%. So there’s a pretty big spread there.

Could have a solid “deal” on our hands here. What’s a good price to pay? What’s the stock reasonably worth?

My analysis seems to conclude that this stock is trading somewhat significantly below its fair value, but I like to compare my analysis with that of some professionals that have taken the time to investigate the business and its stock, and come up with a reasonable valuation of their own. This adds additional perspective, which I think also adds value.

Morningstar rates HCP as a 4-star stock, with a fair value estimate of $53.00. 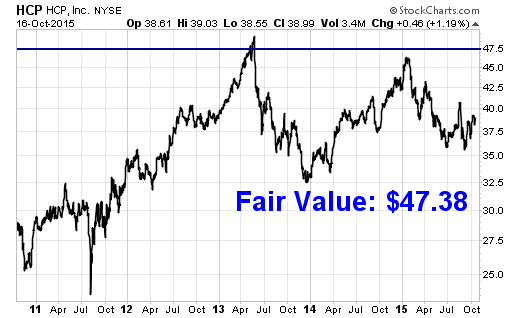 Bottom line: HCP, Inc. (HCP) is a REIT with multiple and lasting tailwinds on its side due to changing demographics here in the United States. Increasing demand for healthcare-related facilities is highly likely, and HCP is well positioned to capture a good chunk of that growth. The stock currently appears to offer 22% upside on top of a monster yield that’s more than 80 basis points higher than its recent historical average. I recently initiated a position before subsequently adding more. You may want to consider the same.