With the market trudging to its worst quarterly performance in four years, it is time to look for some of the deep value plays in the market that are significantly oversold and should appeal to long-term investors.

One of the themes that is playing out throughout the market is that large multinationals are seeing solid activity in the domestic market as second quarter GDP growth clocked in right near the four percent level.

[ad#Google Adsense 336×280-IA]Unfortunately, that level of growth is a pace that most of the rest of the globe can only dream about.

China’s economy is definitely decelerating, by how much is anyone’s guess as most forecasters give “official” economic statistics little credence.

Japan is contracting as of the last quarter and Europe is barely above stall speed.

Commodity based developed economies like Australia and Canada are being hurt by the collapse of energy and commodity prices, which is also slamming emerging markets like Brazil, Indonesia, and Mexico as well.

Solid economic readings at home are being overlooked as investors fret more about the impacts of the strong dollar and crumbling global growth prospects. This has led to quite a few large industrial concerns being deeply oversold in certain areas of the market. 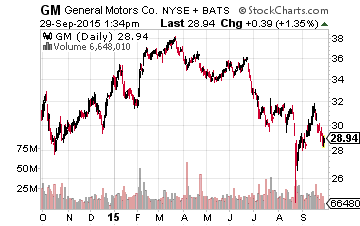 One of these are two remaining automakers headquartered right here in the U.S.A., Ford (NYSE: F) and General Motors (NYSE: GM), whose stocks have been weak despite cheap valuations, huge dividend yields and a strong domestic market.

The stocks have sold off mainly on overseas concerns including currency issues Fand a decline in oFverall auto sales in China. 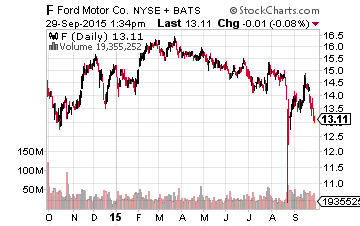 These concerns are more than priced into the equities at this point and worries about growth is the Middle Kingdom is a bit myopic on a longer term basis.

The automakers also have other potential catalysts few investors are grasping as panic grips the market.

Let’s take a look at why these automaker stocks are deeply undervalued outside of a global recession which is unlikely.

Let’s start with how cheap both of the shares of these iconic American manufacturers have become. Ford is now selling at less than seven times next year’s consensus earnings, less than half the overall market multiple. General Motors is even cheaper at under six times next year’s profit projections. Both companies are showing solid year-over-year earnings growth.

As importantly for putting a floor under the shares are their huge dividend yields. Ford yields nearly 4.5% after its recent decline and the stock of General Motors is getting close to a five percent yield. Both equities are yielding more than twice what 10 year treasuries currently are generating.

Domestic auto production is running at pre-crisis levels of about 17 million vehicles. Kelly Blue Book is forecasting that auto production will rise some 12% year-over-year to 1.39 million units when September numbers are reported this week. More importantly, it is the mix of sales that is providing a huge tailwind to automaker’s domestic profits.

Thanks to the collapse in oil over the past 15 months, gasoline prices have pulled back substantially over the last year. This gasoline “tax cut” is putting more money in consumers’ pockets. In addition, auto buyers are purchasing a much higher mix of lower mileage trucks and SUVs. Their share of the overall sales mix are at the highest levels since 2005.

This boosts profits significantly for both companies as trucks & SUVs have much, much higher profit margins than small or mid-size cars. This trend should continue as oil looks like it will stay lower longer than the majority of pundits thought even six months ago.

Yes, auto sales in China posted some small monthly declines over the past two months after years of robust growth. Some have stated this might be due to a reverse “wealth effect” as China’s stock markets are deep in bear territory.

However, this seems more like an inventory adjustment. Less than 10% of households in China have any exposure to the stock market so it hard to believe the decline in equity prices will have any long term impact to this type of economic activity. In addition, the market is hardly saturated. Only 20% of Chinese drive so longer term auto sales have years and years of solid growth ahead of them. The recent slowing of sales this summer will turn out to be a speed bump.

Much like what happened in the United States in 2009 and 2010, auto registrations and purchases have moved up nicely since the European Central Bank initiated its own version of “quantitative easing” in March. Sales are still barely above recessionary levels but should continue to benefit from additional liquidity in the credit and financing markets.

In addition, a huge scandal involving software that lead giant automaker Volkswagen to cheat on emissions standards have rocked the automaker and Germany. Although Volkswagen is not a major player in the United States, it is huge player in Europe.

The damage to Volkswagen’s reputation and the huge amount of fines it will eventually have to pay will significantly impact the company’s ability to be an effective competitor for quarters or years ahead. Ford’s and General Motors’ European operations should be a beneficiary of this debacle. It is also probably ironic to the latter automaker who is finally putting its own ignition recall scandal behind it.

While we go through this latest bout of volatility in the market I have been adding to my core positions in both of these automakers. They represent great long term value at present levels and I am perfectly happy to get a huge dividend yield while sentiment improves on the sector and rationality creeps back into the market at some point in the weeks ahead.

Bret Jensen thinks differently from most investors, and he is asking you too as well. In his new report, he reveals his top 5 blue chip stocks to buy now and reveals compelling research why some stalwart blue chips of the past are now ripping off investors like you in exchange for short-term performance. Is your portfolio prepared for the “Pump and Slump Scandal” of 2016?