It used to be a world leader in offshore oil exploration.

But now, thanks to bad management decisions, this oil giant is in trouble.

And they’re likely to fall even further…

Royal Dutch Shell (RDS-A) made headlines this week when it announced it will stop exploring for oil off the coast of Alaska.

The news shouldn’t have come as a surprise. The $7 billion project was a terrible idea from the start.

You see, there are several difficulties that come with drilling in the Arctic.

With these difficulties, the oil produced in the Arctic would have been among the most expensive in the world. Drilling there would only have worked if we had high oil prices.

But by July, the price of European benchmark Brent crude oil was less than $60 per barrel. That was a 48% fall from its high in June 2014. The decline made every other oil company with an Arctic plan in place at the time scrap it. But Shell decided to head north anyway.

It mobilized its massive polar drill rigs, the Polar Pioneer and the Noble Discoverer, and took 30 support ships and seven aircraft to the Arctic in July, according to the Wall Street Journal.

Now, Shell has come to the same conclusion as everyone else… that Arctic oil is too expensive to bother with today.

Losing $7 billion on a failed project is just the latest blunder from Shell’s management team.

I first discussed some of the company’s poor leadership decisions in my Stansberry Resource Report newsletter last November.

In May 2010, [Royal Dutch Shell] acquired East Resources, a private oil company, for $4.7 billion. This deal focused primarily on the Marcellus Shale in Pennsylvania. It also acquired 250,000 acres in the heart of the Eagle Ford Shale.

By 2010, both the Eagle Ford and the Marcellus were popular and expensive locations. Those investments didn’t work out so well. The cost to simply acquire land to drill was enormous, which had a direct impact on each well’s economics. Ultimately, the costs of operating in the area were simply too high. In 2013, Royal Dutch Shell took a pretax write down of $3 billion on its North American shale assets.

You can see the effect that poor management decisions are having on Shell’s share price in the chart below. 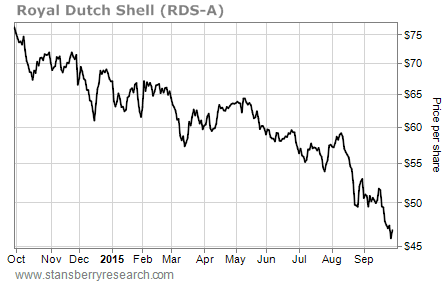 And the stock isn’t likely to recover soon.

As we’ve told you in these pages before, an excess supply will keep oil prices low for a while. This will put a strain on all oil companies… but Shell especially. You see, while most oil companies have been focusing on cost-effective exploration and production, Shell’s management team has instead been bleeding cash on boondoggles like the Arctic project. And as of right now, that seems unlikely to change.

In short, if you own this stock, I recommend selling now. Shares are likely headed lower.