wrong, and wrong for much longer than they projected near the end of 2014.

To be fair, there were events that came to fruition that would have been hard to factor in six months ago.

[ad#Google Adsense 336×280-IA]Both domestic and global growth estimates have come down significantly since the first of the year curtailing demand for energy.

The U.S. economy was expected to see 3.5% GDP growth in 2015 according to the IMF and other economic forecasters six months ago; but now it looks more like it will come in the same two percent growth levels we have been stuck in throughout the six years of what is easily the weakest post-war recovery on record.

Consensus forecasts for global growth have also come down.

A nuclear deal with Iran will also bring significant new supply onto the market when the agreement is finalized and global sanctions are finally lifted. In addition, even though rig counts have fallen by more than half from their peak; U.S. production levels are still at record levels. The fallout from plunging oil prices is just starting to be really start to felt across our economy.

On the downside, massive layoffs in the oil patch are one key reason wage growth in the second quarter came in at the lowest levels in over two decades. It takes a lot of clerks at Target or baristas at Starbucks to make up for each high paying rig worker that gets a pink slip.

The plunge in crude since last summer has also crushed the stocks of the exploration and production companies especially the small and mid-cap concerns in the industry. Many of these have already had to cut back on their capital expenditures severely, myriad firms have also had to restructure their debt and some have declared bankruptcy.

The carnage in this space is likely to continue if oil remains at these levels. However, the deep decline in oil also has beneficial effects throughout other sectors of the market and the economy. Let’s take a look at a few attractive companies where lower oil prices are going to be a substantial tailwind in the quarters ahead. 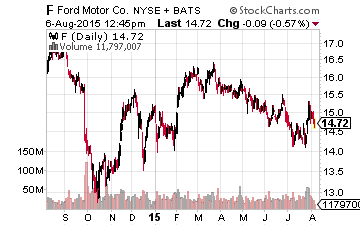 The percentage of overall vehicle sales these categories are garnering are at levels not seen in a decade and increasing.

This is critical to profits as these vehicle carry many times the profits per vehicle than their compact and midsize car offerings.

Profits should jump this year to $1.65 to $1.70 a share after the company posted profits of just under $1.20 a share last year. The consensus has this American manufacturing icon making north of $1.90 a share in FY2016. The stock goes for a paltry 8.5 times this year’s earnings consensus and also pays a dividend north of four percent.

I also like and own General Motors (NYSE:GM) as well but Ford is the pick here. It has a newer product portfolio, has less exposure to China and is not dealing with the aftermath of a recall debacle. 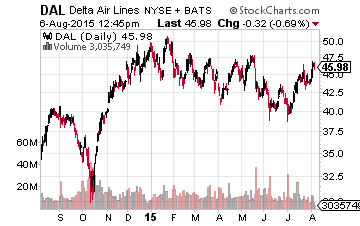 Obviously the transportation industry is a primary beneficiary of lower fuel prices given how much of operating costs that line item represents.

I like the airlines here. My top pick is Delta Airlines (NYSE: DAL) which is already seeing the impact to its bottom line due to lower jet fuel prices.

As its remaining hedges fall off and are set at lower levels, this benefit will accelerate.

This is starting to be reflecting in a sharp upward trajectory to earnings forecasts over the next few years. After earning approximately $3.30 a share in FY2014, the company is on track to a profit of around $4.50 a share this year. The consensus the airline earning north of $5.30 a share in FY2016, but I expect that to increase if fuel prices stay at these levels. The stock is cheap at just over eight times next year’s profit projections. 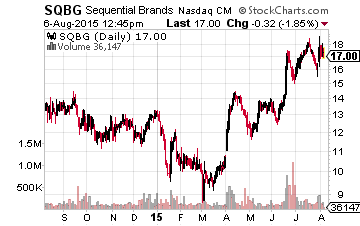 Low gasoline prices are giving consumers a “tax cut” which is slowly starting to find its way into the economy.

This will benefit consumer discretionary stocks including retail. I like brand licenser Sequential Brands Group (NASDAQ: SQBG) as a play on this theme.

The stock is up just under 25% since I first profiled the company in April but the shares still have upside.

The company is already benefiting from the recent acquisition of most of Jessica Simpson’s clothing lines which was immediately accretive to earnings and helped the company exceed expectations during its last quarterly report. Sequential also just acquired the business of Martha Stewart and I am projecting similar benefits.

I expect the company to continue to make accretive acquisitions and benefit from its “asset lite” business model where it outsources manufacturing which greatly lowers capital expenditure needs.

The plunge in oil prices has brought energy prices down to levels few would have predicted a year ago. The sudden decline is causing much pain in many sectors of the economy. However, investors can fuel the performance within their own portfolio by picking stocks of companies that will benefit from much lower energy prices in the quarters and quite possibly years to come.