What about if another, completely different stock is priced at $30 per share? That stock must be even better. Right?

The price of a stock tells you nothing other than what you’ll actually pay. It only tells you how many dollar bills you have to exchange for a share. That’s it.

Without knowing what a stock is worth, price has no context. There’s no relativity.

[ad#Google Adsense 336×280-IA]It’s really value that tells you what you want to know.

That’s why you always want to be armed with the knowledge and system necessary to properly value businesses and their stocks.

In that regard, you’ll want to pop over to Dave Van Knapp’s valuation guide, if you haven’t read it already.

I developed my own system years ago and I’ve used that system to value (and buy) high-quality stocks along the way to building out my six-figure portfolio.

But I don’t just value and buy any stocks; I focus solely on dividend growth stocks like those you’d find on David Fish’s Dividend Champions, Contenders, and Challengers list.

Mr. Fish’s document is an invaluable resource that contains the names of and information on more than 700 US-listed stocks that have all increased their dividends for at least the last five consecutive years.

These stocks are incredibly interesting. Open up that list and you’ll see a bonanza of blue-chip, household names. After all, a company can’t pay and increase a dividend for decades on end without doing a lot of things right, so that list tends to filter out a lot of the garbage out there, allowing me to hone in on quality.

And while I focus on quality stocks, I also try to score deals. I want to buy a stock at or below its intrinsic value.

Well, so that I can build in a margin of safety, decrease my risk, and potentially increase my income and returns.

While valuing stocks is part science, there’s a lot of art to it as well. And I don’t believe there’s any way too 100% accurately determine the exact value of a business. The best you can do is reasonably estimate what a company (and its stock) is worth.

But the cheaper you can buy and the further below your determined fair value you can grab a stock for, the greater the margin of safety present. That means if you’re at all wrong in your assumptions or a company doesn’t live up to expectations, you’re not left holding the bag (a bag which once held your money).

And since price and yield are inversely correlated, a lower price correlates to a higher yield. That means more income and more potential total returns over the long run.

As such, you can imagine why I was so delighted when I recently came upon a high-quality stock on Mr. Fish’s list that, after careful evaluation, appears to be priced much less than what it’s worth.

Bank of Nova Scotia (BNS) is a diversified and full-service financial institution and third-largest bank in Canada.

This bank is Canada’s most international institution, providing financial services to more than 21 million customers in more than 55 countries around the world.

Meanwhile, being based out of Canada comes with distinct advantages.

The Canadian banks are insulated fairly well from competition due to the regulatory environment.

In addition, lending standards in that country are stricter than they typically are in the US, meaning a complete meltdown akin to what US banks experienced in 2007 and 2008 isn’t nearly as likely, and why Canadian banks like BNS performed relatively well during that stretch.

Now, this might not be a household name when you think about collecting dividend income, but it probably should be.

First, their heritage is pretty incredible. The bank declared its initial dividend way back in 1833 (almost 200 years ago!) and has been paying continuously ever since.

And while they held the dividend static during the financial crisis, that’s a lot better of a situation to be in than a lot of major US banks that were forced to cut their payouts during that stretch. Meanwhile, they’ve resumed growing it again with five consecutive years of dividend raises.

And over that five year stretch, the dividend has been increased at an annual rate of 7.9%.

That’s really solid growth when combined with the extraordinary yield of 4.43%.

Not only is that more than twice as high as the broader S&P 500, but it’s also significantly higher than the stock’s five-year average yield of 3.9%.

If that’s not good enough, you’re also looking at a fairly low payout ratio of just 48.9%. That means the bank is sending out less than half its profit in the form of a dividend, which leaves them plenty of capital to invest back in the business. In addition, there’s a lot of room left for future dividend raises.

But without underlying growth in the business, the dividend will eventually stop growing and the investment won’t turn out very well. So we’ll see what kind of growth this Canadian bank has generated over the last decade across the top and bottom lines, which will gives us something to consider for the future. That will also help us value the business.

From fiscal years 2005 to 2014, revenue grew from $10.4 billion CAD to $23.958 billion CAD. That’s a compound annual growth rate of 9.72%, which is rather solid for a large bank… especially when considering the financial crisis occurred during this period.

S&P Capital IQ believes that EPS will growth will slow over the foreseeable future, however, due to low prevailing interest rates and tepid loan growth, predicting just 2% compound annual growth for EPS for the next three years. BNS’s underlying profit growth has been fairly secular over the last decade, though, highlighting their strength as an enterprise.

As expected, the bank maintains a very healthy and conservative balance sheet, future speaking to their quality. The long-term debt/equity ratio is just 0.10. Meanwhile, they maintain excellent credit ratings – A+ from Standard & Poors and Aa2 by Moody’s. Investment grade across the board.

Profitability is also excellent. Over the last five years, they’ve averaged return on equity of 18.62% and return on assets of 0.92%. Net interest margin across their multiple business segments remains attractive. And provision for credit losses as a percentage of average loans and acceptances on an annualized basis came in at 0.40% last fiscal year, even with exposure to volatile commodities in the home Canadian market.

Overall, this is a high-quality bank across the board. You’d expect it to be expensive. Is it?

The stock’s P/E ratio is 11.08 right now (on the NYSE shares), which is low in both absolute and relative terms. The five-year average P/E ratio for this stock is 12.4. And it’s obviously significantly lower than the broader market. In addition, as aforementioned, the yield is much higher than its recent historical average.

Could have a deal on our hands. What should we pay? What is BNS worth?

I valued shares using a dividend discount model analysis with a 9% discount rate and a 5.5% long-term dividend growth rate. I think that rate is conservative and even factors in a mild margin of safety. The payout ratio is low, the company continues to grow earnings faster than that, and recent dividend growth has also been over 7% per year. However, my enthusiasm is moderated by low rates and the forecast for tepid loan growth moving forward. The DDM analysis gives me a fair value of $65.11.

The stock’s quality is evident. And it might just be significantly undervalued here. But what do some of the professional analysts that track and value this stock think about it here?

Morningstar rates BNS as a 4-star stock, with a fair value estimate of $61.00.

I came in the most aggressive, but the stock is cheap by multiple measures. If we average out the three figures so as to smooth out the fluctuations, we get a final fair value of $61.07. That would indicate this stock is potentially 25% undervalued right now. If that’s not a deal, I don’t know what is. 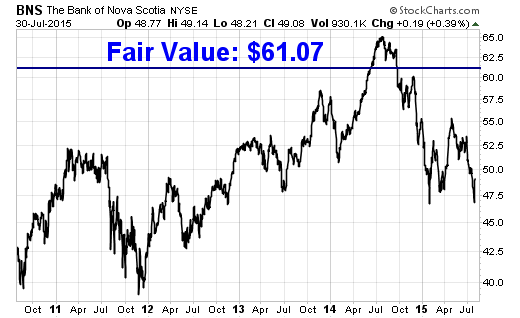 Bottom line: Bank of Nova Scotia (BNS) is a high-quality international bank that’s based in a country with favorable regulatory and lending environments. As such, their operational results through one of the most tumultuous periods in history for finance has been relatively fantastic. The dividend heritage is about as impressive as it gets and buying now locks in a yield that’s more than twice as high as the broader market along with the potential for 25% upside. I’d strongly consider this high-quality bank here.