I’m new to investing and am glad I found Wealthy Retirement. Marc often talks about the power of compounding, but I’d like to know, how long will it actually take me to double my money?

To answer your question, let’s turn to the most influential theoretical physicist of all time, Albert Einstein. Einstein is most famous for his theory of relativity and for determining the mass-energy equivalence (e = mc2).

In addition to being a scientific genius, he was also a financial one. He created one of the most important financial equations in history: the Rule of 72.

[ad#Google Adsense 336×280-IA]The Rule of 72 is the formula we use to calculate how long it takes an investment to double based on the fixed rate of return (ROR) it earns each year.

For those of you who love math, here is what the Rule of 72 equation looks like:

72 / ROR = number of years for an investment to double.

The Rule of 72 takes into account the power of compounding, Marc’s favorite investment strategy.

And while Einstein’s formula is not perfect, it comes pretty close more often than not. The table below shows how it works. Print it out and keep it near your computer… and your checkbook. 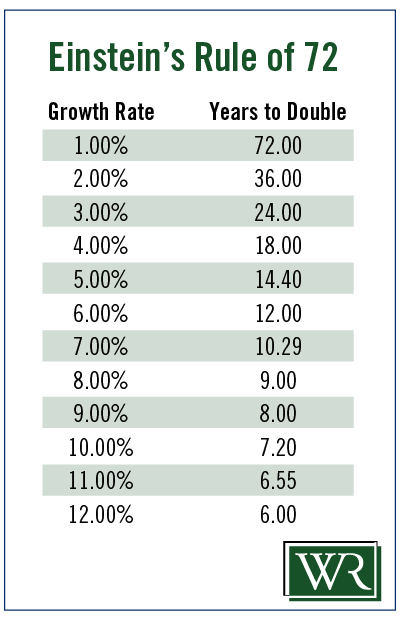 So, if your investment is earning a 4% return annually, your money will double in 18 years. Of course, if you are investing in a dividend-paying stock yielding 4%, the stock’s price appreciation will speed up the process and price decline will slow it down.

The Rule of 72 also explains what happens to the money you don’t invest. Inflation is the nemesis of nervous investors who insist on parking their money in a savings account or under the mattress. Most try to ignore inflation. But the Rule of 72 shows it will have a bigger impact on their spending power much sooner than they expect.

Assuming 2% inflation, money that sits still will be worth half of what it is today in just 36 years. That should be a sobering wake-up call for anyone with a large chunk of their retirement money sitting in a bank account.

You can also use the Rule of 72 to calculate the ROR needed to earn a specific amount in a certain number of years. For example, if an investor needed to double their money to be able to retire in 10 years, you would divide 72 by 10. The answer, 7.2%, would be the growth rate an investor would need to hit to meet their goal.

Clearly, this can help investors determine the amount of risk they must be willing to take to achieve their desired end point.

But wait, there’s more! The Rule of 72 doesn’t apply to only dollars and cents. It works on anything that grows. For example, if the world’s population is growing 1% each year and the rate of growth continues, there will be twice as many people living on Earth in just 72 years!

Einstein’s principle is a great tool for new investors because it’s a quick and easy way to showcase the power of compounding. The numbers are fairly simple. The amount invested doesn’t matter. Whether you invest $1,000, $10,000 or even $1 million is irrelevant. We just want to know when it will double.

A small amount invested today can become twice as much tomorrow. Now you know when tomorrow will be.