I love gold right now, not despite, but because of everything that’s happened to it this month…

Now, it’s true that the “race to $1,000” triggered by the July 20 Asian bear raid appears to have the yellow metal on the ropes.

Television’s talking heads (plenty of whom are actually short gold) say that it’s “too early to call a bottom,” or that gold “has the potential to sink to $700.”

[ad#Google Adsense 336×280-IA]Now, I don’t expect another 35% dip in gold, but even if they’re right, those television pundits are still missing out on one of the year’s most lucrative gold opportunities taking shape now.

They’re just not seeing what I’m seeing in these charts.

Have a look at this…

Miners Are Plunging Faster Than Gold Itself

The SPDR Gold Trust ETF (NYSE Arca: GLD) is one of the most popular gold exchange-traded funds because it’s one of a few that actually own physical gold.

It’s been dropping since February, from highs of more than $125 to recent lows of around $105.

That’s an 18% drop, but that’s nothing compared to the miners.

The Market Vectors Gold Miners ETF (NYSE Arca: GDX) tracks a “basket” of gold mining companies, and it’s down more than 40% since February. 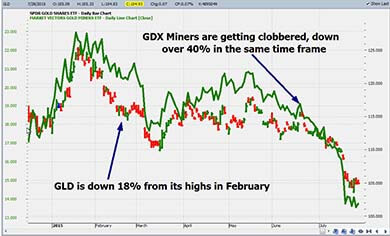 And there you have it: Miners are getting clobbered much more than the physical metal.

There’s a very interesting reason for this…

It’s all about earnings, or in this case, the critical lack of them.

You see, the cost of equipment, labor, and production gives these companies a good idea of what it will cost to mine an ounce of gold.

No matter if gold rises or falls, companies’ mining costs remain the same. So unless miners are hedging (selling) tomorrow’s gold with today’s prices, they’re more reactive to the price swings in gold.

There’s a huge value bid in the drop here…

There’s a Good Play… and There’s the Best Play

We can use options to hedge our risk and take advantage of the potential in this odd relationship I’ve uncovered.

But buying this option, you really need the stock to move over 5 points to double in value. That’s a 25% move in GDX. We’re actually looking for about half that move.

And that brings me to the best strategy – the spread, or “loophole,” strategy…

And it gets better…

That’s right – we’re still getting better than a double, but we need much less movement on the underlying stock.

Our “loophole” spreads make it easy (and affordable) to get bullish or bearish, and they can also increase returns with much smaller moves on the underlying stock. That’s why they’re one of my favorite trades.