Robert Friedland is arguably the most successful natural resource investor in the world.

Over the years, Friedland has found and developed the world’s fourth-largest nickel deposit, one of the world’s largest copper deposits, and the largest gold deposit in Alaskan history – generating billions of dollars for himself and his investors.

[ad#Google Adsense 336×280-IA]So when Friedland talks, I listen. And right now, Friedland is bullish on copper…

On Tuesday, I heard Friedland speak at the Sprott-Stansberry Natural Resource Symposium in Vancouver, Canada.

The copper price has taken a beating over the past four years… falling 48% from its 2011 high. 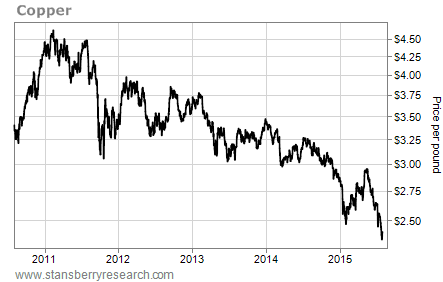 The decline in prices has caused copper producers to fall, too. For example, shares of giant copper producer Southern Copper are down 44% from their January 2013 high.

But Friedland believes copper prices will head higher over the next year or two.

You see, copper is a leading economic indicator. It’s in everything from cars to air conditioners to cellphones. Because of this, it tends to boom and bust with economic cycles.

However, Friedland says the outlook for the global economy going forward is positive.

In his presentation, Friedland pointed out that in the U.S., the Federal Reserve is going to raise interest rates because the economic recovery is well underway. He also dispelled fears about China’s economy stalling. (Friedland came to Vancouver from his home in Beijing, so he has more local insight on China than the average Westerner.)

Likewise, if the Chinese economy stalls – and many people think it has – its commodity consumption could sink.

According to the World Bank, China’s economic growth will be around 6.8% this year. The U.S., on the other hand, should grow 2.5%… and the eurozone is expected to grow 1.5%.

And while China’s growth is expected to slow to 6.0% by 2017, the government will likely use monetary and fiscal policy (similar to quantitative easing in the U.S.) to prevent a rapid decline.

That means demand for metals from China should at least hold steady for the next few years.

Meanwhile, many mines have been shut down because of low metals prices. And few new mines are being built. That means copper supply is falling. Steady demand and falling supply will lead to a massive surge in price in a year or two.

Friedland doesn’t think we’re at the bottom yet, but he believes we are close. And when the bull market returns, it will send copper prices and copper producers soaring. I recommend putting the sector on your “watch list” today.