A couple of themes are playing out as the market continues to hug the top end of a relatively tight trading range where it has spent most of 2015 within. The first is that there is a complete lack of earnings growth on a macro level.

When second quarter earnings reports are tallied up; we are likely to see flat year-over-year earnings growth in the first two quarters of the year.

[ad#Google Adsense 336×280-IA]This is despite most companies easily stepping over reduced quarterly profit estimates in both the first and second quarter.

The primary factors in the dismal earnings performance are a tepid global economy, a strong dollar, and collapsing energy company earnings.

Revenue growth is nonexistent and is slightly negative at the moment.

Factset is projecting we will not see year-over-year revenue growth for the S&P 500 until the first quarter of next year.

Currency impacts are hitting American multinationals very hard, but thanks to stock buybacks and high historical operating margins, earnings are at least holding on to flat growth. One of the results of this is that investors are bidding up anything that is showing solid revenue growth to astronomical valuations.

Some of the best performing large cap stocks are selling at over 100 times forward earnings, that is, if they have earnings at all. Investors only seem to care about revenue growth at the moment. These well-known momentum stocks include Tesla Motors (NASDAQ: TSLA), Netflix (NASDAQ: NFLX) and Amazon (NASDAQ: AMZN). The five biggest stocks by market value account for all of the performance from the NASDAQ in 2015. Of those, only Apple (NASDAQ: AAPL) sports a reasonable valuation.

Investors looking for stocks that are showing good revenue & earnings growth need to look at some of the off the radar smaller cap names that are relatively underfollowed by the street. These domestically focused plays also have the benefit of not being exposed to a slow global economy or a rapidly rising dollar.

I think an increasingly robust housing market is one place to look as it is one of the few areas of the economy that seems to be accelerating at the moment. June new home sales came in with their strongest numbers in seven years. This strength looks like it will continue as housing starts recently came in at an annual rate of just over 1.34 million for June, with multi-family starts being especially strong.

This is up over nine percent from the level from May and more than 25% higher than a year ago. Finally yesterday, the National Association of Realtors reported a 3.2% gain in the seasonally adjusted annualized rate of existing home sales to 5.49 million in June. This is up almost 10% year-over-year. 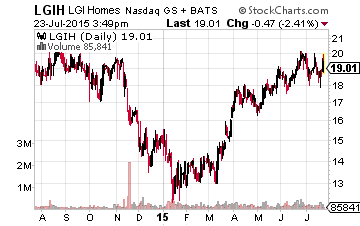 LGI Homes (NASDAQ: LGIH) is a small home builder I continue to like despite its strong performance over the past three months.

The company is expanding its geographic footprint outside its home state of Texas and showing strong revenue growth.

Revenues are tracking to nearly 50% growth this year with another 25% increase projected for FY2016.

Earnings should more than double from FY2014 to FY2016. The stock is dirt cheap at under seven times next year’s earnings projections. 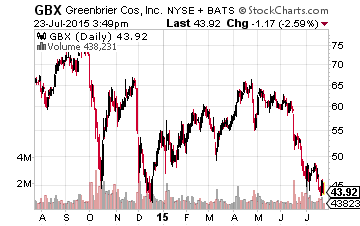 Rail car makers have taken it on the chin this year due to the fall in crude oil prices.

This has caused orders for oil tank cars to fall some 70% year-over-year in the second quarter.

The decline in Greenbrier Companies (NYSE: GBX) presents a great long-term entry point for both value and growth investors.

The company has garnered more than 40% of new orders across the industry over the past 12 months. In addition, of the approximate $3 billion in new railcar orders the company have received over the past year, 80% have come from outside the energy sector.

In the company’s last completed quarter, the company worked off less than 1,000 railcars in its order backlog which still stands at over 45,000 rail cars. This is more than two years’ worth of production at current run rates even if no new orders come in over that time frame.

Sales should increase some 20% year-over-year this fiscal year. Like LGI Homes, earnings per share should roughly double between FY2014 and FY2016. With the recent pullback, the stock sells for just over seven times forward earnings and has a five year projected PEG significantly under 1 currently at .64

Both of the domestic concerns are selling at about half of the overall market multiple based on forward earnings despite superior growth prospects. They represent deep value in what is increasingly looking like an overbought market.