Products that are available in more than 200 countries.

Twenty $1 billion brands among the more than 500 brands they offer.

[ad#Google Adsense 336×280-IA]Products that are available at more than 23 million retail customer outlets.

They have 250 bottling partners across 900 plants.

Their brand was ranked by Interbrand as the third most valuable brand in the world, with a 2014 value of $81.6 billion.

Superlatives across the board here.

Beverages stretching from carbonated soft drinks to fruit juices to sports drinks to tea and water.

And they’re in a wonderful spot because their products are in demand from billions of customers around the world, every single day.

You can probably see now why Warren Buffett is such a huge fan – it’s one of the largest single positions in Berkshire Hathaway Inc.’s (BRK.B) common stock portfolio.

I’m also a huge fan, and own a slice of the company in my own portfolio. Although, my position is just a tad smaller than that of Berkshire’s.

Coca-Cola has long been a blue-chip stock. Founded in the late 1800s, they’ve demonstrated a type of staying power and ability to adapt that few other companies have.

Of course, at the heart of all that is this fantastic business model that’s built on simplicity, ubiquity, and delivering the products that people around the world demand and enjoy.

These products include the likes of their namesake Coca-Cola, Sprite, Dasani, Powerade, Simply Beverages, Fuze, vitaminwater, Fanta, and Minute Maid.

And while the media might have you believe that the death of carbonated soft drinks (and perhaps even Coca-Cola) is imminent, that’s just not true.

However, even while demand for carbonated soft drinks wanes across the world (especially in developed countries), Coca-Cola’s diversification across still beverages is more than making up for that. And we can see that in their volume. For instance, total unit case volume was up 2% for their most recent quarter, Q2 2015 – gains in both sparkling and still was present.

Not only that, but the company’s diversifying away from their core brands and beverage products via strategic partnerships with other companies.

The 16.7% stake in Monster Beverage Corp. (MNST) and 16% stake in Keurig Green Mountain Inc. (GMCR) are examples of this. The former gives the beverage giant exposure to fast-growing energy drinks, while the latter gives them exposure to single-serving coffee and allows them to provide customers an opportunity to brew Coca-Cola beverages at home.

This juxtaposition between what some think about Coca-Cola’s products and their actual results plays out in their financial results over the last decade as well.

Profit growth hasn’t been quite as strong, although currency effects have taken a toll on the company’s results lately. Earnings per share increased from $1.02 to $1.60 over this period, which is a CAGR of 5.13%.

S&P Capital IQ is predicting that EPS will grow at a compound annual rate of 5% over the next three years, citing favorable results from share repurchases and volume/price increases offset by foreign currency exchange rates. If the strong dollar reverses itself somewhat, Coca-Cola’s results could very well surprise to the upside, in my view.

Now, while Coca-Cola’s stock price moves up and down every single day, its dividend tends to move only in one direction: up!

We know that because the company has increased its dividend to shareholders for the past 53 consecutive years.

So that means for more than five straight decades, shareholders have been collecting growing checks from the company. How fantastic is that?

Got bills to pay and bills keep going up?

Well, the checks are coming in from Coca-Cola and they’re increasing year in and year out.

But not only are those dividends increasing, they’re doing so at a really attractive rate. Over the last decade alone, the company has increased its dividend at an annual rate of 9.3%. That kills inflation over that time, meaning shareholders’ purchasing power is actually increasing over time.

The dividend has grown faster than EPS over this time frame, leading to an elevated payout ratio of 77.2%. However, that’s due in large part to currency fluctuations rather than a problem with underlying operations.

Meanwhile, the stock offers up a yield of 3.26% right now. Not only is that higher than the five-year average of 2.8%, it’s also substantially higher than that of the broader market.

KO offers a market-beating dividend that’s growing annually like clockwork. Not much to complain about there.

The company’s balance sheet is also very solid. A long-term debt/equity ratio of 0.63 and interest coverage ratio north of 20 both indicate that Coca-Cola has no problems with leverage or its ability to pay interest expenses.

Profitability, as probably expected, is rather outstanding. Over the last five years, the company has averaged net margin of 20.92% and return on equity of 29.26%. Great averages, though I am a bit concerned by the fact that both metrics have been in decline over the last few years. Overall, though, these numbers compare well to the industry, but it is somewhat difficult to accurately compare Coca-Cola to anyone since they really lack a true peer.

Again, this company operates in superlatives across the board. They’re the world’s leader in a variety of beverage categories, with dominant exposure to sparkling and still non-alcoholic beverages both here in the US and abroad.

And it’s that international exposure that is really exciting. As middle classes around the world continue to grow and expand, demand for the types of products that Coca-Cola manufactures and markets will very likely grow as well.

This is something else we see playing out in recent results. While Q2 case volume growth was somewhat tepid in Europe and North America, there was plenty of volume growth (in percentage terms) in Eurasia & Africa and Asia Pacific geographical segments.

The company should remain entrenched and dominant for years to come by virtue of their significant competitive advantages. Massive economies of scale, a brand name built on quality and consistency, and a global distribution network are all unrivaled. And because the company commands large swaths of retail space available to the types of beverages the company markets, it’s unlikely any competitor could mount a frontal assault on Coca-Cola’s position.

Of course, there are risks to consider. The industry they operate in is heavily competitive. And currency effects could continue to harm their financial results for the foreseeable future.

Looking at the valuation, the stock is available for a P/E ratio of 23.75 right now. That does compare unfavorably to the stock’s five-year average of 18.6, but depressed earnings due to currency volatility have skewed their results negatively.

I valued shares using a dividend discount model analysis with a 10% discount rate and a 6.5% long-term dividend growth rate. I think that’s a conservative long-term growth rate when looking at recent results, the elevated payout ratio, and the current currency headwinds. That appears to be building in a margin of safety, in my view. The DDM analysis gives me a fair value of $40.17. 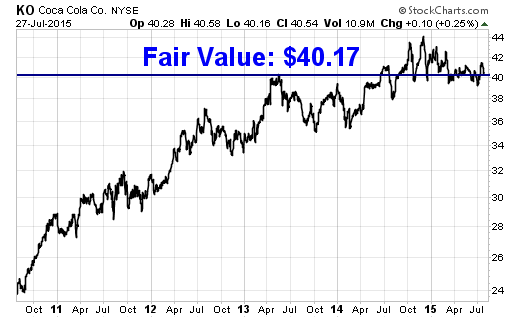 Bottom line: The Coca-Cola Co. (KO) is the world’s preeminent non-alcoholic beverage company with 20 $1 billion brands spread out across the spectrum of beverages. Their diversification within beverages, strategic partnerships, economies of scale, and brand power all confer significant competitive advantages. The stock appears roughly fairly valued right now, though paying a fair price on a high-quality business such as Coca-Cola in an expensive stock market doesn’t strike me as a bad idea at all.