Natural resources go through huge cycles of boom and bust.

[ad#Google Adsense 336×280-IA]The prices of commodities are based largely on supply and demand.

But if supply outpaces demand, prices will fall.

Nickel is a critical component of stainless steel, which is used in construction, cars, cookware, jets, and appliances.

Thanks to increased consumption from China in the mid-2000s, demand for nickel rose faster than supply… and prices soared from around $5 per pound in November 2005 to more than $24 per pound in May 2007.

At the time, Chinese demand for stainless steel seemed endless. Executives from the world’s largest nickel producer, Norilsk Nickel, said “demand from China will keep prices close to a record.”

With high prices, producers could afford to bring more expensive nickel mines online. For example, in 2007, mining company Xstrata acquired Jubilee Mines for $2.9 billion to gain control of its Cosmos nickel mine.

Jubilee produced about 26.4 million pounds of nickel in 2007, with plans to ramp up to 66 million pounds by 2012. So in effect, Xstrata paid nearly $110 per pound of nickel production, with the hope that production would grow and cover the cost.

But then the global financial crisis hit… demand dropped… and nickel entered “bust” mode. As you can see in the chart below, nickel prices ran full circle. They are down nearly 80% from their 2007 peak. Today, a pound of nickel is worth around $5.35. 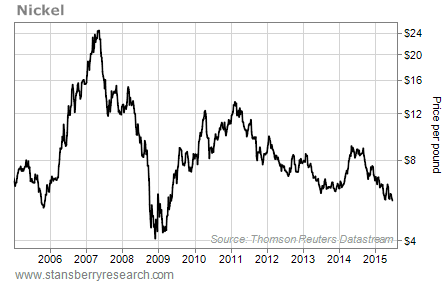 Now, years of low prices have made many nickel mines uneconomical. So producers are shutting down and selling off expensive mines.

Western Areas is getting the mine for less than 1% of the original purchase price in 2007. That means Glencore is losing $0.99 for every dollar Xstrata invested in the original Jubilee deal. Bloomberg Business has called this “one of the mining industry’s most value-destructive deals.”

And Glencore isn’t the only giant miner unloading once-expensive nickel mines. Barrick Gold is looking to sell its Kabanga nickel project in Tanzania, which it operates with Glencore. And Vale, the world’s second-largest nickel producer, also has assets on the auction block. Those include the iconic Voisey’s Bay nickel mine in Canada.

You see, the low nickel price is killing off production. Expensive mines are being shut down and sold off.

But we still need stainless steel to make things like appliances and cars. We still use it in construction. And countries like China still need it to continue to develop.

So with production dropping, eventually, demand will outpace supply again… prices will start to rise… and nickel will enter a “boom” phase again.

We’re not there yet, but deals like Glencore’s tell me we’re getting close.