There are a few certainties in life.

It’s said that death and taxes are it.

But I’d recommend adding one more to the list.

It’s certain that people across the world will continue to consume alcoholic beverages.

Moral ambiguity aside, there have been studies that have suggested that humans developed a taste for alcohol as far back as 10 million years ago.

[ad#Google Adsense 336×280-IA]We know wine and other alcoholic beverages were quite popular in antiquity, if you could afford it.

And we know that the industry is currently booming, with the likes of whiskey, vodka, and tequila extremely strong – tequila sales alone have doubled over the last decade.

The odds of people consuming less alcohol in the future is also fairly unlikely – an ever-growing global population just adds to the potential client pool.

And we know that alcohol is unlikely to ever be banned in a developed country again. Prohibition didn’t exactly go over very well.

This is why I love the idea of investing in a company like Diageo PLC (DEO).

They produce, market, and sell a variety of alcoholic beverage brands across more than 180 countries.

These brands are incredibly iconic and successful, with many leading the world in sales in their respective category.

So what does this mean for us investors?

Let’s take a look at their growth over the last decade, before moving on to some other fundamentals. We’ll see just what kind of quality and investment potential we’re working with here.

Earnings per share is up from £1.85 to £3.57 over this period, which is a CAGR of 7.58%. Not bad growth at all for a blue-chip stalwart where the risk is seemingly quite low.

S&P Capital IQ is calling for the good times to keep on rolling: They predict that DEO’s EPS will continue compounding at an annual rate of 8% over the next three years.

What more do we want?

Oh, how about a dividend. After all, shareholders own a publicly traded company. As such, they should expect their fair share of profit via dividend payments.

They’ve increased their dividend payout to ADR shareholders for the past five consecutive years, meaning your purchasing power in dollars is steadily increasing. That qualifies them as a “Challenger” on David Fish’s Dividend Champions, Contenders, and Challengers list.

And over that five-year period, the dividend has grown at an annual rate of 8.3%. That’s in line with underlying per-share profit growth, meaning it’s sustainable.

Converting their results to dollars and assuming the final dividend remains unchanged YOY (it’ll actually likely be increased), the payout ratio is 59.4%. That’s a really good mix between retaining earnings and sending shareholders their rightful share of profit.

Meanwhile, you’re also getting a fairly attractive yield of 2.86% on the stock right now.

So you’re getting yield well in excess of that of the broader market along with growth much higher than the rate of inflation.

Looking at the balance sheet, we can see some leverage. I’d like to see this improve at some point, but it’s not worrisome as it stands. The long-term debt/equity ratio is 1.12 and the interest coverage ratio is just under 6.

While the balance sheet isn’t stellar, profitability is. Over the last five years, DEO has averaged net margin of 20.25% and return on equity of 40.74%. These are outstanding numbers, highlighting the strength of the business as well as the attractiveness of the industry.

There’s a lot to like here. An easy-to-understand industry with products that people have been craving for centuries, an incredible business model with distribution across all corners of the globe, an approximate 27% share of the global market, huge margin, and a dividend that’s attractive and growing.

With all this, the stock is probably as in-demand as the products the company sells.

The P/E ratio for DEO is 23.90, which is higher than the five-year average of 19. But EPS is depressed somewhat due to currency effects. Most other metrics are in line with their five-year averages.

I valued shares using a dividend discount model analysis with a 10% discount rate and a 7% long-term dividend growth rate. That growth rate is slightly below that of EPS and dividend growth over the last decade, and also below the forecast for underlying profit growth over the foreseeable future. Factoring in the low growth and likelihood for the company to deliver that, I think there’s a margin of safety there. The DDM analysis gives me a fair value of $119.13, indicating the stock is roughly fairly valued here. 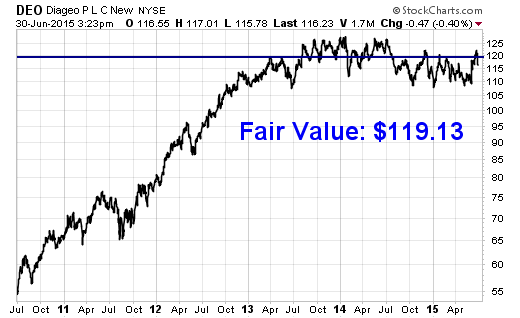 Bottom line: Diageo PLC (DEO) is the world’s leading producer and marketer of branded spirits. They have a commanding share of the global market and the business model is solid from top to bottom. You have to like the odds that DEO will not only continue to sell its high-quality alcoholic beverage brands for years to come, but will more than likely sell more and more. That means increasing revenue, profit, and dividends. I’d strongly consider DEO as a long-term investment right now.