Today, I’m going to cover a powerful investment secret that took me two decades of reading and thinking to figure out.

This investment secret will show you how to build a portfolio that I believe will make you money in almost any market condition. The ideas in today’s essay will allow you to make money in the stock market even when you’re bearish or afraid of stocks in general. And here’s the best part: These ideas will also show you how to outperform in bull markets.

In this installment of the three most important concepts of investing, you’ll learn how to make money even when you’re dead wrong about the market as a whole or the sector you’re buying.

[ad#Google Adsense 336×280-IA]Let’s get started by using the example of homebuilder NVR (NVR).

I first recommended NVR in my Investment Advisory when it was trading for around $449 per share in 2007.

This was after the housing crisis had begun. NVR’s stock had sold off substantially, and it was trading for a low multiple of its cash earnings.

I knew NVR was the best business in the homebuilding sector by a wide margin. I knew it would survive the mortgage crisis.

And I predicted that investors who were smart enough to buy it during the crisis would make a lot of money. Today, it’s trading for almost $1,400 per share. It was profitable throughout the housing crisis of 2007-2011.

Even if you had bought NVR at the worst time possible (at its peak in 2005, just before the housing crisis began) you would still have nearly doubled your money in 10 years.

This is an extreme example of how you could have made money even if you had bought into the worst sector at the worst time imaginable. And by the way, if you really didn’t know that real estate and homebuilders were in a bubble by 2005, you must have been living in a cave… or a drug-induced state of euphoria. Even mainstream financial magazines were warning people about the madness in residential real estate.

So what’s the secret? How did I know that NVR would thrive despite the crisis? It’s simple… and you’ve seen me write about it for years and years: NVR was (and still is) the most capital-efficient homebuilder in America by a wide margin.

As regular readers know, a capital-efficient business is able to generate outsized returns without investing heavily in expensive machinery, research and development, or factory maintenance. One of the main symptoms of capital efficiency is the ability to pay large sums of money back to shareholders.

This incredible capital efficiency means that if you own NVR, you don’t need to depend on gimmicky “earnings growth” or a “greater fool” who is willing to pay too much for your shares. You can just sit there and earn massive profits year after year because the company is producing huge cash returns for its owners. Yes, you’ll certainly make more money if you’re able to buy the stock at a low point. But as long as you pay a reasonable price, you’re nearly certain to do well… no matter what else happens in the markets.

Even if you had bought this stock at the worst time to buy a housing stock in your entire life, you would have still done OK because of this company’s highly capital-efficient business model.

Now… here’s the secret. A few types of companies are always capital efficient because of their structures.

On the other hand, P&C companies can (and do) have different underwriting strategies. For high-quality underwriters, capital is not merely cheap, it’s “less” than free. If you’ve ever paid for homeowners insurance and never made a claim, you know it’s the insurance company’s customers that provide all of the capital – and more – that’s required to operate it. 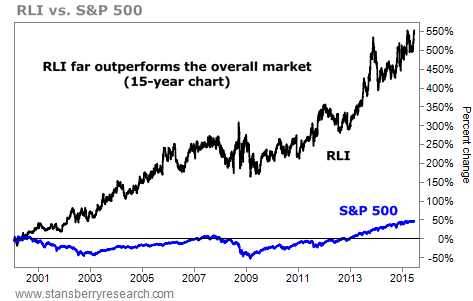 RLI is a small P&C insurance company that has almost always been the highest-ranked underwriter in the Stansberry Data Insurance Value Monitor, where we track high-quality insurance companies. The chart above shows you the performance of its stock over the last 15 years – an investment lifetime for most people. This gives you some appreciation for what’s possible for an investor who can identify truly capital-efficient businesses. We’ll help you find them, but it takes thinking to understand their advantages and discipline to stick to only owning companies like these.

Obviously, most investors want some diversification. And we don’t recommend only investing in insurance companies. But we do want to note that in 1947, Shelby Davis invested $50,000 in just 12 high-quality P&C companies. He never sold them or traded them. By the 1980s, he was on the Forbes 400 as one of the wealthiest people in the world.

Davis is the only person we know of who became a billionaire simply through passive common-stock investments. Likewise, we know investing legends Ben Graham (perhaps the most famous investor of the last 100 years) and Warren Buffett earned most of their common-stock investment returns through insurance companies. We are certain that sticking with insurance would lead to vastly better investment results for most individual investors.

There’s another kind of business that’s almost as capital efficient as insurance and that can operate in just about any sector. These firms are the absolute best way to invest in almost any industry or trend. I’m talking about royalty companies. These firms raise capital and then invest in operating businesses. But rather than buying stock or lending on credit, these companies buy a small percentage of the company’s future revenue. Royalty rates vary, but they’re typically between 5% and 10% of all future revenue. That adds up.

Lots of investors know about resource-focused royalty companies. The most famous (and one of the best) is Franco-Nevada (FNV). Most investors know that owning gold over the last five years hasn’t been a great bet. (It’s down around 5%.) But even if you bought gold at just about the worst possible time in the last 20 years, if you bought gold via exposure to Franco-Nevada’s royalty streams – its stock – you’ve done well. You’re up more than 60%… 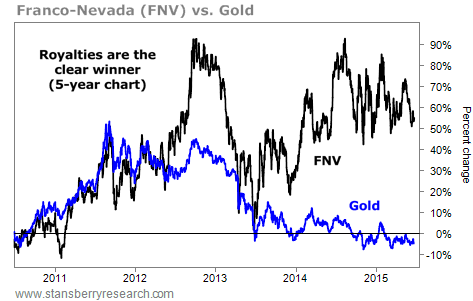 Here’s the secret: Royalty companies aren’t limited to resources. In fact, most of the best companies we cover in terms of capital efficiency and quality are actually “hidden” royalty companies.

Take fast-food giant McDonald’s (MCD), for example. Most investors think of McDonald’s as a restaurant business and they know that most of the time, investing in a restaurant is a bad idea. But what they don’t see is where McDonald’s gets most of its revenue. It’s not from its restaurants… it’s from its franchises. McDonald’s earns rich royalties from all of its franchised locations. Meanwhile, it’s the storeowners who must put up all of the capital for these restaurants.

Coke sells syrup for the same reason that McDonald’s sells franchises. It’s a way of putting most of the capital costs associated with the business on the back of a local partner. It’s the bottlers who have to pay for almost all of Coke’s capital costs by building the local bottling plants and supplying all of the trucks needed for distribution.

If you think about this idea for a minute, it’s simple to grasp. Take two stocks in the same industry. One has zero capital costs. It’s a royalty firm, in one form or another. The other is a typical corporation that continues to reinvest its profits in capital projects. After all, almost all companies require capital to grow.

I believe these ideas can make anyone a vastly more successful investor. I hope they do so for you. And I hope today’s essay was helpful to you and helps you understand why it’s critical to focus on capital-efficient companies… These are the companies that have proven to do well no matter what happens to the stock market as a whole.