If you’ve been following my series this week, you know we’re working our way through the desert – the Rub’ al Khali.

That’s the “Empty Quarter,” the vast sand desert that lies in the heart of the Arabian Peninsula. Lose your way here, and you’re dead within hours. It’s the perfect metaphor for the world’s financial markets. There are very few trustworthy landmarks.

And the “sands” are constantly shifting; making what was true or profitable last year a dead end this year.

I was inspired by the story of three men who were struggling with addiction and decided the way for them to overcome it was to do the hardest thing they could imagine – walk unassisted across the Rub’ al Khali.

No one had ever done it before.

The biggest problem with trying to walk across this desert wasn’t only carrying enough water, it was the giant sand dunes, some 800 feet tall.

First and foremost, most investors simply don’t understand what kinds of businesses make for good, long-term investments. I introduced a four-part test to help you identify great businesses. The next most important “desert crossing” skill to learn is how to make money even when you’re dead wrong about the market overall.

The final skill you’ll need to cross the desert is to learn how to avoid the “herd” like the plague.

Most of the time, avoiding the herd is easy. I don’t think many of my Investment Advisory subscribers are tempted to invest in the kind of stocks you’ll find on our “Black List” – companies whose shares are valued at more than $10 billion and trade at more than 10 times their annual revenues.

There are only a handful of businesses created every decade that are worth this kind of valuation. And even if they’re worth it, it’s almost dead certain that, sooner or later, you’ll have the opportunity to buy in at a much more reasonable price.

As a current example of what usually happens to these kinds of stocks, I’d point to the social-media service Twitter (TWTR) and online review site Yelp (YELP). Twitter is currently on our list, trading at $24 billion in market cap and 14 times sales. Yelp is a former Black Lister and currently trades at $3 billion in market cap and eight times sales.

Both of these companies have serious business problems, but have been hyped by promoters and have caught the public’s eye. Meanwhile, they’re both down big over the past two years, and both suffered falls of more than 50% from their peaks. Out of the two companies, I think Twitter has a much better future ahead of it, but at current prices, I wouldn’t touch either stock. 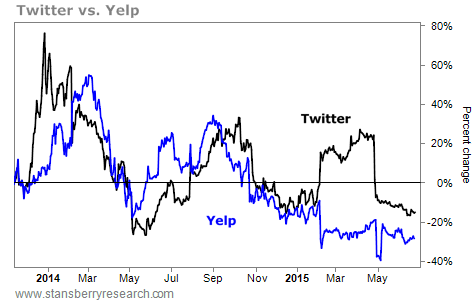 At other times, though, the passions of the crowd aren’t as easy to see. Take our recent recommendation of Coach (COH), the legendary handbag maker. The main reason we bought the stock is that this is a great business, with a great brand. We believe it’s almost inevitable that in five, 10, and 30 years, Coach will be selling many more handbags and earning far higher profits than it does today.

Many subscribers, though, criticized our recommendation. They argued that new brands, like Michael Kors, were going to wipe out Coach. Fashion is an area of the market where you should always “fade” the crowd. There are few permanent fashion brands. We doubted Michael Kors would become one. So to us, buying a well-proven, 50-plus-year leader in handbags made a lot more sense, especially considering the stock’s low price (relative to cash earnings). Here’s what has happened over the last year between Coach and Michael Kors… 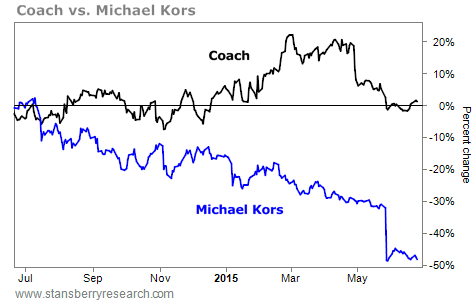 One final point about avoiding the crowd… If you plan to invest in commodities or commodity-type businesses, you must avoid the crowd at all costs. Commodity-type businesses have no way to protect their profit margins from competition, which means it’s only a matter of time before these companies suffer a serious collapse in profits. It may take years for enough competitors to go out of business, allowing the cycle to repeat.

Buying a commodity or a commodity-type business after a 100% or 200% rally is likely to be financial suicide. It takes a long time for cycles to turn – usually about twice as long as anyone expects.

Take uranium, for example. Back in the mid-2000s, uranium was the hottest commodity around. My friend Rick Rule organized several large investment funds to buy uranium back in the late 1990s as he correctly judged a severe mismatch between current supplies, current prices, and the known demand of the global market. He was right, and investors in his funds did incredibly well. They made more money than I can imagine. 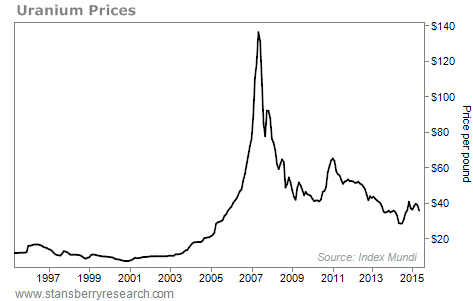 At the investment conferences I attended as a speaker in 2006 and 2007, everyone wanted to know my opinion about uranium. That was odd because I’m not a commodity or a resource expert and don’t claim to be one.

Rick Rule, a bona fide resource expert, couldn’t even hold off the crowd in the bathroom. I’m not kidding. At the New Orleans Investment Conference in 2006, I saw attendees crowding around Rick while he was in the men’s room. They all wanted to know what uranium stock to buy. I looked at Rick (who, at 6’4″ I could easily see above the crowd) and quietly reminded him that it’s awfully hard to be a contrarian when you’re popular. He knew exactly what I meant.

In my presentation that year, I showed a chart of uranium and called it a bubble. I was roundly booed. I responded to the boos by making an observation. I told the crowd how ironic it was that this group of supposedly sophisticated and “contrarian” investors could have looked at the 2000-era bubble in Nasdaq stocks and seen the obvious bubble… But looking at a nearly identical bubble in uranium, they saw nothing.

It is particularly ironic because at least some of the Nasdaq stocks were high-margin, high-growth companies destined to be very successful, while the uranium bubble was made up of nothing but low-margin, highly leveraged commodity producers – none of which were destined for success. The uranium bubble burst, of course. And I wasn’t invited back the next year… of course.

If you’ve read all four of my essays this week, I hope you’ve learned something valuable and helpful. There is a golden thread you’ll find running through all of these messages…

If you can learn to stick with investing in good businesses trading at reasonable prices, you will greatly increase your investment results. That’s true whether it’s a bear market or a bull market. Learning this discipline requires as much emotional control as it does mental prowess. And that’s the hard part. That’s the part I can’t teach. That’s the part you’ll have to learn on your own. And sadly, you will almost surely learn it the hard way. I wish you luck. And I pray your tuition doesn’t cost too much.