By almost any measure, Netflix, the Internet television “network” that has changed the nature of the industry, is all the rage.

[ad#Google Adsense 336×280-IA]The Netflix story is a work in progress, but I see its most recent results as another chapter on the way to even more profitable opportunities going forward.

Indeed, in a moment you’ll see how we can ring up a 280% profit in the Netflix “after-party.”

NFLX’s “Bump and Run” Setup Is Perfect for Profits 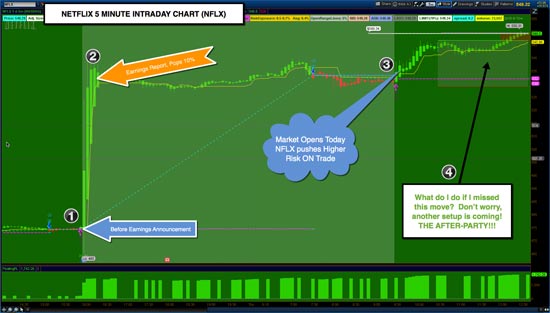 The bump and run is a series of occurrences that can happen during the week of earnings announcements regarding popular stocks.

During the week of April 13 when Netflix announced earnings, there were at least three opportunities to get into NFLX stock – and make money – if you knew where to look.

That ship has sailed… but we don’t want miss the next opportunity, which is coming up fast. Let’s take a minute to go through them all, and I’ll show you what I will be doing in this final chapter of the Netflix “bump and run!”

The “Preshow” Sets the Stage…

Typically, a day or two before an earnings release, stocks will tend to gyrate in a tight range. This is much like a runner that is stretching, and getting his or her feet planted firmly into the blocks before the starting gun goes off.

This is exactly what happened to NFLX stock.

So the question is: Which way is NFLX likely to go? For many it might have been up, due to all the hype about a great quarter or on news of the latest in the pipeline of TV series produced by Netflix.

Or perhaps it is simply the 300 million users outside of the United States that could become potential subscribers. Nonetheless, the question on smart traders’ minds is simple: How far is this stock going to move after earnings?

One way to answer this question is to look back at how NFLX stock behaved before and after earnings were released in the past.

The table above tells me that over the last four earnings cycles, NFLX has averaged a gain of 9.29%, or in this case about 45 points, from the stock price before earnings. Let’s hold on to this number for a moment.

Here’s the next question – is there a way to help predict a future earnings price movement?

Options Prove to Be the Predictor

A smart options trader doesn’t know if the stock is going to go higher or lower after an earnings report, but has a very good idea of how far a move in either direction it is likely to go.

That’s because he looks at the short-term, near-the-money options as a predictor of future price movement.

Consider these prices at the close of April 14, 2015, before earnings came out:

Option traders will take the short-term prices of the at-the-money calls and puts and add them together to get an idea of where a stock is likely to gap – that is, move sharply – after the earnings are released.

So looking at the “Predictor,” traders expected NFLX to open roughly 50 points higher or lower the day following earnings. So where did NFLX open after earnings? 532, or 54 points higher… not a bad predictor.

Now let’s put these puzzle pieces together: we know that NFLX had a predictive pattern to head higher, had done so in the past by over 9%, and the options told us going forward that traders were expecting a better than 10% move on this coming earnings report.

All in all, not a bad head start on an options play…

Here’s How We Get in on the Next Big Move

If you missed this, that’s okay, because you have just been invited to the after party!

What’s the after party?

It’s the part where uncertainty is now behind us and we are now looking for momentum to carry NFLX stock to continued highs. So how do I know the after party will take this stock higher?

Well, it’s not the possibility of a stock split or analysts turning bullish on NFLX.

It’s what the stock did the day after earnings that has me excited. It followed through on the monstrous 18% move on April 15 with another move to the upside on April 16.

So that has me with a 30-day target on the stock at $600, or roughly another 6% move higher than where we are today.

How can we take an after party position with the least amount of risk?

Here’s a clue, it isn’t with the stock.

My mentor always asked this question when evaluating any position… “What if I am wrong?” The stock will cost me over $56,000 to own 100 shares, and to the short-term trader, that’s a bit rich for most people.

Options provide us the ability to take a shorter-term position than is possible by holding the stock, while having much less out-of-pocket cost and risk.

Let’s take a look at the call options on NFLX:

A call spread is designed to force down the cost and risk of the trade by selling a higher strike call to someone else. You look to profit between the spreads.

More specifically, what we are doing is referred to as a bull call spread, meaning we are bullish, and we are creating a spread to profit from it, all at a lower cost, lower risk, and a higher return on investment at our target price of $600.

By keeping the same position above, but selling the NFLX 600 calls (our target) and collecting premium from them, we reduce our cost by over 75%, to less than $300 per contract.

Using the power of our options play, we can reap as much as a 280% profit on significantly lower out-of-pocket cost compared with owing the stock.

Welcome to the after party!