We must be idiots…

[ad#Google Adsense 336×280-IA]”Higher interest rates are just around the corner,” they tell us today.

The thing is, they’ve told us that over and over – since the Fed first cut interest rates to zero back in 2008.

The Fed has cried wolf, for more than six years.

And we’re still panicking, looking for the wolf…

To show you what I mean, we’ve put together a simple table.

This table shows the market’s expectations of how long it will take for the Federal Reserve to raise interest rates.

The message from this table is, an interest rate hike is always “just around the corner”: 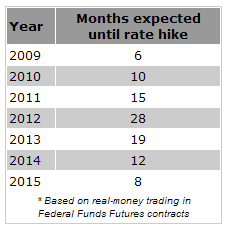 Earlier this year, it was nearly unanimous – the Fed was going to raise interest rates in June 2015. Then it slowly shifted… the consensus opinion was that the Fed would raise rates in September 2015.

Now, according to a Bloomberg article last week, “Traders Are Now Expecting the Fed to Raise Rates Later Than Ever Before.”

The subhead says, “Market expectations are for no rate increases from the Federal Reserve before the last week of November.”

I suggest you ignore the Fed. I suggest you stick with my investing “script” – which my subscribers have been following for at least five years:

If you had stuck with that script and listened to nothing else, you’d be very wealthy today.

Has the script changed?

If you listened to the Fed – if you worried that higher interest rates are just around the corner – then you might have panicked at some point and sold.

Don’t listen to the Fed. The Fed has cried wolf for more than six years. There is no wolf.

Instead, stick to our script. It has served us well for years.

It has made us a lot of money. And it will continue to do so… as I believe that stocks and real estate have not soared higher than you can imagine yet…