A revolution has started within automobile manufacturing and new players from Silicon Valley are intent on becoming bigger players in this enormous global market. Google (NASDAQ: GOOGL) is developing a driverless car.

Tesla Motors (NASDAQ: TSLA) has come out of nowhere to sport a market capitalization north of $20 billion even as it is still producing just 10,000 vehicles a quarter and its Model S has won car of the year and other accolades.

[ad#Google Adsense 336×280-IA]Even mighty Apple (NASDAQ: AAPL) is rumored to be getting into the electric car business although I think it is more likely they take a stake or partner with an existing electric car manufacturer at some point.

This revolution is at its infancy.

Electronics have gone from mostly an afterthought or secondary factor in building a new car to a major component.

In some luxury cars, electronics and software are already accounting for 10% to 25% of the overall cost of components to build a vehicle.

This percentage will only grow as we enter a new era of car manufacturing.

The growing technology component within the automobile market is unlikely to move the needle for giants like Google and Apple but could become major contributors to revenue and earnings growth within some smaller firms. Here are a couple of companies with attractive values that could be long term beneficiaries of this multi-year trend. 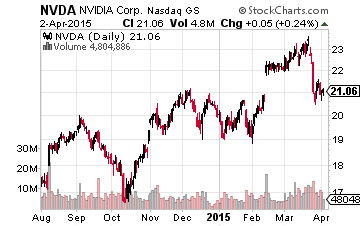 Let’s start with Nvidia (NASDAQ: NVDA), a company known as a commodity chip producer as well as for its leading line of graphics chips.

The company is moving into the automotive market in a big way.

In its latest completed quarter, revenue from the sector grew 85% year-over-year to $183 million.

The firm believes that its software will win other vehicle manufacturers as well. One of the company’s automobile platforms, Drive PX, is focused on machine learning and can merge data streaming from 12 cameras simultaneously. The firm has sold units for digital cockpits and infotainment systems in eight million vehicles and expects to ship 25 million more in the next three to four years.

Automotive sales pale in comparison to the $2 billion in revenue the company gets from gaming annually. However, revenues from the auto sector are growing faster than any other segment the company serves and compose almost 5% of overall sales. Going forward, they should make up at least double that in the next couple of years. Gaming sales are still growing rapidly and the much smaller high performance and cloud computing segment is also seeing recent 50% growth.

These three segments are key to Nvidia’s long term growth plans and all are growing faster than the company as a whole. Nvidia grew its revenue by 13% year-over-year to $4.7 billion during its last completed quarter. Earnings per share grew 51% to $1.12. The stock pays a 1.6% dividend and has been buying back stock heavily as well. 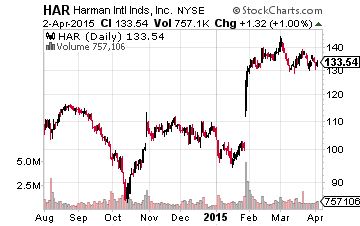 It is the market share leader in the car entertainment space offering stereo systems and other components.

The company is also a big player in car navigation systems.

Entertainment and navigation systems make up about 50% of overall revenues.

The company and its stock have benefited greatly over the past couple of years as the domestic automobile market has come back to pre-crisis levels. The shares have more than quintupled from their 2009 lows where it looked like some of the domestic auto manufacturers would go bankrupt.

Harman is not resting on its laurels. The company made two separate acquisitions last year for a total of just under $1 billion. The purchases provided Harman with auto software-services and over-the-air upgrade capabilities. Given the company’s long standing relationships with almost every global auto manufacturer, it should be able to quickly expand sales and integrate these new services into its overall offerings providing a nice boost to growth.

In a market currently struggling to achieve any sort of organic earnings or revenue growth, Harman is seeing global sales grow annually in the low teens. The company posted earnings of approximately $4.40 a share in FY2014 and is tracking to a profit of better than $5.75 a share in FY2015 (which ends June 30th). The consensus has Harman earning $7.00 a share in FY2016.

Harman is trading at a slight premium to the overall market at 19x forward expected earnings. However, given its superior growth trajectory the stock is worth accumulating in any overall dip in the market.