Gold stocks have gone nowhere for the past eight weeks. But that’s about to change…

When we last looked at gold stocks in October, I said the benchmark Market Vectors Gold Miners Fund (GDX) may need to consolidate for a few weeks before attempting a new rally.

That’s exactly what has been happening. GDX has been trading back and forth in a tight range – storing up energy for its next big move. And the move is about to start…

Take a look at this chart of GDX… 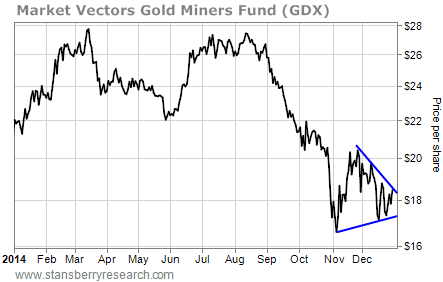 [ad#Google Adsense 336×280-IA]The support and resistance lines are now pinching together and GDX is nearing the apex of the triangle.

So we’re going to see GDX break out of this pattern – one way or another – soon.

So if GDX breaks above the resistance line of the triangle (currently at about $18.60 per share), we’ll have a new rally phase with a target of about $22.10 per share.

That’s also the point of the October high, which is a logical area for GDX to run into resistance.

On the other hand, if GDX breaks below the support line of the triangle – at about $17.20 per share – we’ll be looking at another wicked selloff in the gold sector. The pattern suggests a downside target of $13.70 per share.

There’s no way to know ahead of time which way GDX will break. But traders should be ready to react either way.