It’s tough to find any value in the market right now.

After all, the S&P 500 index is up more than 86% over the last five years. And with the broader market, many individual stocks have increased in price rather substantially.

However, it’s always important to separate price from value.

It’s also important to remember that the stock market is a market full of stocks, meaning not all stocks are valued the same at all times.

[ad#Google Adsense 336×280-IA]So while many stocks have rocketed up over the last five years, not all have.

Furthermore, some were substantially undervalued at the beginning of the period, meaning they were due to be correctly priced by the market at some point anyhow.

But how do we know when stocks are correctly priced?

Well, learning how to value stocks is imperative.

It’s not a simple process, but an informational guide on this was published by David Van Knapp, which can help on this front.

Valuing stocks is a lot like valuing anything else in life. You can go down to your local grocery store and you’ll be valuating everything intuitively and subconsciously. If a can of soup is $1.00, you’ll know that’s a good deal. If that same can is $7.50 instead, you’ll know it’s probably too expensive.

But stocks are a little easier to value because they’re pieces of ownership in real business that produce real cash flow. This cash flow can be used to value stocks within a reasonable range.

I’ve independently valued every single stock in my personal portfolio before investing, making sure that I was paying a fair or better price before letting my hard-earned cash go.

And I’m usually scanning through David Fish’s Dividend Champions, Contenders, and Challengers document for potential additions to my portfolio, as this list features almost 600 US-listed stocks that have increased their respective dividends for at least the last five consecutive years. So there’s plenty of potential opportunities there.

Performing one of these recent scans revealed a stock that appears to be priced potentially significantly below its fair value.

Want to know which one?

Read and find out!

Occidental perhaps isn’t as well-known as many other global energy companies, but OXY does sport a market cap north of $60 billion. So it’s obviously established.

Another thing that’s established is OXY’s dividend growth record, as the company has increased its dividend for the past 12 consecutive years.

And they’re not just increasing the dividend, but doing so at a generous rate – it’s grown by an annual rate of 16.8% over the last ten years.

What’s also impressive is the stock’s yield, at 3.57% right now.

And that fairly hefty dividend is well-covered by earnings.

The payout ratio is just 40% right now, which leaves plenty of room for future dividend raises.

The dividend metrics are pretty solid across the board. Great yield, low payout ratio, and a pretty high growth rate.

But let’s figure out how much the core business is growing, which will help us with valuing the business.

Earnings per share tells us the kind of profit the company is taking in on a per-share basis. This really gets to the heart of the company’s health and growth. EPS increased from $3.20 to $7.32 during this period, which is a CAGR of 9.63%. Not much to complain about here. A growth rate near double digits always makes me happy.

S&P Capital IQ is anticipating that EPS will contract at a compound annual rate of -3% over the next three years. OXY, like other major oil companies, could face difficulties in the near term with falling oil prices, though the long-term prospects and economics still look rather attractive.

One other really appealing part of this business is its balance sheet. The long-term debt/equity ratio is 0.16, which means long-term debt is somewhat negligible for the company.

I typically find that high-quality companies display great growth, responsible leverage, excellent profitability, and a penchant for rewarding shareholders with a share of profits via increasing dividends over a long period of time. And Occidental seems to check these boxes off here. Furthermore, their global exposure to the oil and gas industry puts them in a great position to continue profiting from the world’s increasing need and thirst for energy over the long term.

However, while OXY seems to be high in quality, it’s not worth paying any price for, especially if that price is substantially above what shares are really worth.

But what is OXY worth?

Well, shares are trading hands for a P/E ratio of 11.16 right now, which not only compares very favorably to the broader market, but also to its own five-year average price-to-earnings ratio of 13.3.

So shares appear to be offered at a discount. But what is the price we should actually pay? Let’s put a price to shares here.

So my analysis concludes that OXY is a pretty great deal right now, especially considering that such deals are few and far between right now. However, let’s compare my result with some professionals that track this stock to arrive at some kind of consensus.

Morningstar rates OXY as a 4-star stock, with a fair value estimate of $99.00.

It seems that I’m definitely not alone with my conclusion here. OXY could very well be one of the better values available on the market right now. If you average out the three numbers, you get a fair value of $96.57. That would indicate that this stock is potentially 20% undervalued right now. 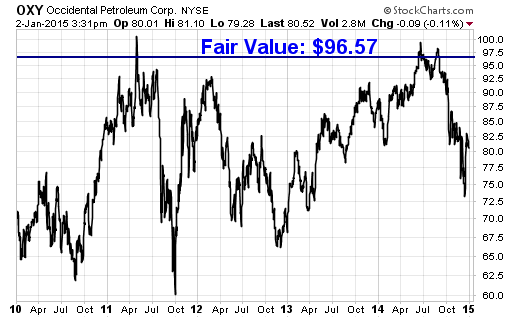 Bottom line: Occidental Petroleum Corporation (OXY) is a global player in the oil and gas industry. The price of oil has been weak lately, which has affected OXY’s stock price negatively. However, the long-term fundamentals appear excellent, and this company is growing at a healthy clip. Moreover, they’ve been sharing increasing profits with shareholders for over a decade, and at a rather generous rate. Shares appear possibly 20% undervalued here, which could be a fantastic opportunity for the enterprising investor.