Yet another Greek tragedy is playing out in economically distressed southern Europe.

So citizens will head to the polls again, this time 18 months ahead of schedule.

With the “extreme left” party currently in the lead, there’s more than political posturing at stake.

[ad#Google Adsense 336×280-IA]Volatility is sure to rise, and the pressure on ECB President Mario Draghi to “do something” will grow stronger than ever.

It feels like “déjà-vu all over again” as Europe continues to try and find ways to remain unified.

While the squabbling continues, we’ve found the best way of creating investment opportunities…

On Monday, Dec. 29, 2014, Greece’s prime minister announced on live TV that parliament would be dissolved and elections held on Jan. 25.

That caused Greek 10-year yields to jump 1.3% (to 9.5% yields) and the benchmark stock index to swoon 11% intraday as the market digested this news. The euro dropped to 1.215 against the U.S. dollar, its lowest levels since the depths of the mid-2012 European sovereign debt crisis.

Jitters are being felt across the European Union as the political uncertainty is seeping into already grim economic expectations.

After all, the 2012 Greek debt exchange was the largest debt restructuring in the history of sovereign defaults.

And since the 2008-2009 financial crisis, Greece, it seems, has stumbled from one economic repair patch to the next, and it’s not hard to figure out why.

Thanks to outlandish promises, the poll-leading “hard-left” Syriza party could well form the next government.

Why Tsipras hasn’t promised everyone a free luxury vacation home on Santorini, I’m not entirely sure…

Greece has been here many times before, most notably after years of falling purchasing power due to World War II and a civil war from 1945-1949. That reversed during the “Greek economic miracle” between 1950 and 1973.

Greece’s economy enjoyed average annual growth of 7% during those years, with rates surpassing 10% during the 1950s. A large contributor to this “miracle” was a dramatic devaluation of its currency, the drachma.

Purchasing power and wages took a big hit, but that drastically discouraged suddenly much- pricier imports and encouraged local substitutions, and exports soared as their costs to foreigners plummeted. The economy adjusted, then quickly recovered as it was once again allowed to regain competitiveness.

Obviously, Syriza is overpromising good economic times and Greece remaining within the Euro currency union. But if they win, they’re likely to underdeliver, as they haven’t explained exactly how they’ll achieve the new “Greek economic miracle.” 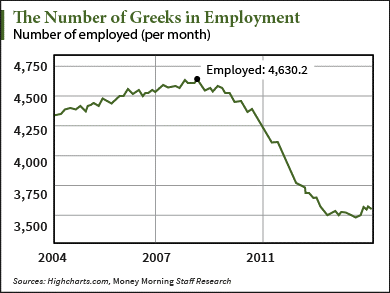 The truth is that surely they can’t deliver as promised.

Here’s why the “Greekovery” simply hasn’t happened so far…

Compared to its Eurozone compatriots, Greek GDP kept falling as others recovered, and it’s still strikingly below even the next worst performers, Cyprus and Italy.

After six years, astoundingly the economy is still only 75% of its former 2008 size. 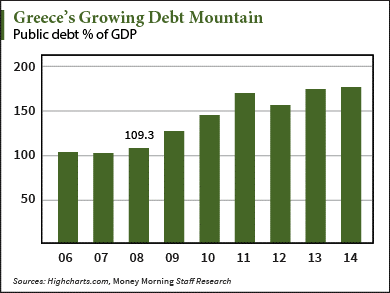 And the primary reason Greece remains mired in stagnation: a crushing debt load.

The country owes a gargantuan 314 billion euros, representing 175% of the nation’s GDP.

Inevitably, a weak-debt economy has exacerbated the debt-to-GDP ratio and quashed nearly all hope for a recovery.

Quite simply, there’s too much at stake for Greece’s largest creditors, German and French banks, to let their leaders cave to Greek demands to stop paying, because, barring bailouts, they’d become overnight bankrupts.

With Greece trapped in a monetary union and the inability to devalue its currency, its limited options have been to cut government spending and slash wages.

As the market sensed a new president wouldn’t be elected, the Athens stock exchange lost nearly 30% in the last three weeks of December.

Goldman Sachs warned that if parliament failed to elect a president, leading to a “severe Greek government clash with international lenders, interruption of liquidity provision to Greek banks by the ECB could potentially even lead to a Cyprus-style prolonged ‘bank holiday.’ And market fears for potential Euro-exit risks could rise at that point.”

For investors, the best option now is to simply wait out the volatility.

As I outlined recently, Eurozone conflicts will bring about a major opportunity and our chance to profit from the turmoil.

Once Draghi finally gets his way, QE will eventually arrive in Europe. When it does, that will be your signal to go long the continent.

Consider Wisdom Tree Europe Hedged Equity ETF (NYSE Arca: HEDJ) as a favored investment vehicle that provides returns on a basket of some of the largest and most liquid European stocks, while hedging the dollar/euro exchange risks.

Remember, Greece is worthy of watching as a signal on Europe. The fragile Union harbors a number of problems, any one of which can lead to sparks.

Those will bring serious dislocations on the continent and beyond. I’ll keep you readily informed on the emerging threats and opportunities in 2015.