On Wednesday and Thursday of last week, that’s exactly what happened… The Dow index soared by 275 points on Wednesday, and then fell by 335 points on Thursday.

Those moves sound impressive… And it is true that the biggest up and down moves often happen at turning points in the market.

So are we looking at a turning point today?

I don’t think so.

[ad#Google Adsense 336×280-IA]While last week was more “exciting” in the markets than we’ve seen in a while… in the big picture, it wasn’t THAT exciting…

The financial crisis in late 2008 – now THAT brought some excitement. Last week? Not so much.

For proof, take a look at this chart of the Volatility Index (the “VIX”).

You can see that the stock market has been downright placid for the last two years… Compared with late 2008, we ain’t seen nothin’ yet. See for yourself: 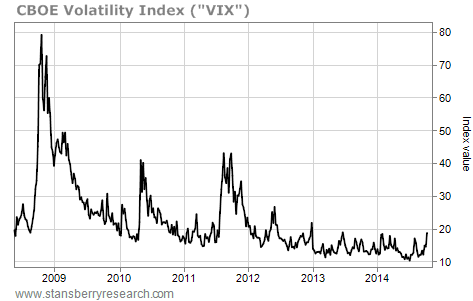 The things that pushed the market higher are still in place.

The market wobbled last week, for sure. But wobbles are part of the stock market. It goes up, and it goes down. Instead of worrying about the day-to-day wobbles, you need to have a longer-term “script.”

I laid out a script for us a couple weeks ago, in a DailyWealth called “Your Investment Script as Interest Rates Rise.”

For years, we’ve owned stocks without wavering, on the idea that zero-percent interest rates would push stock prices and real estate prices higher than anyone could imagine.

Now, we’re coming upon the first interest-rate hike since 2006. What will happen? Will that be the end of the stock market boom?

We looked at history, and we found that stocks actually rise going into the first interest-rate hike. Then after the first hike, they have a small correction – for an average of 7 percent. After that, they keep running higher. So that’s our working script.

There are no guarantees that the stock market will follow the script this time around. But that’s what history tells us… and that’s what we’re going with.

It appears that the date of the first interest-rate hike keeps getting pushed farther into the future, as the world economy continues to struggle. I think this will just allow stock prices a chance to move even higher.

People have nowhere to put their money in our zero-percent world… Where can they put it?

In my opinion, money will flow into stocks (and real estate) – pushing stock prices significantly higher between now and the first interest rate hike sometime in 2015. Then stocks will have a correction after the rate hike, before heading higher again. That’s our story.

So I am not too worried about the volatility we saw last week. It wasn’t that exciting, in the grand scheme of things. And when you focus on the bigger picture, there’s still plenty of upside ahead…