Yesterday, I explained how most investors are underestimating coal’s dominant position in the global energy complex. In short, coal isn’t going anywhere…

Despite the nearly universal negative outlook people have for it, and growing regulatory pressure in the U.S., coal remains the world’s leading energy source.

[ad#Google Adsense 336×280-IA]And thanks to emerging markets – most notably India and China – its consumption continues to grow by about 2% annually.

But while environmentalism is no threat to coal’s place in the global energy complex… cheap natural gas has been devastating.

Today, I’ll explain how rising natural gas prices are making coal look more and more attractive… and how close we are to the “magic number” for the next coal rally.

Exactly two years ago, the June 2012 Investment Advisory focused on the rivalry between natural gas and coal.

We pointed out that thanks to drilling innovations like hydraulic fracturing (fracking) and horizontal drilling, the U.S. was suddenly drowning in natural gas. Since many power plants can run on either natural gas or coal, cheap natural gas is bad news for steam-coal producers.

“King coal’s dominant position as the fuel for electric generation has never been more threatened,” we wrote at the time. Coal companies would suffer if the shale-gas boom could keep natural gas prices at less than $4 per mmBtu. And that’s what has happened. In recent years, coal stocks have collapsed in the face of cheap gas.

But what investors today are missing is that natural resources are inherently cyclical. As the market abandons a natural resource for dead, prices drop to reflect lowered demand. Production follows. But low prices eventually attract more demand… causing prices and production to boom again.

So far, natural gas has spent all of 2014 at more than $4 per mmBtu. Rising natural gas prices are making coal look more attractive today.

Natural gas prices surged to $6 per mmBtu in February after the harsh winter. They’re now a little more than $4 per mmBtu. Coal prices – after adjusting for lower power-plant efficiency and higher transportation prices – are right around that same level.

The magic number for the next coal rally could be a natural gas price of more than $5 per mmBtu.

That’s the level that will drive a “significant” return to coal from natural gas, according to a recent Bank of America Merrill Lynch report. As natural gas prices climb and stay above $5 per mmBtu, we’ll see coal-fired power plants come back online.

And the tipping point may be even lower than $5…

“Natural gas prices approaching $4.50/mmBtu are making even the least-competitive Appalachia coal basins viable in some cases,” the Bloomberg financial news service recently reported. “In addition, the gap between coal prices expressed in mmBtu in the Powder River… and Illinois basins and gas has widened since [the fourth quarter], ensuring greater certainty in demand in those regions.”

Why do we think there’s a decent chance for an increase in gas prices?

Right now, no global market for natural gas prices exists. Natural gas costs more than $16 per mmBtu in parts of Asia and $11 in Europe. It’s no surprise that the world is clamoring to get its hands on the U.S.’s abundant and cheap natural gas reserves.

Looking at the facts of the global market for coal and its key role in electricity production globally, we agree with T. Boone Pickens and commodity investing expert Rick Rule, who told the audience at our Dallas conference last month that coal is a “when” investment – not an “if” investment.

In short: We know that the price of coal will eventually rise substantially.

In some regions, mining coal costs a lot more than the current price. So miners will either stop production or go out of business. As a result, sooner or later, stockpiles will dwindle, supplies will disappear, and prices will soar as shortages “suddenly” cause the market to panic.

We’re not at the panic point yet. But investors have obviously abandoned coal. That’s fantastic for us.

The chart below shows the Dow Jones U.S. Coal Index – a basket of domestic coal-producing stocks. The last time extreme pessimism ruled the day, investors brave enough to step in and buy could have ridden the rebound for a stunning 1,200% gain from 2000 to 2008. (Keep in mind, we’re not predicting four-digit gains. We simply want to show how dramatic the cyclical swings can be.) 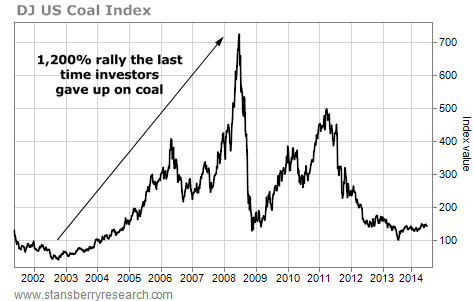 And back in 2000, as now, every elected official seemed to be on an anti-coal soapbox. The utilities scrambled to settle billion-dollar government lawsuits on Clean Air Act claims.

Today, the government has been increasing regulations faster than at any time in history. When it’s not pressuring the miners, it’s focused on the coal users. And yet… even as coal prices fell and mining companies failed… the U.S. produced 1.1 billion tons of coal in 2013.

While the industry faces some headwinds, we feel the coal markets could be forming a bottom. And as we learned in the years following the last coal crash… with nearly 40% of the country’s power grid tied to coal, share prices beaten down by regulatory backlash are not going to permanently cripple the coal markets.