“We Have Seen the Bottom!” gold expert John Doody “shouted” in his Gold Stock Analyst newsletter on July 1.

Gold stocks rose over the next few months, before falling back near their June lows. But all of a sudden, gold stocks are on the move again. John’s July call looks like it might be right after all.

John has been writing about gold stocks for more than three decades. He’s one of the smartest analysts in the industry.

Over the last 12 years, his gold-stock recommendations have resulted in 1,200%-plus gains (based on his audited track record).

One of my favorite features of John’s letter is his way of tracking whether gold stocks are cheap or expensive relative to the price of gold.

It has proven to be incredibly accurate.

When gold stocks are cheap according to his measure, you want to buy.

Lately, gold stocks have been undervalued by 40%-plus. Based on history, we’ve only seen prices this cheap one other time – at the market bottom in 2008.

Buying then would have led to 126% gains in six months.

In fact, any time John’s measure got below 25% undervalued would’ve been a great time to buy. Take a look… 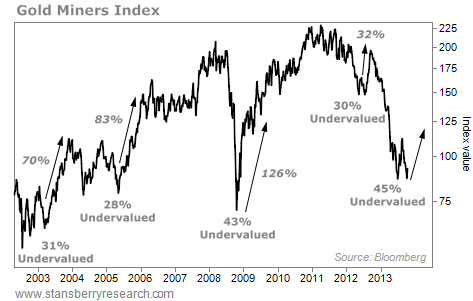 As the chart shows, big gains followed the last few times gold stocks got anywhere near this cheap. And remember, the only time they were really close to today’s value – in 2008 – shares of the Market Vector Gold Miners Fund (GDX) soared 126% in six months.

I believe we’re on the verge of a similar move right now. GDX is up as much as 12% over the last two weeks. Like John, I believe we’ve likely seen the bottom for gold stocks… And this could be the beginning of a major leg higher.

We have an opportunity for a great trade here… with limited downside risk (14%) and triple-digit upside potential.

To make this trade, you could buy the Market Vectors Gold Miners Fund and set a hard stop at the fund’s recent low of $22.22.

If shares fall below that level, sell the next day. You’ll have given up 14% on the downside.

If I’m right, and history repeats, you have triple-digit upside potential… possibly in as little as six months.