That may be hard to believe. After all, the precious metal is down 30% this year.

[ad#Google Adsense 336×280-IA]That’s hardly the sort of action big bull markets are made of.

But silver has rallied 20% off its late-June bottom.

The chart now has a series of higher lows in place. And the price just climbed back above its 50-day moving average (DMA).

The last time silver put all three of these actions together was in December 2008. 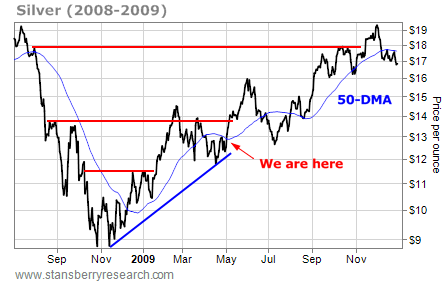 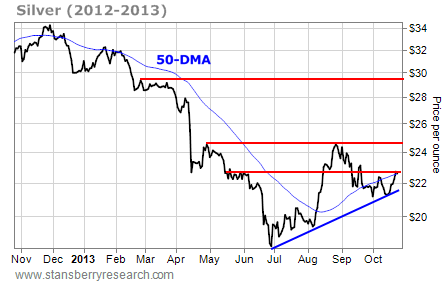 Note the similarities. In both cases, silver entered a steep downtrend when it fell below its 50-DMA. The metal lost almost 50% of its value in 2008. It suffered a similar loss from late 2012 until June 2013.

The metal bounced around the bottom for a few weeks in 2008 before exploding higher and crossing back above its 50-DMA. It followed the same routine this year.

Finally, in 2008, silver dropped back below its 50-DMA but held above the support line connecting its series of higher lows. That set the stage for another rally above the 50-DMA and toward the resistance lines (red on the chart). Ultimately, silver broke above all the resistance lines as it went on to peak at nearly $50 per ounce in April 2011.

Today, the chart looks very much the same as it did in late-2008/early 2009. A move above $23 per ounce should spark a rally to the next resistance line just below $25. If silver can get above $25 per ounce, there’s not much resistance until almost $30.

If this is the start of a new bull market for silver – and I think it is – the metal may be starting a new long-term uptrend that could last for the next couple years.

Traders who didn’t buy silver when we wrote about it last month should use any pullbacks toward the rising blue support line as a chance to get onboard.