Last month, I showed you concrete evidence that the U.S. economy is slowly getting better.

If you’re not aware of this evidence, or simply deny that it exists, you could miss out on huge investment opportunities over the coming years.

Today, I’m going to show you more evidence… and remind you why it’s so important.

But listening to all that will lead you into poorly performing investments.

You see, the facts show a different story…

But many people remain anxious that the ending of the Bush-era tax cuts and the automatic reductions in government spending will drive the market off a cliff.

The market will be fine… and here’s why…

The Federal Reserve of Philadelphia publishes a chart called the “Leading Index.” It combines data on things like housing permits, unemployment insurance claims, interest-rate spreads, and manufacturing surveys in an attempt to predict where the economy is headed.

When the index is above “0” and trending up, it presages growth. When the line falls and approaches “0” (or lower), the economy is slowing. Usually when a downtrending line crosses about 0.8… we’re headed for a recession.

As you can see in the following chart… Since the middle of 2009, it’s flirted with crossing the “0.8” recession-signaling threshold. But each time, we’ve bounced back. For now, it’s consistent with a slow-grinding economy. We’ll watch this closely for signs of deterioration. 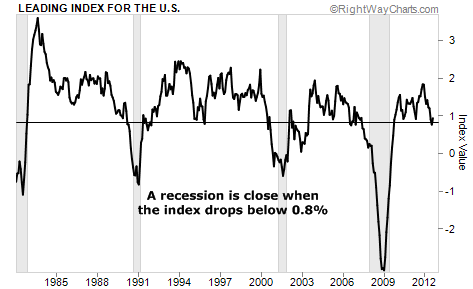 I also like to track activity in the service sector – which is almost two-thirds of the U.S. economy. The service sector consists of things like shipping, waste disposal, health care, and financial services.

The Institute of Supply Management trade association compiles a figure called “non-manufacturing business activity.” When the number is above 50%, it indicates the service sector is expanding. As you can see from the graph, the latest point is almost at 60%, with sharp increases over the past several months. 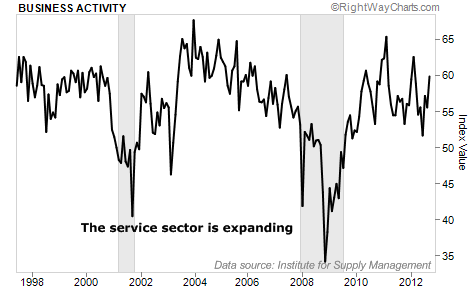 For pundits predicting that the U.S. economy is heading for a big leg down… this is a surprise. At best, it suggests things (jobs, income, etc.) will keep improving over the next several months. At worst, it was just a summer spike driven by travelers – foreign and domestic – and will slow down this winter.

Similarly, the other part of the economy – manufacturing – has seen new orders increasing (when the number is above 50%) after having dropped below that level over the summer. The slowdown in China and South America is likely holding down this number. But I look for it to remain steady through the fall, as Europe recovers and America’s economy chugs along. 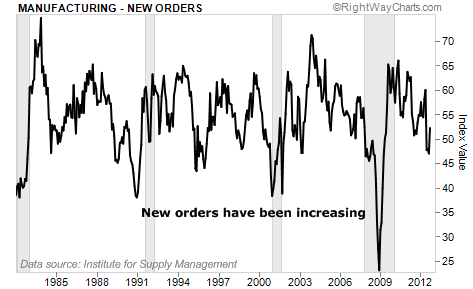 This is all consistent with an economy that’s chugging along in low gear.

As I said in October, it’s possible that things will change. The government’s bungling will likely cause big problems down the road. But the bottom line for you as an investor or retiree is that we have little to worry about right now.

So the right thing to do is stay invested in blue-chip, dividend-paying businesses like Microsoft (MSFT) and Chevron (CVX). I remain against the conventional “doom and gloom” by saying tax-free municipal bonds are still worth holding. And I like owning real estate assets in various forms.

Sure, things can change. We’ll keep a watchful eye out for signs of it. But right now, the facts tell us that things in the U.S. are much better than the pessimists would have you believe. That’s why it’s still a good idea to be invested in America.