The metal had fallen nearly 30% over the previous five months. It was nearly as hated as it had ever been…

That’s what got me interested. Based on history, buying silver when investors give up, like they did in early August, is a great idea. The last four times investors gave up, silver rose an average 20% in three months.

If you stepped in and bought in August, you’re up 25% in less than seven weeks.

And investors are excited about silver again.

So what should you do now?

Back in August, futures traders speculating on silver were near all-time “short” levels.

As a rule, when futures traders all think the same thing, the market tends to do the opposite.

But today, silver isn’t the contrarian trade. Silver futures traders are nearing an extreme in bullishness. Take a look… 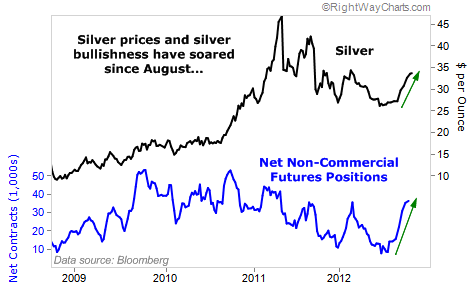 As you can see, silver traders have completely reversed their bets in the last two months. Now, traders are nearing a bullish extreme. But that doesn’t mean it’s time to sell silver…

Take another look at the chart…

I believe that’s exactly what will happen today. Here’s why…

In 2010, the market was expecting “money printing” from the Federal Reserve. Silver hit a bullish sentiment extreme and continued rising.

We’re in a similar situation today. Last week, the Federal Reserve announced the next round of so called “quantitative easing.” Silver sentiment soared. But I believe there’s much more room for silver to move higher.

We’ve already seen the 20% gains we expected in three months. But the negative sentiment extremes tend to kick off new bull markets in silver. Based on history, these new silver bull markets return 91% in just nine months. So even after a quick 25% move, silver still has 50%-plus upside from here.

If you’re already in this silver trade, I suggest sitting tight. But if you haven’t bought yet, you haven’t missed it.

Sure, silver could fall slightly from here. Or it could move sideways for a while.

But the long-term trend is up. And based on history, we want to own silver today.