Everyone is looking for ways to shelter their money from taxes.

And with the possibility of taxes on dividends increasing next year, investors are especially interested in protecting their income from Uncle Sam.

[ad#Google Adsense 336×280-IA]So, dividend investors may be looking to put some of their higher-yielding stocks in individual retirement accounts (IRA), which have certain tax advantages.

But there’s one particular type of high-yielding stock you should never put in your IRA – master limited partnerships (MLPs).

MLPs are similar to real estate investment trusts (REITs) in that the companies don’t pay corporate income tax as long as they distribute 90% of their profits to shareholders (called unitholders). 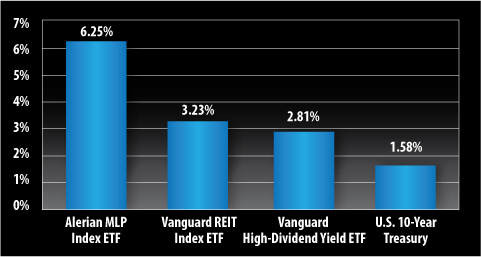 MLPs are popular with income-seekers because they usually have strong yields of 5% or more. However, investors already receive a tax break on MLPs, so there’s no reason to put one in an IRA.

Retirement Income as a Partner

When you invest in an MLP, you’re considered a partner, not a shareholder.

As a result, the payout you receive is a distribution from the partnership, not a stock dividend. Most – if not all – of that distribution is usually considered a return of capital.

Unless you’re a CPA, your eyes may be glazing over at this point. But prop up those eyelids with some toothpicks if you have to, because this is critical to understand if you’re going to take advantage of the high yields offered by MLPs.

Any payment that you collect – that is considered a return of capital – isn’t taxed in the year it was received. Instead, it lowers your cost basis.

Here’s what I mean:

Let’s say you buy an MLP for $20 and it pays a cash distribution of $1 this year. For the sake of this example, we’ll assume the entire $1 is classified as a return of capital.

You’d collect the $1, and when you figure out your taxes this year, that $1 wouldn’t be taxable income. However, your cost basis for the stock is no longer $20… It’s reduced by $1 to $19.

Next year, the same thing occurs. You pocket another $1 in cash and your cost basis is reduced to $18.

In Year 3, you sell your stock for $22 before you receive the $1 distribution. You’ll now pay taxes on a capital gain of $4 instead of $2, because your cost basis has been reduced by the $2 in cash distributions you’ve already received. 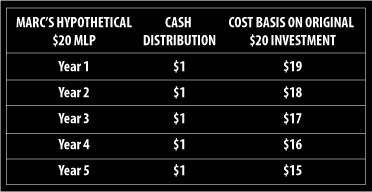 For a long-term income investor, this can be a great situation, as you can receive a considerable amount of tax-deferred income and simply pay the taxes when (or if) you sell.

Since an MLP is mostly tax deferred already, placing it in an IRA may take up space for another investment that can use the tax-deferred status, such as a dividend-paying stock.

You’re essentially wasting the space in the IRA with an investment that’s already tax deferred.

But there’s an even more important reason not to put an MLP in your IRA.

You may have to pay MORE taxes… And no one wants to do that.

Despite the partnership being placed in your IRA, you might actually have to pay taxes on it… Though, you won’t if it’s in a taxable account.

Without getting into the gory details, investors who have an MLP in an IRA are susceptible to the unrelated business taxable income (UBTI), if their distributions total $1,000 or more per year.

And that’s on top of the fact that the tax consequences of holding MLPs are already more complicated.

Investors receive a K-1 form rather than a 1099-DIV. If you own it in an IRA, the custodian, most likely the broker, may contact you to send your K-1 forms to him, as he’s responsible for reporting UBTI on behalf of IRA customers.

Keep in mind, that from a tax perspective, MLPs are more complex, and you should speak with your tax advisor before investing. But if you determine that MLPs are suitable for you, they’re an excellent way of collecting income today, while worrying about the tax man later.