Sellers would receive dozens of bids above the asking price. And prices skyrocketed around the country.

Things could be changing now, though. That’s because the slowdown in housing has reached a rare level. And it means the worst of the decline is likely behind us.

Skyrocketing mortgage rates are a recipe for a housing slump. Most folks still buy with a mortgage. And when mortgage rates soar, housing affordability drops.

Last year’s soaring rates led to a 35% to 40% rise in the typical monthly mortgage payment. (And that’s with home prices going nowhere.) So, of course, demand cratered.

However, the decline has hit a level where we’d expect a bottom.

You can see it in the Pending Home Sales (“PHS”) Index. The PHS comes from the National Association of Realtors, the industry’s premier data provider. The index looks at sales activity to determine trends in the market.

Importantly, the PHS is considered a leading indicator, often signaling where existing-home sales will go in the months that follow. And it has staged a huge decline recently. Take a look… 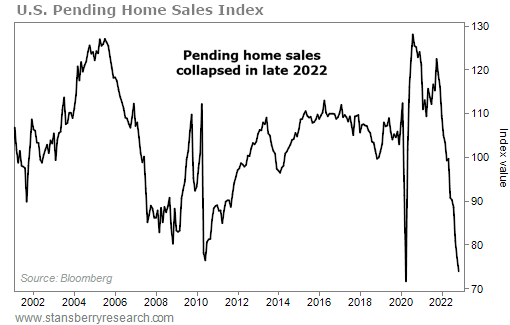 The most recent reading of 73.9 is the second lowest in history. Only the pandemic bottom’s reading was lower.

You might assume that’s a bad thing. But this is actually a strong contrarian indicator. We can see it throughout history…

That was a great time to put money to work in real estate… and so was the next major bottom in 2020. The housing rally that followed that pandemic low was one of the greatest on record.

Now, housing is slowing again. And the PHS is at its second-lowest level ever. That doesn’t mean the housing slump is over. But it does mean we’re getting close to that point.

The long-term fundamentals are in favor of higher home prices. We still need millions more homes than we have… And that supply-and-demand imbalance is a massive tailwind.

If mortgage rates fall, housing activity will likely pick back up in a hurry. And higher prices will surely follow. We’re nearing that point now.

Most folks still believe that housing has a lot of pain to come. But this indicator says the worst is behind us. So don’t get caught betting on a long-term bust… The smart bet is to be bullish on housing right now.