A 23% decline in a month completed oil’s round trip.

The commodity was trading around $75 per barrel before soaring to $120 in the first half of 2022. Then, oil fell… and fell some more.

From November 4 to December 9, oil fell 23% to its lowest level in more than a year. That’s a scary move to the downside. But it wasn’t the nail in the coffin for oil that you might think…

More often, quick drops like these can’t last. The sprint lower eventually ends. And when that happens, assets can come roaring back.

Since its bottom in December, the price of oil is up 15%. But the rally isn’t over yet.

This comeback is likely just getting underway. And one hot streak shows just how good it could get going forward…

Before we get into what this new momentum means, let’s quickly recap where oil was in December and why this rally was likely in the first place.

The indicator that was flashing in December needs little introduction. Regular DailyWealth readers know that overreactions in the market tend to snap back. And the relative strength index (“RSI”) is one way to measure when investors have gotten ahead of themselves.

That 23% decline heading into December was a classic overreaction in the oil space. Here’s what I wrote to my DailyWealth Trader subscribers then…

When the RSI drops below 30 then rises, it gives a buy signal from an “oversold” level. It tells us a falling stock’s sell-off is likely over. And we’re seeing that right now in oil… 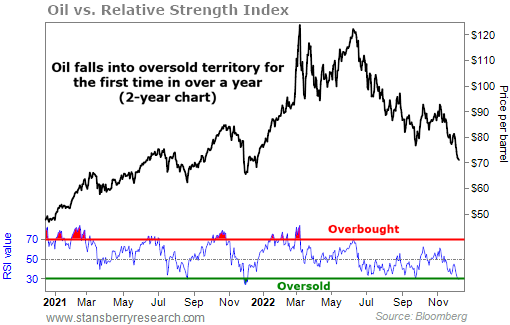 The last time we saw this happen was in November 2021… right before oil went on a seven-month rally of more than 75%.

We also saw a similar oversold signal in August 2021. Oil had fallen double digits in roughly two months. Then, it shot up 35% after the oversold signal and into October.

We even tested this data going back 32 years. And a typical six-month return following similar oversold levels led to a 6.4% rally in oil. The return gets even better when you go out a year, with oil up 8.7%.

Today, oil has already surpassed those returns. It’s up 15% in almost a month and a half. But again, this rally isn’t over.

You see, oil’s recent 15% run came during a hot streak. Oil rose eight days in a row at the beginning of January. Take a look… 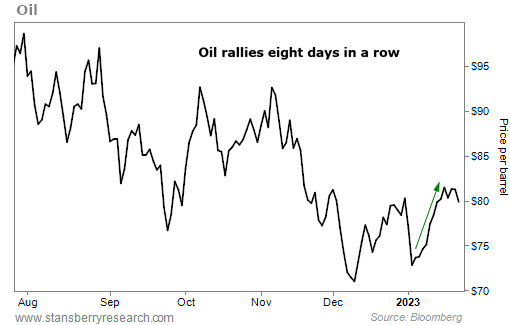 This kind of run is impressive. And by looking back 40 years, we can see that similar events have been a positive sign for the commodity over the next year.

Since 1980, buying after similar streaks has led to a winning trade 72% of the time. And history shows investors could have made nearly double-digit gains…

Oil has been rising slowly over the past 40 years… returning 2.5% per year. That’s nothing to write home about. But the numbers change following a hot streak…

Oil’s typical six-month return after an eight-day rally is 2.5%. And the one-year return is 9.9%. That crushes the typical annual move in oil.

So while we could see more volatility in the shorter term, history shows this commodity is set for a strong run over the next 12 months.