The bear market may not feel like a great time for investing. But here’s the thing: It actually is one of the best times to buy stocks. That’s because you can pick up stocks that may have been expensive in the past for a bargain. In many cases, we’re talking about market leaders and companies that have become household names.

Bear markets don’t last forever (thankfully). So, these solid players could rebound and thrive at any moment. That means right now is the time to get in on companies that have what it takes to lift your portfolio over the long term. Let’s check out five monster stocks to buy before 2023.

1. Amazon
Amazon (AMZN) has had a tough year. The e-commerce and cloud computing giant has reported quarter after quarter of declines in operating income. And free cash flow has even shifted to an outflow. That’s as higher inflation increased Amazon’s costs and weighed on the wallets of its customers.

Things don’t look great for the company right now. But the key words are “right now.” The long-term picture remains extremely bright. The e-commerce and cloud computing services markets are forecast to grow in the double digits this decade. Amazon, as a leader, should benefit. 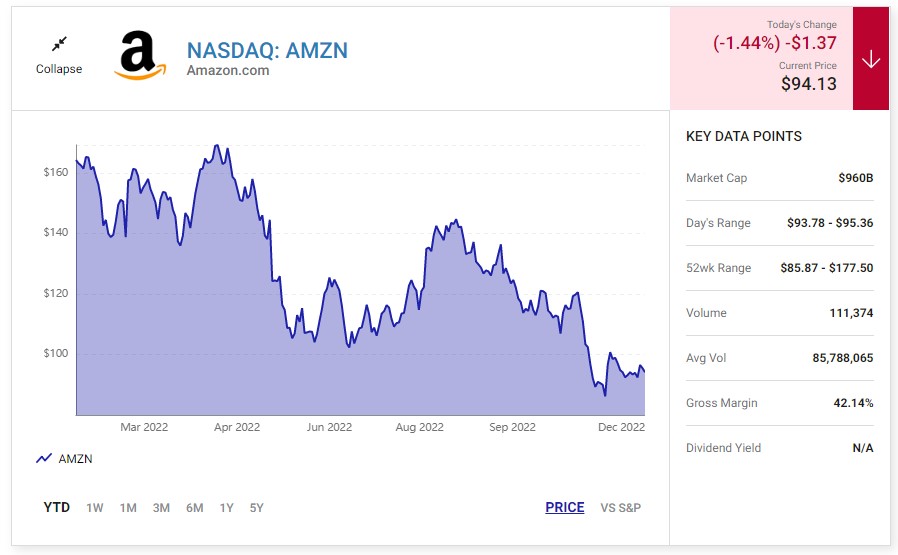 Also, today’s tough times have prompted the company to improve its cost structure. That will serve it well in the future. It has shifted its investments to favor its cloud computing business, Amazon Web Services. That business still is posting double-digit growth in operating income and revenue.

As for e-commerce, Amazon this fall reached record sign-ups for its U.S. Prime subscription service. That, too, is another great sign for the future.

Amazon trades for its cheapest in relation to sales since 2015. Through a long-term lens, the stock looks dirt cheap.

2. Disney
Disney (DIS) has reached a big turning point. The entertainment giant has reported growth in its parks, experiences, and products business. And it’s made great progress in signing on members to its streaming services — adding 57 million this year. But Disney is struggling with higher costs. And its shares have tumbled 36% this year.

But here’s the good news. Disney recently brought back longtime Chief Executive Officer Bob Iger. He’s the one responsible for successes like the purchases of Pixar and Marvel. He is also the CEO behind the blockbuster film Frozen.

Iger proved himself when it comes to general growth at Disney. During his tenure, market value, revenue, and profit climbed in the triple digits. All of this means he is probably the best person to put Disney back on the right track. 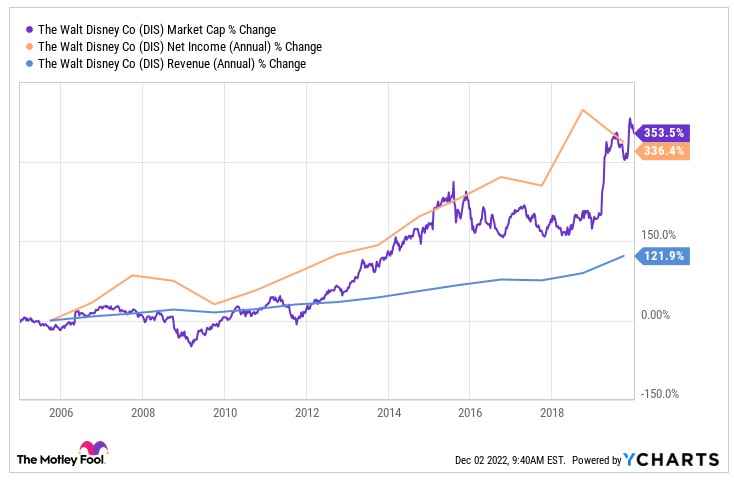 The strength in the parks business is another bright spot. That business’ revenue rose 73% in the recently ended fiscal year. And parks, experiences, and products traditionally has contributed the most to the company’s total revenue.

Today, Disney trades for about half of what it was trading for earlier this year — that’s in relation to forward earnings estimates. So now is time to get in on this recovery story. 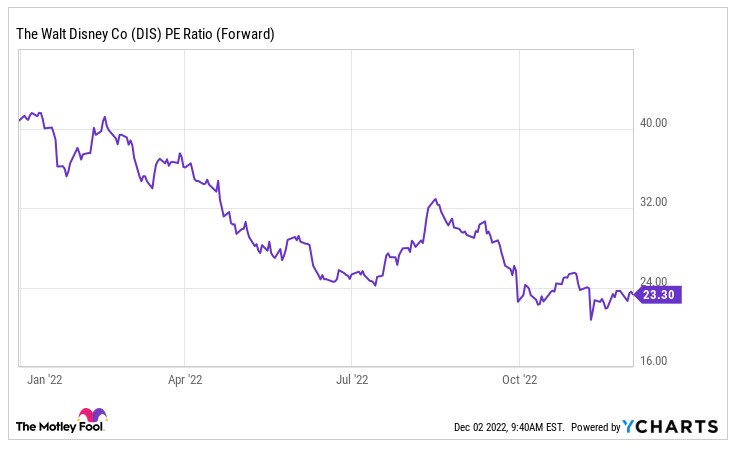 3. Etsy
Etsy (ETSY) soared during the early days of the pandemic, when people opted for online shopping over in-store visits. The company is a platform connecting sellers of handmade items with buyers.

Since then, Etsy’s growth has slowed. And the shares are heading for a 36% loss this year. That said, the company is weathering the economic storm better than most retailers. Sellers are small businesses, so elements like supply chain issues and inventory woes are less of a problem.

Etsy actually managed to grow its marketplace gross merchandise sales (GMS) 0.2% in the third quarter. That’s excluding the impact of currency exchanges. And if we compare it with the pre-pandemic third quarter of 2019, GMS jumped 134%.

The company also has done a great job of growing its audience — and keeping shoppers loyal. Habitual buyers made up 46% of GMS in the quarter. And Etsy brought in 6 million new buyers.

Today, it trades for 33 times forward earnings estimates. That’s down from more than 60 earlier this year. Considering Etsy’s strength in revenue and the loyalty of its shoppers, future prospects look good. And that’s why today’s price is a real bargain.

4. Intuitive Surgical
Intuitive Surgical (ISRG) is the global leader in robotic surgery — by far. The company holds nearly 80% of the market, according to BIS Research. And this leadership is likely to continue for two reasons.

First, surgical robots cost more than $1 million. So once a hospital has made this sort of investment, it’s likely to stick with it. Second, most surgeons are trained on Intuitive’s flagship da Vinci system. It’s unlikely they’ll want to switch to an entirely new system from one they know well.

What else to like about Intuitive? Its revenue model doesn’t depend only on the sales of these robots. Intuitive also has a source of recurrent revenue. And this revenue actually surpasses that of robot sales. I’m talking about sales of the instruments and accessories that surgeons need for each procedure. 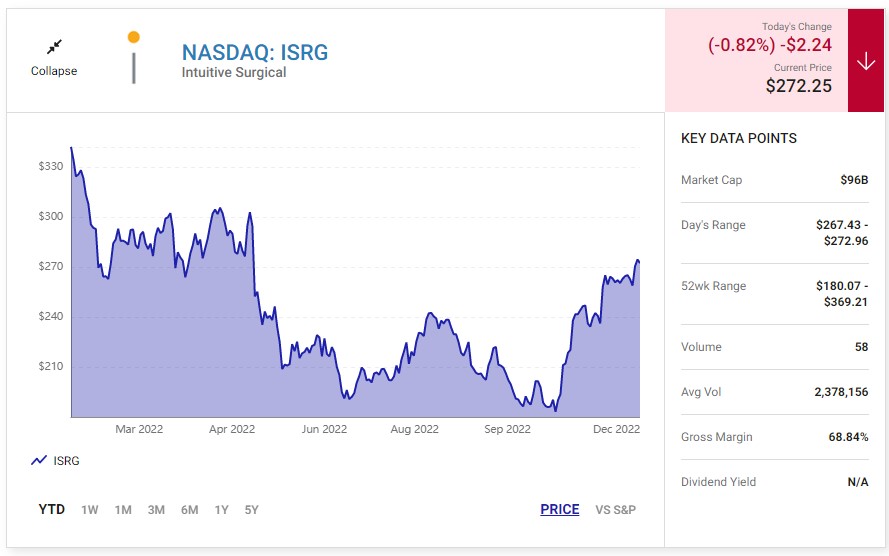 Intuitive’s recent share performance doesn’t reflect this great business model. This year, the stock is heading for a 23% decline. The company suffered on and off during the pandemic as hospitals postponed surgeries. That meant hospitals didn’t have to invest in instruments right away. They also didn’t focus on buying new robotic systems.

Today, Intuitive trades at 58 times forward earnings estimates. That’s compared with more than 72 earlier this year. Considering the long-term leadership picture, now is time to load up on this healthcare player.

5. Home Depot
Home Depot’s (HD) earnings have defied the bear market. But its stock performance hasn’t. The shares are heading for a 21% drop this year. And the shares are a screaming buy at less than 20 times forward earnings estimates. 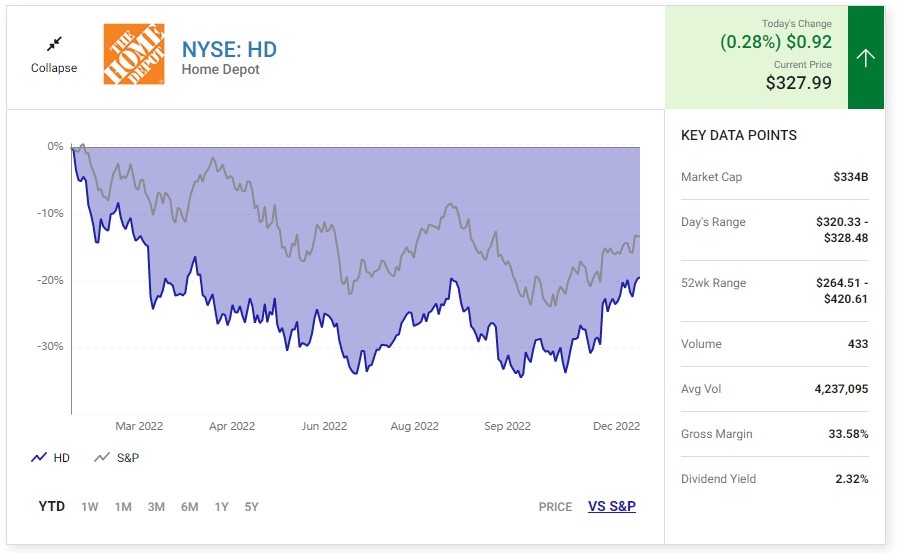 The world’s biggest home-improvement retailer says demand has remained strong in both its do-it-yourself (DIY) business and professional business. Importantly, the pros say their project backlogs are strong. This suggests they will continue to shop at Home Depot in the coming months as they launch these new projects. And that’s great news for Home Depot’s revenue.

The pro market totals $450 billion, offering Home Depot room for growth. The company is making efforts to keep these customers and its DIY shoppers loyal.

For example, it’s adding new features to its app to streamline the shopping experience. The efforts are working. The company has seen double-digit growth all year in monthly active users. That’s compared with last year.

And in the most recent quarter, 11 of the 14 merchandising areas posted positive comparable sales. All of this means there’s reason to be optimistic about Home Depot’s future earnings. And earnings growth could translate into major share gains. So, now, before 2023, is the perfect time to add this winning player to your portfolio.