Few high-profile money managers have a nose for making money quite like Berkshire Hathaway (BRK.A) (BRK.B) CEO Warren Buffett. In the 57 years since taking the reins, the Oracle of Omaha, as he’s come to be known, has led his company’s Class A shares (BRK.A) to a jaw-dropping average annual return of 20.1%.

Buffett’s willingness to stick with his investments for many years (if not decades) and his love of dividend stocks are two reasons he’s been such a successful investor. But a key ingredient to Buffett’s success that’s often overlooked is his portfolio concentration.

The Oracle of Omaha believes diversification is “protection against ignorance.” In other words, buying a boatload of stocks makes sense only if you don’t know what you’re doing, according to Buffett. Although Berkshire Hathaway’s $313 billion investment portfolio has stakes in around four dozen securities, more than $241 billion of invested assets — 77% of total portfolio value — is tied up in just six stocks.

1. Apple: 40.5% of invested assets
Warren Buffett’s love for portfolio concentration is readily on display with his company’s position in Apple (AAPL). The tech stock makes up an astounding 40.5% ($126.6 billion) of invested assets and has been labeled by the Oracle of Omaha as one of Berkshire Hathaway’s “four giants.”

There is a long list of reasons for Buffett and his investment team to have such strong convictions in Apple. This includes having a well-known brand, an exceptionally loyal customer base, and a product and service lineup driven by innovation. For instance, introducing 5G-capable iPhones has helped Apple maintain approximately half of the U.S. smartphone market share.

Apple’s evolution has also seen it become a force in the subscription services space. This ongoing transformation to a platform-based operating model should accelerate its organic growth rate, boost its operating margin, and minimize the revenue fluctuations associated with physical product replacement cycles.

As one final note, Apple’s capital return program is unmatched. It pays out nearly $14.8 billion in dividends annually and has repurchased roughly $520 billion of its own common stock since the beginning of 2013. 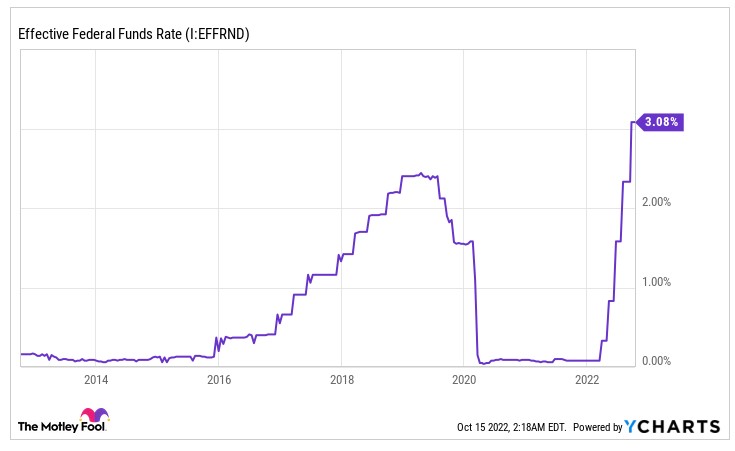 2. Bank of America: 10.5% of invested assets
Though Apple is Berkshire Hathaway’s largest holding by a significant amount, bank stocks will forever be Warren Buffett’s favorite industry. The $32.7 billion invested in money-center giant Bank of America (BAC) is no surprise at all.

The beauty of bank stocks is their cyclical ties. Even though recessions are an inevitable part of the economic cycle, they’re usually short-lived. By comparison, periods of economic expansion almost always last for years. Banks benefit from disproportionately long periods of expansion by growing their loans and deposits. It’s a simple numbers game that favors patient investors like Buffett.

On a more company-specific level, Bank of America is the most interest-sensitive of the big banks. When the interest rate yield curve shifts, no bank sees its net interest income rise or fall more than BofA. With the Federal Reserve aggressively raising interest rates to tame historically high inflation, Bank of America can expect billions of dollars in added net interest income on its outstanding variable-rate loans.

BofA has a sizable capital return program as well. During bull markets, it’s not uncommon for the company to return in excess of $20 billion to shareholders annually via dividends and buybacks. 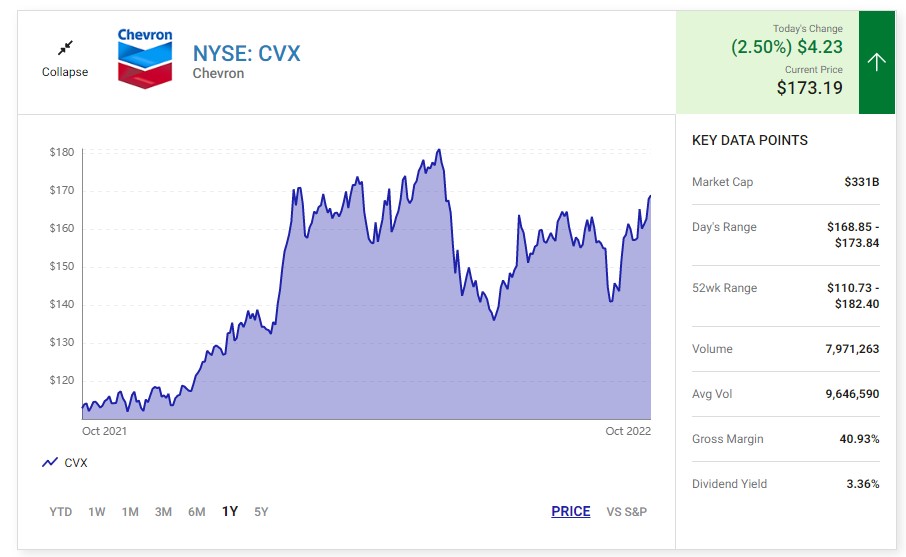 Betting big on energy isn’t something Warren Buffett is known for. However, certain factors do suggest that energy commodity prices could remain elevated for years to come. Russia’s invasions of Ukraine, coupled with global energy majors’ significant reduction in capital investment during the COVID-19 pandemic, will make it difficult to quickly boost the global supply of crude oil and natural gas.

You shouldn’t be shocked to learn that Chevron is also quite generous with its capital return program. Chevron has raised its base annual payout for 35 consecutive years, and the company may repurchase up to $15 billion of its shares this year.

Strong branding plays a key role in Coke’s long-term outperformance. Few companies on the planet can cross generational gaps with ease and connect with consumers. Coca-Cola can do this by utilizing social media and well-known ambassadors to reach younger consumers while leaning on its holiday tie-ins to connect with more mature audiences.

Coca-Cola’s geographic diversity is another reason for its bubbling success. With the exception of Cuba, North Korea, and Russia (the latter is due to its invasion of Ukraine), Coke has operations in every country worldwide. It holds about a 20% share of the cold beverage market in developed countries, which produce predictable cash flow, and a 10% share of the cold beverage space in faster-growing emerging markets.

Coca-Cola is a big-time dividend payer, too, with a 60-year streak of increasing its base annual payout. More importantly, Berkshire is netting an amazing 54% yield on Coca-Cola relative to its initial cost basis of about $3.25 per share. 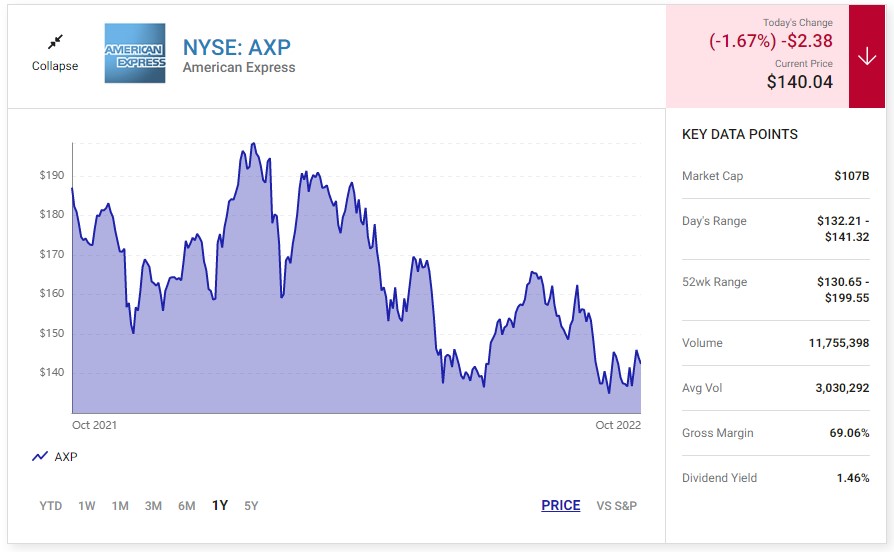 5. American Express: 6.6% of invested assets
Have I mentioned Warren Buffett likes financial stocks? Second only to Coca-Cola in a continuous holding period is financial services company American Express (AXP). AmEx, as it’s better known, has been a Berkshire Hathaway staple for the past 29 years.

Similar to Bank of America, AmEx benefits from long periods of economic expansion. Specifically, it’s able to “double dip.” In addition to collecting payment processing fees from merchants, it acts as a lender via credit cards. Lengthy bull markets give AmEx an opportunity to generate interest income and fees.

Buffett should also be happy with AmEx’s ability to attract affluent clientele. High-earning individuals are less likely to alter their spending habits or fail to meet their repayment obligations during minor domestic or global economic hiccups. These well-to-do customers help AmEx navigate downturns better than most lenders.

Further, American Express is an income powerhouse — at least to Berkshire Hathaway. Thanks to a low cost basis of $8.49 per AmEx share, Buffett’s company is netting a 24.5% annual yield on cost! 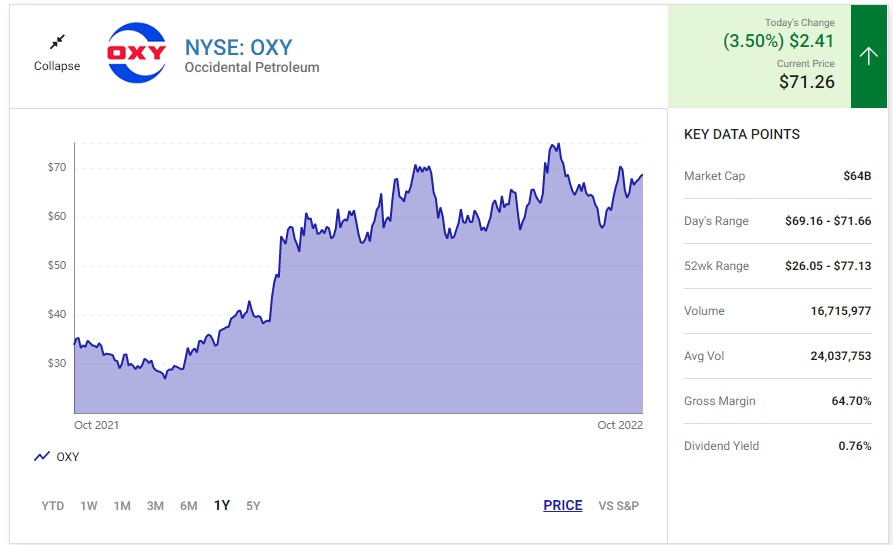 Among these six top holdings, Occidental is the newest and, arguably, the position Buffett has built up most aggressively this year. Pardon the pun, but the catalysts fueling Chevron are the same for Occidental Petroleum. As long as the global energy supply chain remains broken or constrained, demand should provide a healthy floor beneath the price of crude oil and natural gas.

Though it’s an integrated provider like Chevron, even more of Occidental’s sales are skewed toward its drilling and exploration operations. If oil and natural gas prices remain well above average, Occidental Petroleum has a chance to benefit even more than Chevron.

To keep with the theme, there’s a handsome capital return in store for Berkshire Hathaway. Though Occidental’s 0.8% dividend yield is nothing to write home about, Berkshire is generating an 8% annual yield on its $10 billion preferred stock position. Altogether, Buffett’s company should collect $901 million in dividend income from Occidental Petroleum over the next 12 months.