This year has served as an unpleasant reminder that the stock market doesn’t move up in a straight line. Since the year began, the benchmark S&P 500 and growth-centric Nasdaq Composite have each fallen into a bear market with peak declines of more than 20%. To boot, the U.S. economy has delivered back-to-back quarters of gross domestic product declines on the heels of historically high inflation.

In other words, it’s a worrisome time for investors — and especially retirees who can’t afford to lose their principal investment.

But when trouble looms on Wall Street, historically, so does opportunity. That’s because every major stock market correction has eventually been cleared away by a bull market rally. This means that in spite of heightened volatility in the short run, it’s the perfect time for aged investors to pounce.

What follows are three ideal high-yield dividend stocks for retirees that have the potential to turn an initial investment of $350,000 into $1 million by 2030.

What typically makes healthcare stocks such a genius investment is their defensive nature. No matter how poorly the U.S. economy or stock market perform, there’s always going to be demand for prescription drugs, medical devices, and healthcare services. 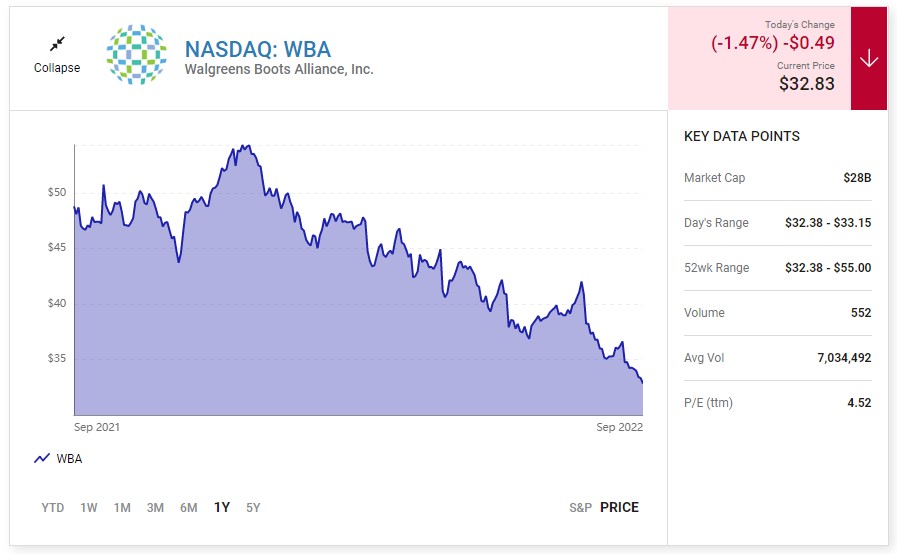 However, the COVID-19 pandemic proved to be one of the few exceptions to this rule, at least for Walgreens Boots Alliance. Because Walgreens is reliant on foot traffic into its stores, the lockdowns associated with the pandemic hurt its sales and bottom line. Like other retailers, it’s also contending with historically high inflation and the negative effect that can have on consumer spending.

And yet, there are numerous reasons to be excited about Walgreens’ prospects as it enacts a multipoint turnaround strategy designed to boost its operating margins, organic growth rate, and customer loyalty.

To begin with, management noted at the end of fiscal year 2021 (the company’s fiscal year ends on Aug. 31) that it had surpassed $2 billion in annual cost savings a full year ahead of schedule. But it’s not the company’s cost-cutting that’s going to raise eyebrows. It’s where management is aggressively pulling levers.

One area where Walgreens Boots Alliance is sparing no expense is with its various digitization initiatives. Even though the company will continue generating most of its revenue from its brick-and-mortar stores, the pandemic has demonstrated the value of having a more prominent online presence. Walgreens has invested heavily in its direct-to-consumer platform, which should lead to healthy organic sales growth.

What’s more, Walgreens Boots Alliance has partnered with (and become a majority investor in) VillageMD. The duo has opened 120 co-located, full-service health clinics, as of May 31, 2022, with a goal of opening 1,000 clinics in over 30 U.S. markets by the end of 2027. Offering physician-staffed clinics differentiates Walgreens’ clinics from its competition and should drive repeat business.

Valued at roughly seven times Wall Street’s forecast earnings for 2023, Walgreens has a safe floor to go along with its promising upside and rock-solid 5.6% yield. 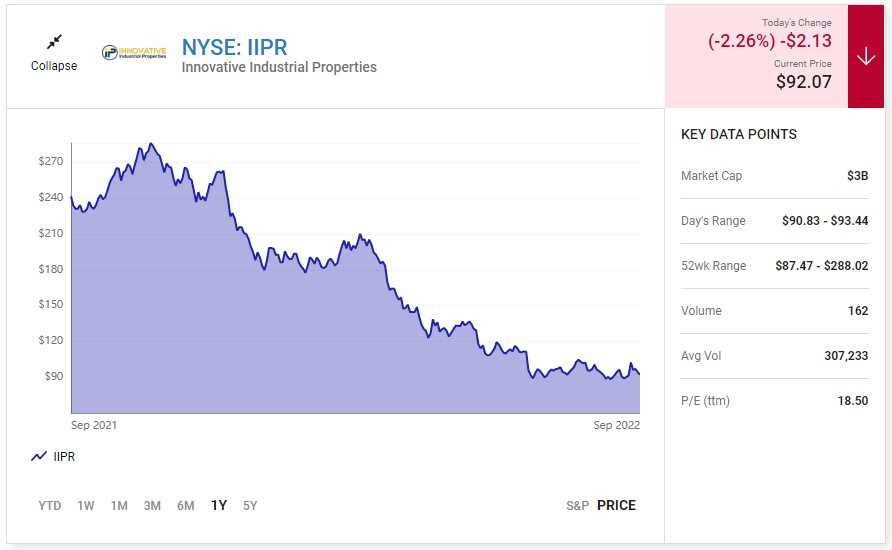 Just 20 months ago, marijuana stocks were all the rage on Wall Street. With Democrats taking narrow control of Congress and Joe Biden winning the presidency, the expectation was for sweeping federal cannabis reforms. Unfortunately, no reforms have taken shape and pot stocks have been pummeled as a result.

However, individual states maintain the right to legalize and regulate marijuana. Around three-quarters of all states have given the green light to medical cannabis, which provides more than enough opportunity for a company like IIP to profit.

Innovative Industrial Properties’ business model is just like any other REIT… except for the cannabis focus. As of early September, IIP had purchased 111 medical marijuana cultivation and processing facilities spanning 8.7 million square feet of rentable space in 19 states. Although acquisitions are IIP’s primary source of growth, it does have a modest organic growth component built in that allows for inflationary rental increases to be passed along to its tenants each year.

What makes REITs so valuable for retirees is the predictability of their operating cash flow and their dividends. As of the end of June, 99% of IIP’s rents were being collected on time. Meanwhile, REITs are required to pay out a majority of their earnings as a dividend, which is what allows them to avoid normal corporate income-tax rates.

Another big catalyst for IIP is the lack of cannabis reforms at the federal level. Innovative Industrial Properties has benefited immensely from its sale-leaseback program, which involves purchasing facilities from multi-state operators for cash and immediately leasing them back to the seller. Because access to basic financial services is limited for cannabis companies, IIP has turned this lack of reform on Capitol Hill into a positive catalyst that bolsters its long-term rental portfolio.

Intel: 4.96% yield
The third ideal high-yield dividend stock for retirees that can turn $350,000 into $1 million by 2030 is semiconductor behemoth Intel (INTC). Intel’s roughly 5% yield is the juiciest payout its shareholders have ever received.

Like most cyclical stocks, Intel is taking it on the chin at the moment. A combination of economic weakness, high inflation, and employees returning to the office has slowed personal computer (PC) sales and data center spending — at least temporarily. To boot, Advanced Micro Devices (AMD) has been chipping away at Intel’s mobile and server central processing unit (CPU) market share.

While this would appear to be a less-than-ideal scenario for Intel, a deeper dive points to an inexpensive cash-flow juggernaut that has multiple catalysts on the horizon.

First, concerns about Intel’s loss of market share look to be an overreaction. According to second-quarter market share data from Mercury Research, Intel maintains desktop PC, mobile, and server market share in the neighborhood of 75% to 86%. Even if AMD were to continue slowly chipping away at Intel’s PCU market share, the sheer growth potential of mobile devices and data-center servers should allow Intel to steadily grow its sales and generate abundant cash flow. 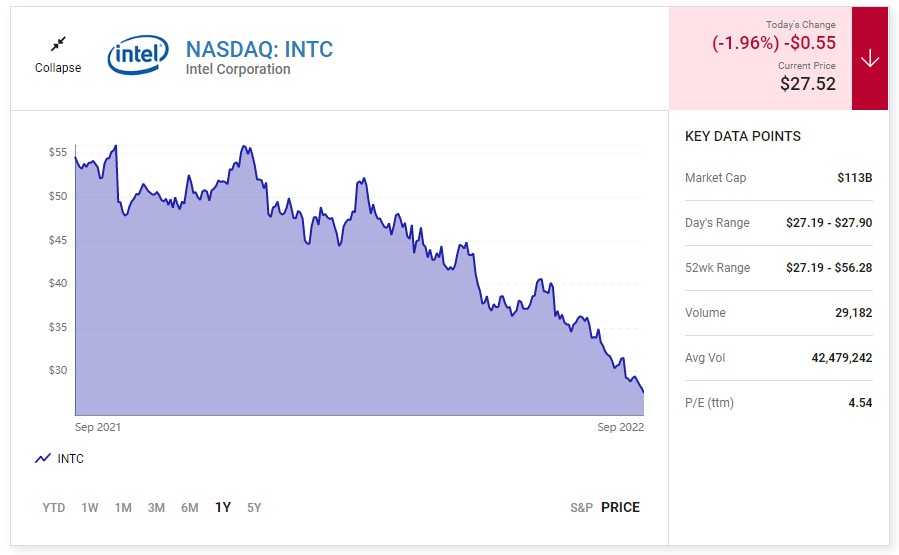 Intel is also a prime beneficiary of the CHIPS and Science Act, which was signed into law by President Joe Biden last month. The CHIPS Act will provide $52.7 billion in subsidies to chip designers and manufacturers, with the goal of boosting chip production, innovation, and hiring within the United States. Intel, which is spending $20 billion to build two manufacturing plants in Ohio, could eventually up its presence to eight total factories with federal aid.

Sometime soon, we should also witness the spinoff and initial public offering (IPO) of autonomous vehicle company Mobileye, which Intel acquired in 2017 for $15.3 billion. Mobileye delivered 41% year-over-year sales growth in the most recent quarter, with annual run-rate revenue of $1.84 billion. The expectation is for Mobileye to command a valuation of $30 billion for its IPO. In short, Intel looks to have made a wise acquisition.

Despite short-term headwinds, Intel has the catalysts needed to nearly triple the initial investment of retirees by the end of the decade.