Last fall, I wrote that Big Tech stocks like Meta Platforms (Nasdaq: META), formerly known as Facebook, were headed for big trouble after a decade of dominance.

In fact, the relentless demand driving the incredible returns of giant companies in 2021 was fueled by one thing… rock-bottom interest rates.

It’s like I said last fall – there’s an inverse relationship between tech stocks and interest rates.

As I predicted, interest rates have skyrocketed and tech stocks have collapsed.

It’s music to my ears because I’ve been waiting for years to buy some of these great technology companies at thrilling prices.

One of the most obvious fat pitches in the tech sector is currently Meta.

This cash flow machine is now being valued like a below-average business. Yes, Meta has some challenges and undesirable qualities. But make no mistake – this is an incredible business.

Today, the stock market is now valuing Meta’s business as being worth $414 billion, down from $1 trillion last fall. 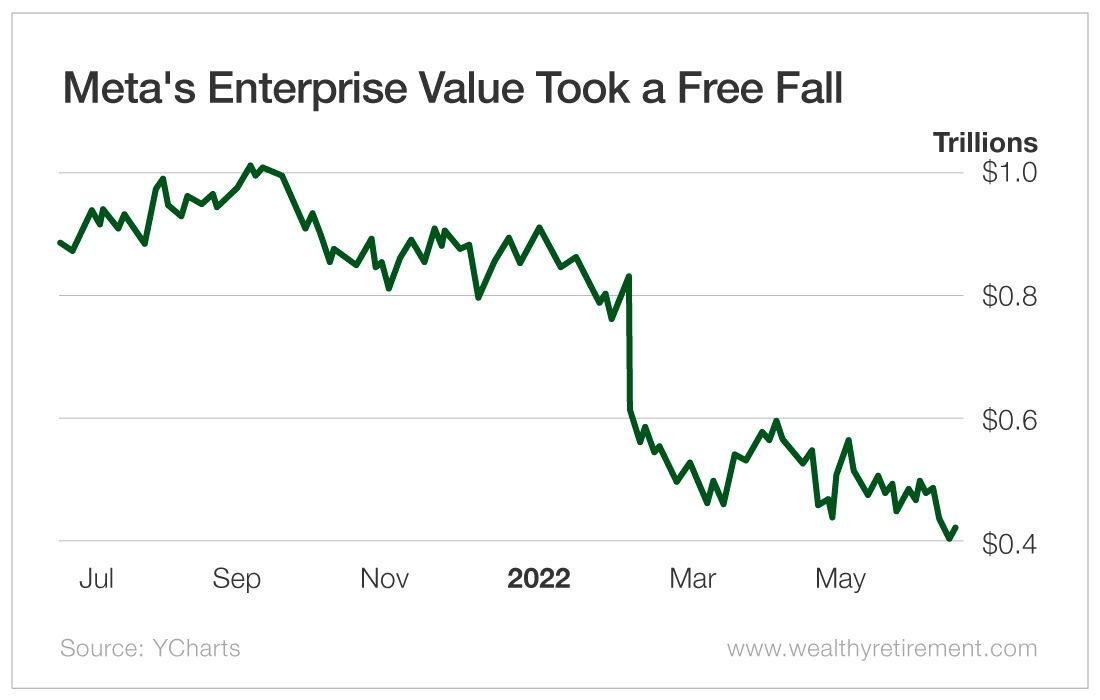 At Meta’s current $414 billion market valuation, buyers of Meta shares are getting a business that earned $39 billion last year.

My experience is that a near-double-digit earnings yield like this is a fair price for a mediocre business that has zero growth prospects and no competitive moat – not a multiplatform company like Meta, which has 3.64 billion users across its platforms.

“Mediocre” is most definitely not the word to describe this company.

In fact, on a cash flow basis, Meta’s shares look even more attractive.

Six months ago, you never could have convinced me that we would get another chance to buy Meta shares at such a meager valuation.

And while Meta’s growth is slowing (how could it not given how massive this company has become?), it most definitely isn’t done growing.

That’s an impressive year-over-year increase of 18% in earnings per share.

But remember that even if you doubt Meta can grow this much in the years ahead, the reality is that there is zero growth being priced into Meta’s shares right now.

At these kinds of earnings and cash flow yields, Meta is being valued as a company that is done growing forever. I don’t believe that for a second.

With a pristine balance sheet, an incredible ability to generate cash and an absurd captive audience of 3.64 billion people, Meta Platforms is currently rated “Extremely Undervalued.”

We’ve been patiently waiting for a major tech sector sell-off here at Wealthy Retirement, and now is the time to take advantage of it…