“Ah Redfin,” Glenn Kelman wrote in an all-staff e-mail two weeks ago, “I’m sorry to say that we’re asking about 8% of our employees to leave…”

The online real estate brokerage’s CEO went on to announce a sweeping layoff. It was either that or cease to exist…

Redfin (RDFN) stock is down more than 90% since February 2021. And last month, demand came in at 17% less than the brokerage expected.

It might feel like another housing crash is on the horizon. That’s what we saw last time around… And it fueled the worst recession of our lifetimes.

Today is different, though. And if you’re betting on home prices plummeting soon, you may be stuck waiting.

Mortgage rates have nearly doubled this year alone. They’re nearing a 14-year high. And the Housing Affordability Index explains what that means for the average homebuyer.

This index looks at three ingredients… wages, home prices, and interest rates. These factors determine if folks can afford a house payment or not.

In other words, we’re in a historically tough time to afford a home. And that environment is hurting demand.

New builds are slowing down as a result. The U.S. Census Bureau records the total number of groundbreakings for new homes. As you can see, new housing starts fell more than 14% last month… 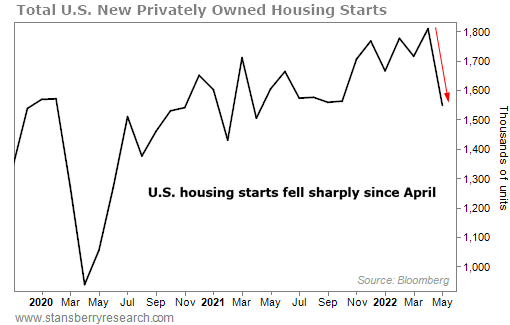 So affordability is low, and new builds are falling. This may feel like bad news for the housing market. But it doesn’t mean home prices will crater…

In fact, the median existing home price reached $407,600 in May – a record high. That’s because falling home construction is actually a tailwind for real estate assets. 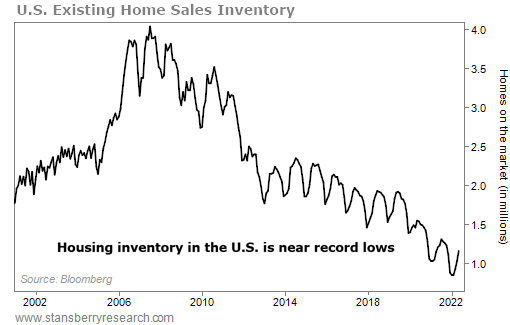 U.S. housing is near record scarcity. The National Association of Realtors put numbers to the shortfall last year. It wrote that we need between 5.5 million and 6.8 million units to close the gap.

This shortage will take more than a few months of falling demand to go away. It’s a multiyear problem. And it’s a backstop to real estate prices.

Instead of a crash, what we may see instead is a dip in how fast home prices are rising…

Home prices soared 20.6% in the year ending this March. And they gained 13.2% the year before that. It has been a furious two-year bull run… But it’s also completely unsustainable.

Home prices don’t usually grow by double digits. Before 2020, home prices rose less than 4% per year. And a reversion to the typical rate is much likelier than an all-out nosedive.

Of course, something unforeseeable could change the picture. But if you’re waiting for a crash to buy a house, there’s a good chance you’ll be waiting forever… And all the while, home prices will tick upward.

The future may hold surging rates and cooling demand. But until the inventory gap closes, a crash is unlikely.