The storm of headlines is exploding to extreme levels and investors on Wall Street are justifiably shy about buying stock. Nevertheless, I am sharing my priority list of stocks to buy on this crisis.

Last night the mere mention of malware attacks in the Ukraine sent markets tumbling. This dip then is a normal response but one that can provide investment opportunities. The indices are falling below levels they first saw last April. Clearly traders are on edge and they are selling everything first — maybe they will ask questions later.

We haven’t seen persistent selling like this in a very long time, so we should respect it. I am pretty optimistic about the health of the economy overall. These companies’ profit-and-loss statements and balance sheets support my thesis.

Most, if not all mega-cap stocks, are posting record results. Yet investors are selling off earnings headlines like the fundamentals were bad. We are seeing this even when companies meet estimates and double the business. The expectations were out of whack, but now we can add war fear. This is a great motivator, but once it abates the rally back can be violent the other way.

For now, the CBOE volatility fear index (VIX) is high but nowhere near the 2020 levels. In contrast, the headlines are as serious as ever, especially when they involve the potential of world war. The conflict in the Ukraine is still local, but it can turn multi-national quickly. So far the threats from outside nations are of economic nature. But politicians are not always the smartest people on the planet. In order to protect myself from potential stupidity, I will respect the current threats facing equities.

Today we continue with the homework to find stocks to buy. I will then act at the slightest hint of light at the end of the tunnel. My focus in on large-cap companies that have the weight to pull the whole market with them. The point of doing this is to eliminate as many question marks as possible. By picking today’s bunch I can eliminate the intrinsic success questions. For example, I have trust the earnings power of Meta Platforms (NASDAQ:FB), formerly known as Facebook, so I merely have to pick good levels. I don’t need to worry about whether the company is good, I just need to weather the headline storm.

The three mega cap stocks to buy on this dip are: 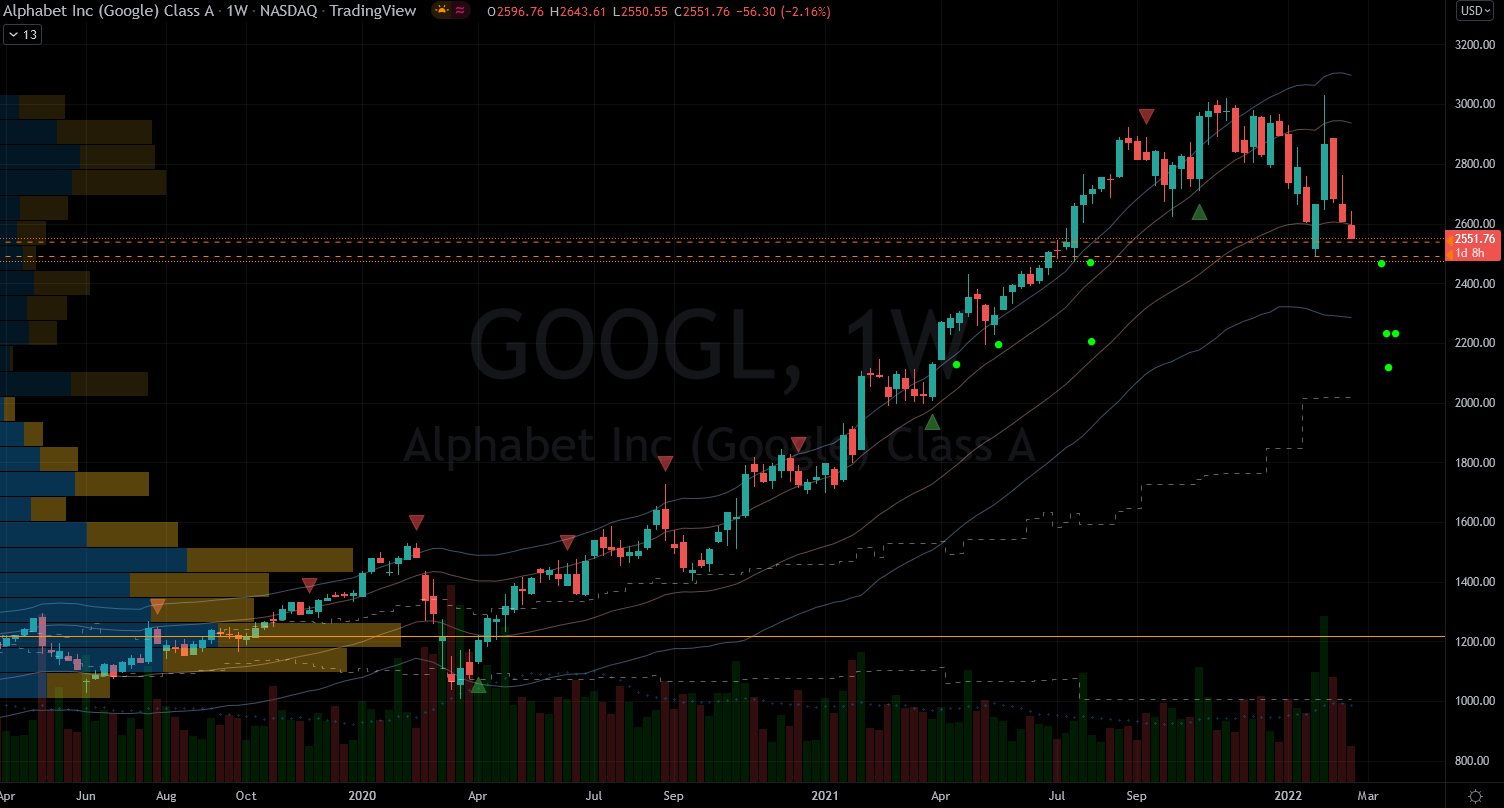 It wasn’t too long ago when Google was pretty much the only gig in town for search. Now there are a few other giants, the main one being Facebook. This didn’t slow Alphabet down one bit, because it is still a behemoth. The company has a tremendous earnings power delivering $258 billion in revenues, and $76 billion in net income. They now have their fingers in many pies, including self-driving technology with Waymo.

If the point of running a company is to make money, GOOGL stock is one way to bet on that. Nevertheless, it is taking a beating from this correction. Today it has fallen below the January lows, so it’s important they close above it. This was also the floor from its breakout last summer. If the bulls fail to reclaim, it could then target the $2,200 per share zone.

Based on the fundamentals alone, it is worth buying right here and now. But because of the current headline conditions, investors should temper their enthusiasm a bit. If long already, I would refrain from adding without further information about the geopolitical risks. If looking to get long, at best I would nibble with a starter position. It is important to leave room for error so to manage risk down the line.

Fundamentally the company is beyond reproach. It is hard to mess up the potential of having multiple platforms with billions of users each. I am on several of them daily, and I’m not alone in my family. They are in the thick of all hot trends, so they have an upside runway for decades. Whatever is ailing GOOGL stock now is most definitely temporary. This is also true for the next two stocks on our list today. 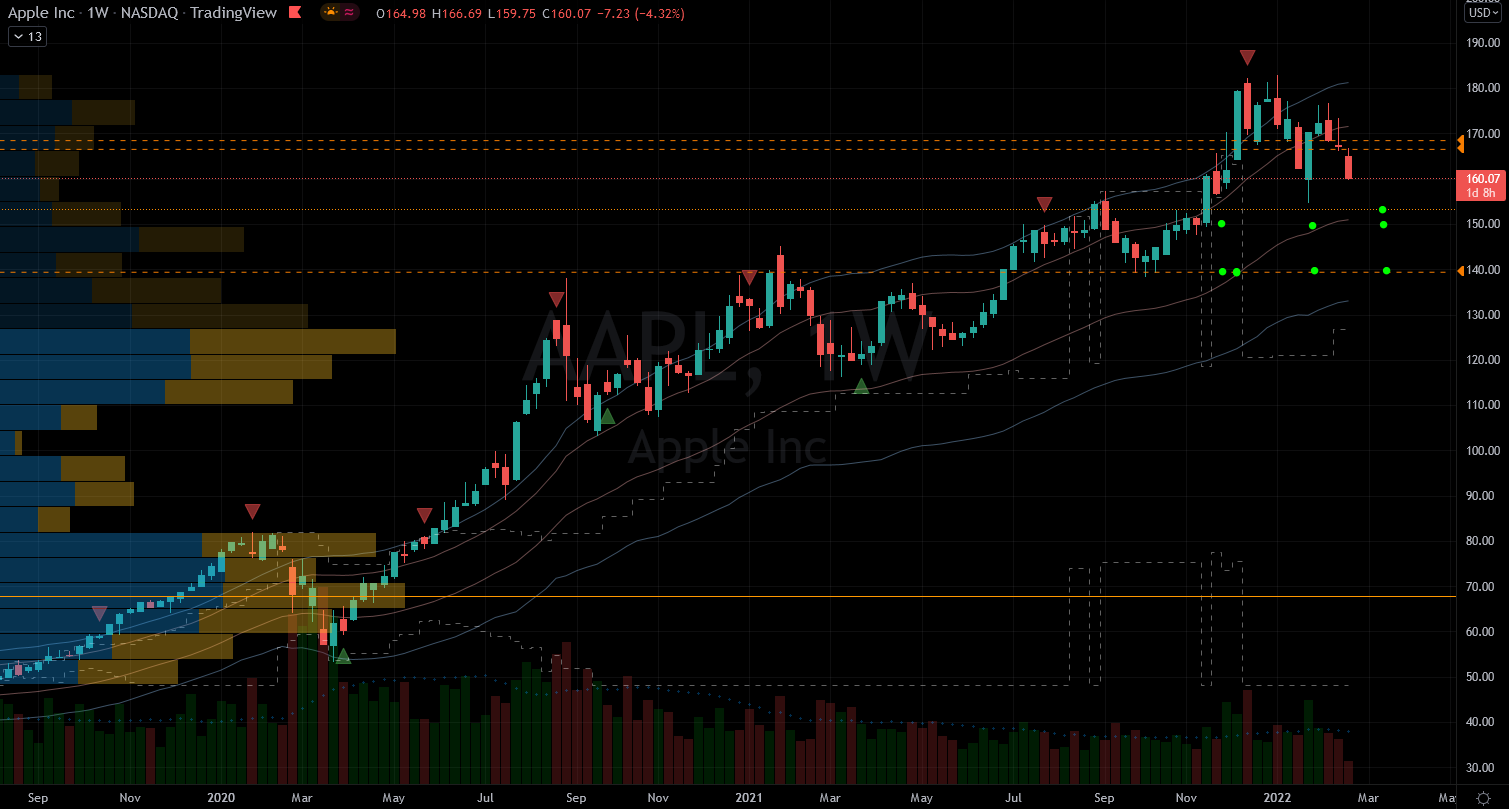 For many years, AAPL stock has been the envy of the world. It is the benchmark by which all other companies measure themselves. The financial metrics prove the fact that it is a giant cash machine rolling forward. I doubt that the current market ailments will affect it too long. This crisis shall pass, and when the markets rally back, AAPL will leading them.

Therefore, the dips now are buying opportunities by definition but with care. If you thought Alphabet metrics were impressive, check out the ones from Apple. Last 12 months they posted $378 and $101 billion in revenues and net income. Meanwhile, the stock is under pressure and should find support soon.

Today it is testing an area that was a top in September and a base for the November 21% rally. Such pivotal zones lend stocks support on the way down. That worked a month ago, so it is imperative it does again this week. Else and like Google, AAPL will accelerate lower. It can even target $141, which was the base for the October rally. Losing pivotal support normally opens new trap doors lower.

AAPL won’t do this alone without the indices actually crashing. Even then, my assumption is that the breach will be brief. In other words even though the bearish pattern may take it lower, the fans will buy it. There is absolutely nothing wrong with this company, just like our other two. Therefore I will be there to catch the falling knife one little piece at a time. 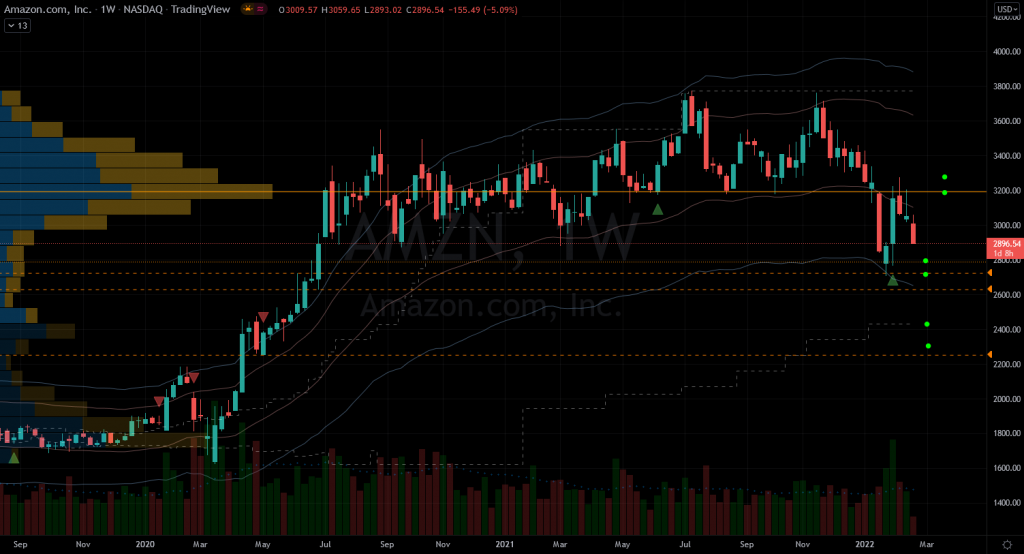 I don’t think there’s been a week without at least two Amazon trucks stopping by my house. I am most excited this week anticipating the arrival with my new AMD (NASDAQ:AMD) Ryzen9 power PC. Amazon served as the store to the world during the pandemic, and these habits will stick for a long time.

The fundamentals are beyond reproach and it has sustainability on its side. Financially it is on rails as it gobbles up industries. It is now the second largest private employer behind Walmart (NYSE:WMT). Founder Jeff Bezos built the perfect example of a perpetually growing company. As a result its revenues are $100 billion larger than Apple. That’s because they’ve maintained a very high growth rate for over a decade. Consequently its price-to-sales ratio is 3.3, twice cheaper than AAPL. I am a fan of AMZN on every significant dip.

Technically, its situation is slightly better than our other two. Because it has consolidated for a long while, it still holds above the January lows. But if AMZN stock falls below that, it could lose another 9% from there. None of our three stocks to buy will fall alone. These bearish scenarios will be in sympathy of global war worries.

Politicians have the power to crash the global equity markets and investors have to respect that. But if there are stocks to buy on dips, these three are it. Otherwise, then I have no business investing in the stock market altogether.

Meanwhile, moderation is key! I am very confident of everything I said about the fundamentals today. I am equally as sure that headlines can inflict more pain on investor psyche and temporarily mess things up. The key term is temporarily, because eventually there is an end to this.