After months of searching, my friend Mike joined an online forum.

It was a welcoming community – and surprisingly helpful. There was a network of users all pulling toward the same goal… the hunt.

With their help, Mike easily achieved his goal. First he bagged one, then quickly caught another. His profile rose and he climbed the ranks…

Mike is now one of the moderators who helps run the forum. He’s a seasoned hunter. He puts his experience to use by helping newbies net their own trophies from hundreds of miles away.

Demand for these components is outrageous. And markup has gone through the roof. For example, chipmaker Nvidia (NVDA) is about to launch a “budget” graphics card tomorrow. The device is already selling for double its MSRP.

All this strangeness is the result of one trend… the semiconductor shortage. It has made these cards – and many other electronics – almost impossible to find.

In fact, it has gotten so bad that despite all this demand, we’ve seen a massive sell-off in the sector. But as I’ll explain today, this setup is about to turn around for investors…

Semiconductor demand is soaring. The pressure is weighing on stocks of smartphone manufacturers, car companies, and makers of the elusive graphics card.

That should be a recipe for investment gains – supply is low, yet demand is high. But instead, investors are abandoning the sector in droves. We can see this by looking at the price action in one fund…

The iShares Semiconductor Fund (SOXX) is an exchange-traded fund that tracks a basket of 30 U.S.-listed semiconductor companies. And over the last month, it has taken a beating… 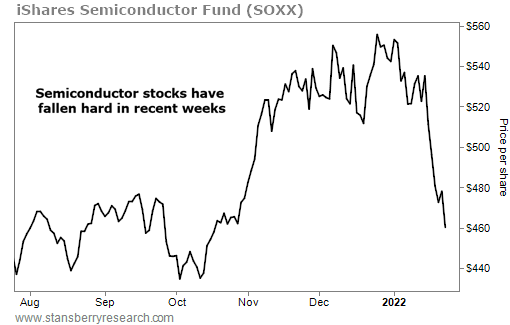 As of Tuesday’s close, SOXX had plunged roughly 17% from its December 27 peak. And most of those losses happened in just the last two weeks.

However, this sell-off pushed the fund past a key indicator on Monday. And that means a reversal could be on the way.

When investors head for the exits en masse, they can push a stock into “oversold” territory. That just means an investment went too far, too fast in a bearish direction. And when that happens, it’s a sign that a bounce back is likely.

You can quantify this with the relative strength index (“RSI”). When you see oversold levels in the RSI, it can be an indicator that a reversal to the upside is coming. And we got that signal with SOXX on Monday.

An oversold indicator hasn’t flashed for the fund since March 13, 2020. In other words, we haven’t seen this kind of signal since the peak of COVID uncertainty…

What’s more, similar setups over the last five years show that we can expect huge upside and strong outperformance. Take a look…

Semiconductor stocks have turned consistent profits for the last five years. Simply buying and holding SOXX has returned 13% in an average six-month period, and 29% in an average year. That’s fantastic in its own right. But buying after setups like Monday’s leads to clear outperformance…

Now, this is only the ninth oversold setup we’ve seen for SOXX in five years. Of those nine, eight turned a profit in six months, and all of them turned profitable over a year. So not only has this rare signal led to big gains… but also a high probability of success.

So, if you’ve been hoping to invest in the semiconductor space, now might be your moment. The trend hasn’t reversed yet. But history tells us that’s likely coming. When it does, huge upside is likely to follow.