Dividend growth investing didn’t just change my life. It saved my life. It allowed me to escape a situation that was making me miserable and slowly killing me.

I used to work way too many hours at a very stressful job in the auto industry. But I’m now financially free and able to do what I want, when I want.

Indeed, putting my capital to work with high-quality dividend growth stocks allowed me to retire in my early 30s. I went from below broke at the age of 27 to financially free at 33 – six years from start to finish.

I’m talking about world-class enterprises making a ton of money by providing society with what it demands. And they’re sharing that money with their shareholders in the form of reliable, rising dividends.

Since inflation means that things will continue to get more expensive over time, the growth of your passive income is key.

Today, I want to tell you about six dividend growth stocks that just increased their dividends. Ready? Let’s dig in.

The first dividend increase I want to share with you came from Franklin Resources (BEN).

Franklin Resources could rename the company “Dividend Resources” – because they’ve been a resource for growing dividend income for their shareholders for decades.

This marks the 42nd consecutive year of dividend increases for the global investment firm. 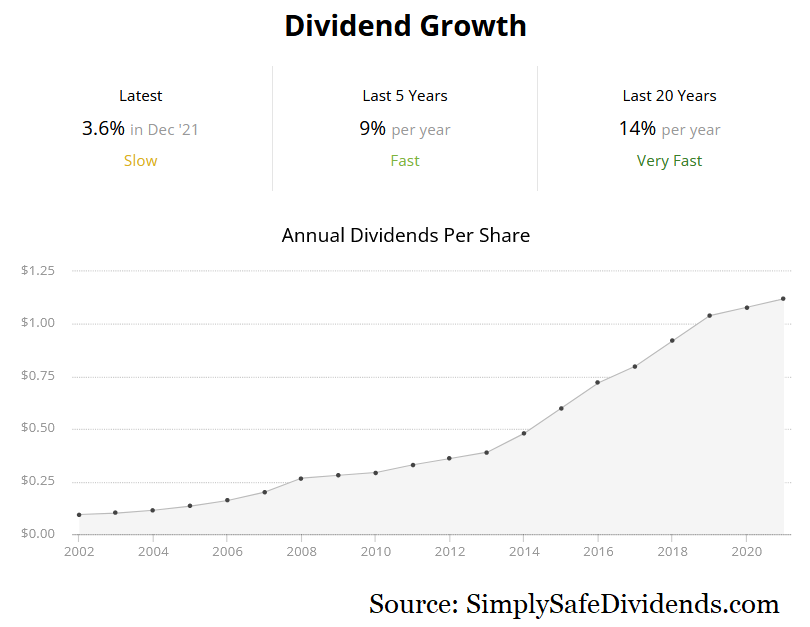 The 10-year dividend growth rate of 13.9% is very impressive. However, there has been a dividend growth deceleration in recent years, as this 3.6% dividend increase follows up last year’s 3.7% dividend increase. So that’s something to keep in mind. On the other hand, the stock yields 3.5%. So it’s a pretty good income producer in this environment. And with a low payout ratio of 32.5%, this dividend has plenty of room to go higher over the coming years.

This stock has one of the most undemanding valuations out there.

The P/E ratio is a lowly 9.4. That’s less than half that of the broader market’s earnings multiple. Now, this is a stock that is usually cheap – its five-year average P/E ratio is 15.5. However, the valuation is especially low right now. I actually prefer T. Rowe Price Group (TROW) in this space. It’s more expensive, but I think it’s worth the higher valuation. But if you fancy yourself a bargain hunter, Franklin Resources is in the discount aisle.

Next up, let’s talk about the dividend increase that was announced by Eli Lilly (LLY).

I’ve been a fan of Big Pharma for quite a while now. Big Pharma is providing the world with the medicine it demands, and it’s providing investors with the growing dividends they demand. As long as the former continues, so will the latter.

This is the eighth consecutive year of dividend increases for the multinational pharmaceutical company.

This stock has been a monster over the last year, but that’s pushed up the valuation to an uncomfortable level. 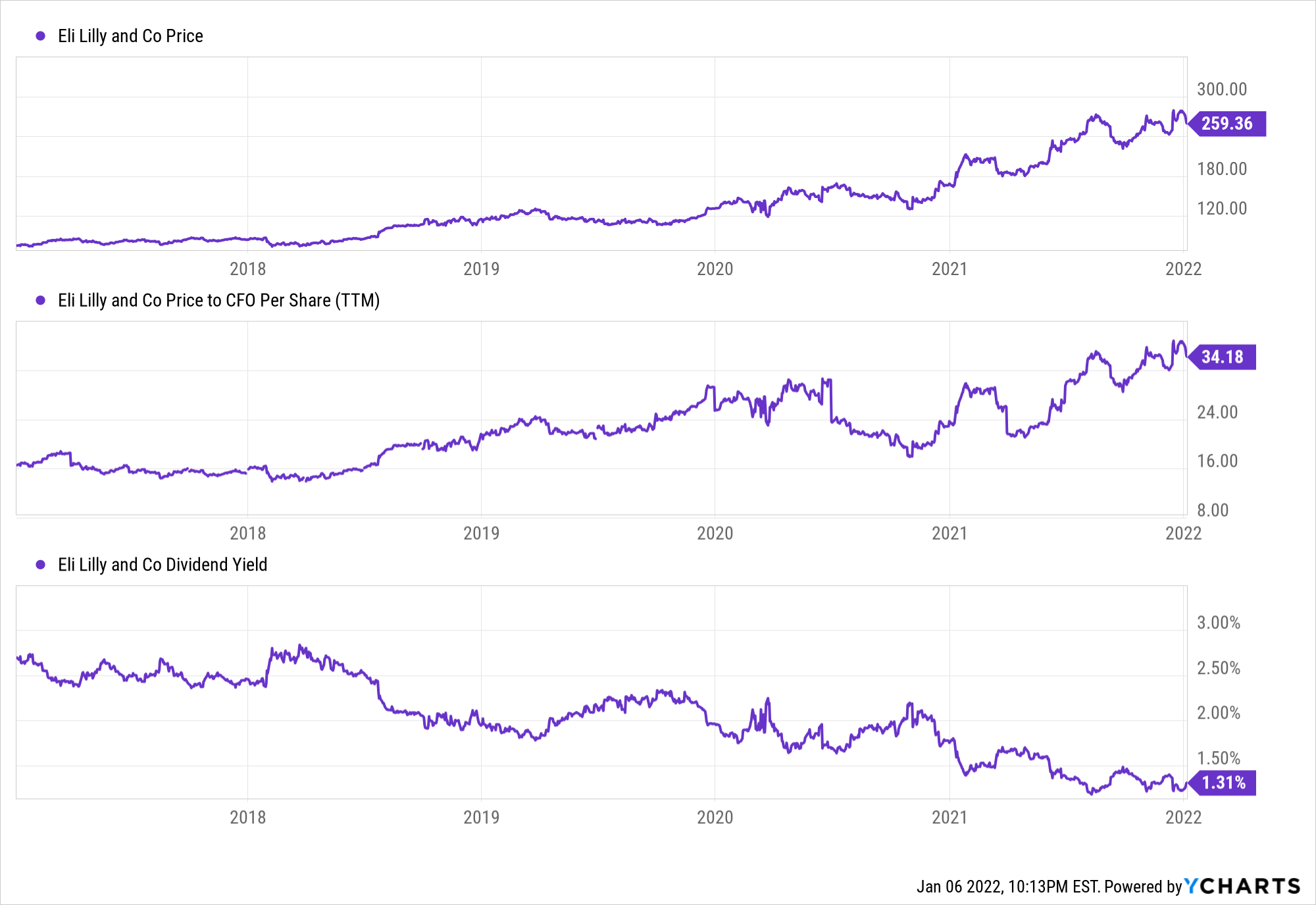 It’s up 64% over the last 52 weeks. Absolutely phenomenal. That’s great if you bought it before the run. But if you’re looking to get in now, it’s tough to swallow. The P/CF ratio of 35.8 is approaching nosebleed territory, and it’s well above its own five-year average of 22.4. I’m a huge, huge fan of Big Pharma. There’s lots of quality and value to be found there. But it’s tough to chase Eli Lilly here when you’ve got so many other options across the board that are offering lower valuations and higher yields. If a dip comes, though, this is a great name to have on the radar.

The third dividend increase to talk about is the one that came in from Bank OZK (OZK).

A 3.4% dividend increase by itself isn’t bad. It’s hard to complain about getting more money for doing absolutely nothing other than simply not selling stock. However, this dividend increase is better than it sounds. And I’ll tell you why in just a moment. First, let’s acknowledge this amazing track record.

The regional bank has now increased its dividend for 26 consecutive years.

Their 10-year dividend growth rate is a mouth-watering 21.8%. So how does that square with a relatively muted 3.4% dividend increase? Well, Bank OZK tends to increase its dividend every quarter. That’s right. So when you look at the year-over-year change in the dividend, it’s 8.1% higher. And that’s during an unprecedented period of uncertainty for banks. Not too shabby at all. Meantime, the stock offers a market-beating yield of 2.5% to go along with that strong, regular dividend growth. The very low payout ratio of 28.3% shows that investors can expect plenty more quarterly dividend raises.

This stock is up almost 50% over the last year, but the valuation is surprisingly reasonable. 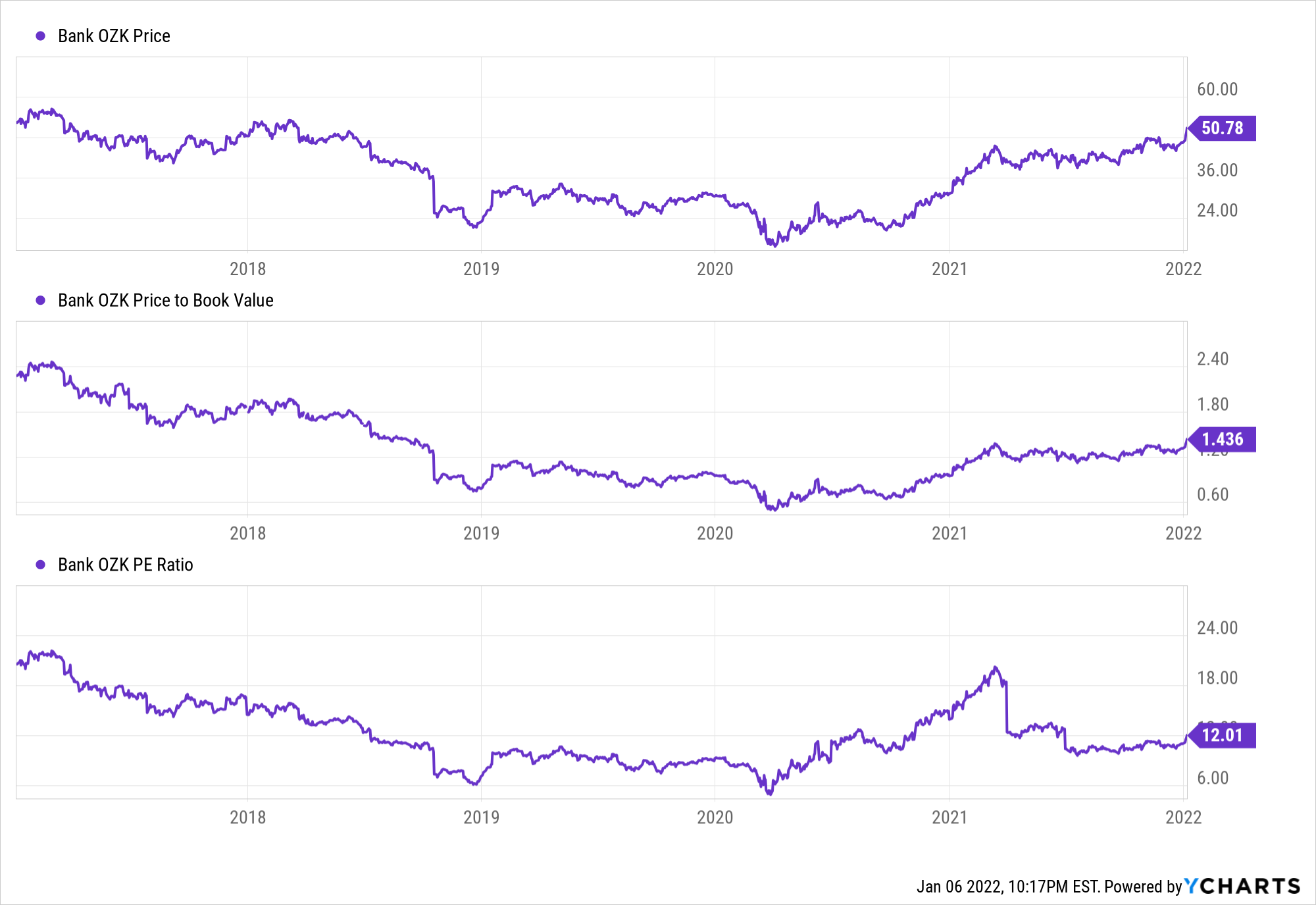 It’s not often that a stock still looks ripe for investment after a 50% run. In this case, it’s just that the stock was so cheap a year ago, that it’s now gone from abnormally cheap to a valuation that looks more along the lines of what’s fair. The P/B ratio of 1.3 lines right up with its own five-year average, and that’s right in line with what you’re typically looking at among banks in general. The P/E ratio of 11.1 is actually somewhat appealing. The five-year average for the stock is 12.3. We still have some room to go before the stock fully reverts to the mean. If you don’t already own this quarterly dividend raiser, take a look at it.

Let’s now have a quick discussion about the dividend increase that was announced by SEI Investments (SEIC).

This marks the 31st consecutive year of dividend increases for the financial services company. 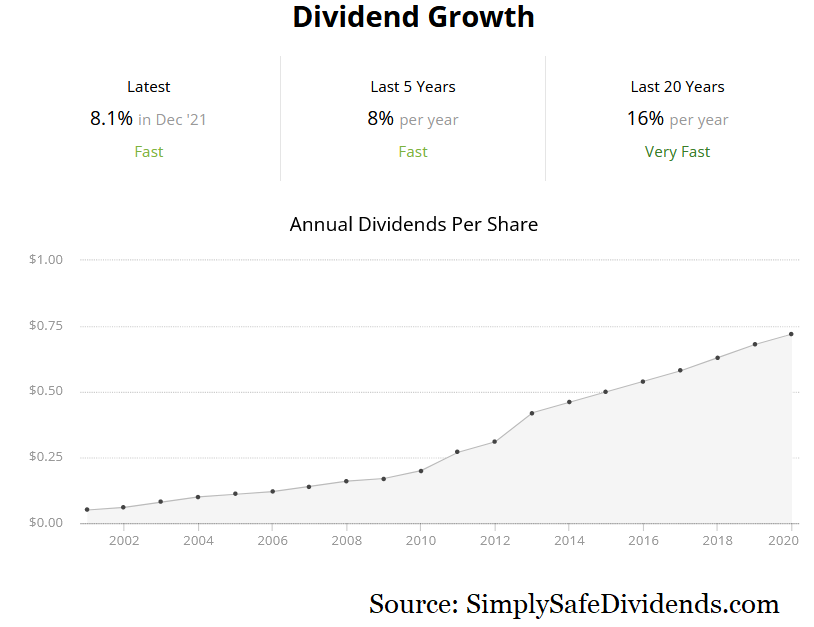 Just think about that for a moment. 31 years in a row in which you’re getting a raise in your passive income. I don’t know anyone with a day job who got a pay raise for 31 years in a row. And even if I did know someone like this, they would have had to work incredibly hard to get it. All SEI Investments shareholders had to do was to sit on stock. That’s a lot easier. The 10-year dividend growth rate of 13.9% is impressive. And you really do want to see double-digit dividend growth when you consider that the stock yields just 1.3% here. With the payout ratio sitting at 43.8%, I suspect that investors can look forward to many more sizable dividend increases in the years ahead.

The stock has been a laggard, and that could be a long-term opportunity.

It’s up about 6% over the last year, so the broader market smoked it. But valuation can act like a spring. And when you compress it enough, it’ll explosively unwind at some point. Every basic valuation metric I look at is below its respective recent historical average. That includes the P/E ratio of 16.8, which is well off of its own five-year average of 20.5. This is an interesting name that’s flying under the radar. And that could be where the opportunity is for long-term dividend growth investors. Take a look at it, if you haven’t already.

Next up, let’s dig into the dividend increase that was announced by Toro (TTC).

Toro just increased its dividend by 14.3%.

Double-digit “pay raise” for shareholders who had the ability to simply sit on shares and not sell them. That’s a lot of reward for what’s not a lot of hard work. But that’s why I love being a dividend growth investor. It’s the best and easiest “job” I’ve ever had!

The provider of solutions for the outdoor environment has now increased its dividend for 13 consecutive years.

The 10-year dividend growth rate is 18.7%, so Toro has been a lock for double-digit dividend raises. The stock only yields 1.2%, so this is more of a compounder than a yield play. And that makes it perfect for investors who have the patience to let that compounding process play out. With a payout ratio of 31.7%, the next 10 years should look a lot like the last 10 years. Since the last 10 years were pretty great, shareholders have a lot to look forward to. 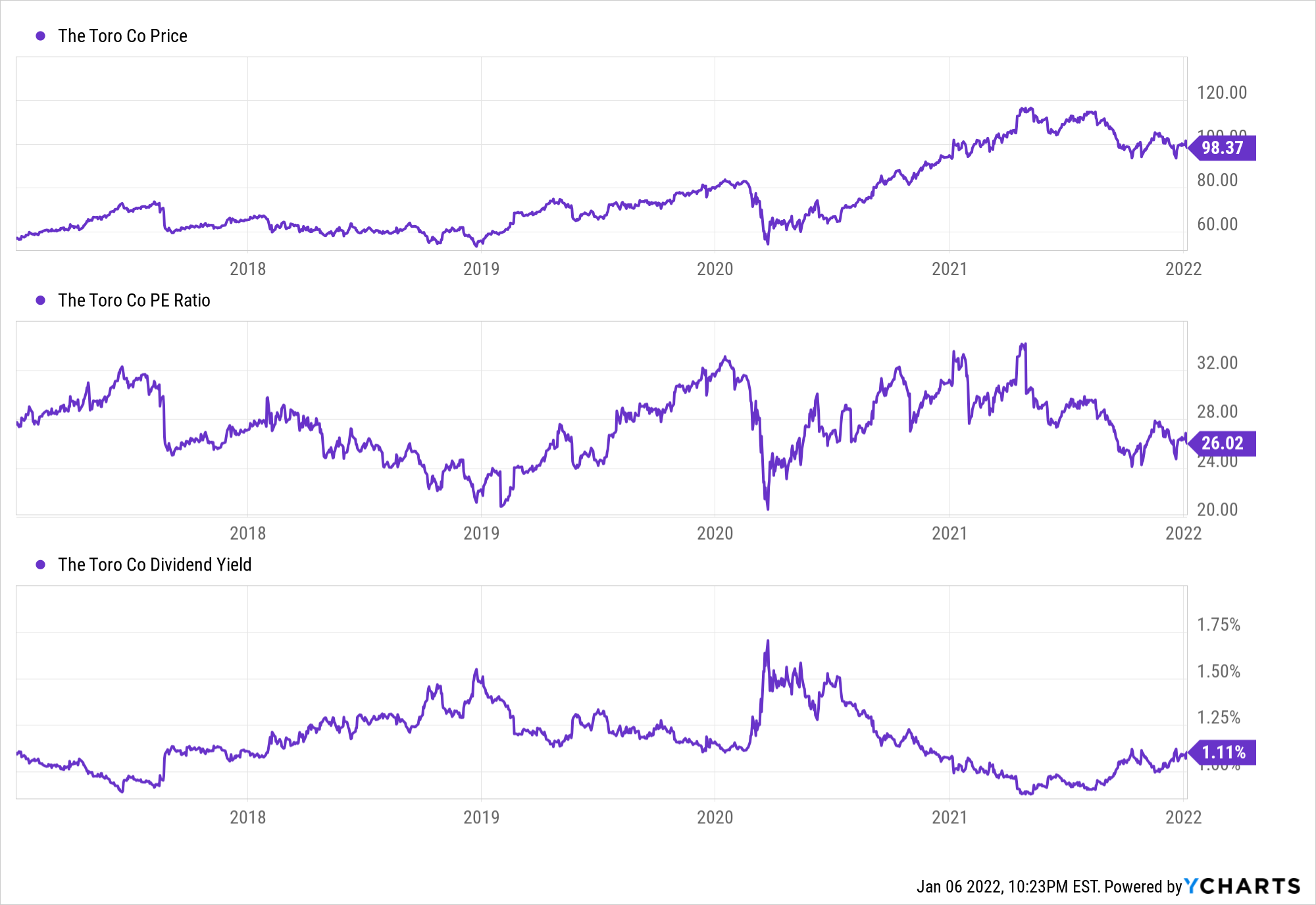 Sleepy little Toro just woke you up, didn’t it? That’s pretty amazing performance for a company that manufactures outdoor equipment like lawn mowers. What’s perhaps just as amazing is that the current valuation isn’t outrageous at all, and that’s because the 600% run has been powered by a lot of business growth rather than just outright multiple expansion. The P/E ratio of 26.4 isn’t all that high for a company that nearly quadrupled its EPS over the last decade. The five-year average P/E ratio for the stock is 27.9, so we have a slight disconnect here. Toro is worth a good look for those more interested in long-term compounding over straight up yield. After all, a lot of those yield plays tend to perform poorly over the long run.

Last but not least, let’s talk about the dividend increase that came in from WD-40 Company (WDFC).

High-quality divided growth stocks are perfect inflation fighters because their dividends are growing faster than the rate of inflation over the long run. So whatever your passive dividend income is today, you can bet it’s going to be a lot higher next year… and the year after that… and the year after that. This means you’re equipped to pay for higher prices, because your income is growing even faster than those price tags.

This is the 13th consecutive year in which the household products company has increased its dividend.

Best known for its eponymous WD-40, which can lubricate almost anything, this stock is also perfect for lubricating a portfolio and making sure its dividend income production will head higher. The 10-year dividend growth rate of 10.1% is proof of that. And with a payout ratio of 61.3%, which is slightly high but not at all unsustainable, the company maintains the financial ability to continue growing the dividend. The big issue with the dividend, perhaps, is the yield – at only 1.3%, it’s just not a big current income producer. Like Toro, it’s more of a long-term compounder.

It’s been a great performer, up more than 500% over the last decade. But the valuation is challenging. 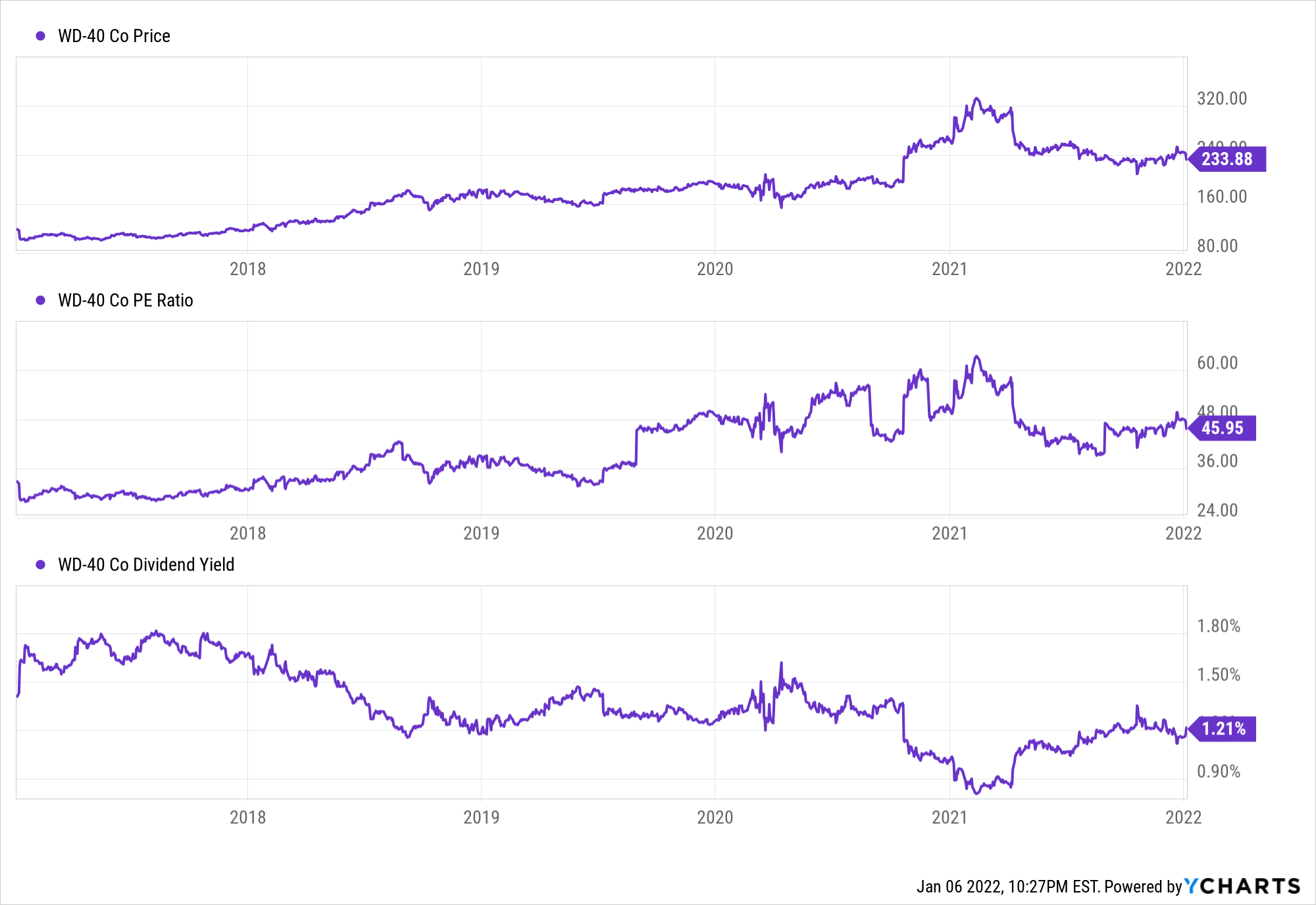 Most basic valuation metrics indicate overvaluation, including the P/E ratio of 47.8 – which is well ahead of its own five-year average of 41.1. Despite the incredible long-term performance, this stock is actually down slightly over the last year – a period in which the market screamed higher. I think that underperformance is at least partly owed to the overvaluation. It looks like it got ahead of itself, so it had to fall back a bit. I think some more valuation compression makes sense here, so it’s not something that I’d be chasing. But if a meaningful pullback occurs, WD-40 would be a great name to have on the radar.