With much of the focus lately on the electric vehicle (EV) market, one overlooked segment is the companies that make and sell the tires that these cars and trucks will use. With many valuations stretched for the stocks and companies that make EVs, Goodyear Tire & Rubber (GT) seems to be a cheaper way to play the sector, and with much less volatility.

Goodyear is one of the largest tire manufacturers in the world, and it strengthened its position after acquiring Copper Tire last summer. The company’s tires account for 75% of company revenues, but Goodyear also has businesses in retail service, chemicals, and mobility solutions that account for the rest of its sales.

In December, Goodyear announced its first replacement tire specifically designed for the EV market, known as the ElectricDrive GT. These tires are expected to meet the demand requirements for load, torque, range, noise reduction, and overall performance.

For the recently ended quarter, estimates have the company earning $0.33 per share on revenue just north of $5 billion. For 2022, earnings are pegged at $2.61 per share on sales just under $20 billion.

Goodyear’s market capitalization is currently at $6.3 billion, with its 12-month trailing revenue for 2021 expected at $17.43 billion. These figures give the company a price-to-sales ratio of 0.36. Given the industry, it appears shares can still be considered a bargain.

Of course, there are other metrics to use in order to value a company, and just as important as any numbers is the technical set-up. The chart below shows Goodyear shares hitting a 52-week peak of $24.89 in early November, before testing the 200-day moving average near the $18.50 level a few weeks later. The recovery of the 50-day moving average has been a slightly bullish development with current resistance at $22.50-$23. Support is at $21.50-$21. 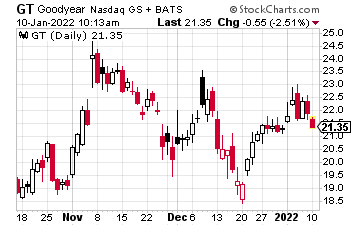 There are 11 analysts that cover the stock, with three strong buys, four buys, and four hold ratings. Given the string of earnings beats, these recommendations could improve on continued blowout numbers, with additional analyst coverage coming on board.

The all-time high for GT stock is at $75.75, which it hit 24 years ago. While shares aren’t likely to hit that milestone this year, it is reasonable to assume shares could trade towards $31-$33 at some point in 2022. This area represents multi-year resistance from mid-2017.

This would signal a return of nearly 50% if the aforementioned price levels are achieved. Acceleration towards the $30 area could come quickly if shares clear $25.

As for a bullish option trade, the GT February 23 calls are currently trading at $1.30 and would double if shares are above $25.60, technically, by February 18th as they would be $2.60 in-the-money. The company is scheduled to report Q4 earnings the second week of February, before these options expire.

Conservative traders could also buy the stock at current levels and sell covered calls going forward to lower the cost basis. This might mean limiting your gains if shares are called away, but this strategy also offers some protection if shares fade from current levels.