Coca-Cola (KO) is an iconic brand that has been in business since the late 1880s, when it began to manufacture its eponymous drink. Now a Fortune 500 company, Coca-Cola also produces a number of carbonated beverages that include not just Coke, but also Fanta, Sprite, and Schweppes, as well as the tea brands Gold Peak and Honest Tea and “hydration” beverages such as Dasani water and Powerade.

These are just a few of the well-known names that make up a portfolio of over 200 master brands. Additionally, the traditionally non-alcoholic beverage maker has started selling hard seltzer.

The company has re-entered the alcoholic beverage market for the first time in more than 40 years, through an exclusive production contract with the Molson Coors Beverage Company (TAP). This relationship will see an alcoholic version of Coca-Cola’s Topo Chico brand seltzer. (Coca-Cola was in the wine business in the late 1970’s after purchasing several wine businesses. The plan was to capitalize on what was then a trend. The company discontinued the products by 1982.)

The beverage-maker recently announced impressive third-quarter earnings of $0.65 per share on revenue of $10 billion. Expectations were for a profit of $0.58 on sales of $9.75 billion.

The chart shows shares are back in an uptrend following the earnings update. They’re making a run towards the company’s previous all-time high of $57.56 back in July. Continued closes above the $56 level would likely confirm ongoing momentum. Fresh support is at $55.50–$55.25 if shares retreat from current levels. 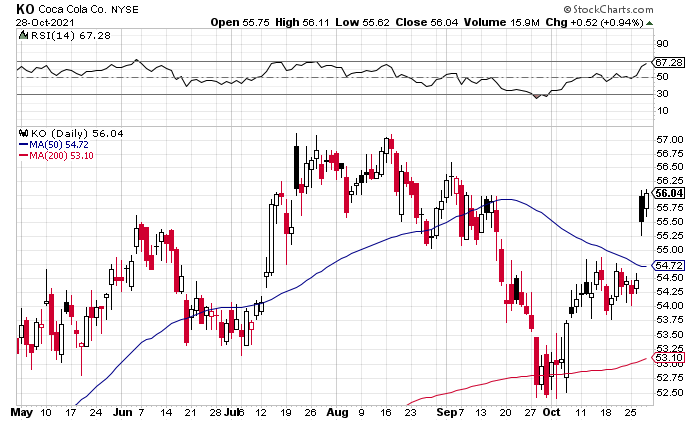 The company’s CEO stated Coca-Cola is emerging stronger from the pandemic, although the COVID-19 delta variant impacted several markets, resulting in a softer August. To make up for this, Coca-Cola said it will be increasing its consumer marketing spend during the fourth quarter.

For long-term investors looking for a well-oiled cash flow machine with a solid dividend, Coca-Cola shares should be added at current levels. The current dividend is at $1.68, or $0.42 cents quarterly, with the current yield just above 3%.

Shares typically don’t make massive daily moves so trading Coca-Cola options can be tricky. However, monthly call options can be sold against a long position to produce more income and to lower the cost basis.

Long-term equity anticipation securities, or LEAPs, are also available to trade with the January 2023 57.50 calls currently at $3.20. These call options don’t expire until January 20, 2023 and would double if shares are above $63.90 by expiration.