The commodity fell 16% from its July peak through August 20. Prices declined for seven straight days.

But then, the fall stopped. Prices turned around… And oil began to soar.

Yes – oil went from a near-bear market to seven-year highs in just a couple of months. And according to history, these new highs could lead to even more gains in oil over the next year.

Nobody wants to buy at the peak of a rally. That’s why buying an asset after it has gone up seems counterintuitive…

The gains have already been made, right? Haven’t you already missed it?

Actually, history shows that fear of buying at the top can do you more harm than good. The truth is that buying into a strong uptrend works.

Oil hitting multiyear highs is a great example of this principle in action. If you’re scared to buy because the commodity has already gone up, you’ll likely miss out on double-digit gains.

For three decades, we’ve seen this play out… buying when oil hits new highs has led to even higher highs a year later 71% of the time. And we’re coming off a multiyear high right now. Check it out… 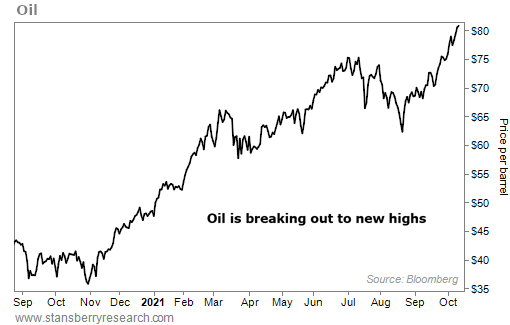 You can see the quick snap back from August’s bottom. It has essentially been a one-way ride higher. And oil broke out to a seven-year high along the way.

This breakout will likely lead to more gains in the commodity over the next 12 months. And double-digit returns are possible. Take a look…

Since 1990, oil has risen 3.3% per year. But buying after new highs is much more lucrative for investors…

Similar cases have led to 8% gains in six months and a 10% return over the next year. That’s much better than a typical buy-and-hold strategy. And it’s not what most investors would expect after the recent rally.

In short, if you see today’s breakout as a sign you’ve missed out, history shows that you should reconsider. There’s still time to make money in this commodity… A double-digit gain in oil is likely from here.