Yes, this really is me, Dan Ferris… the bearish guy. And no, I’m not writing under duress.

Yesterday, I showed you one crucial dynamic that every investor should pay close attention to. It’s the dance between value and growth.

Today – instead of my usual bearish fare – I’ll recommend a trade that I’ve liked off and on for the past couple of years. This trade has already performed well since last fall… And right now, it’s more attractive than it has been at any time in history – going back to at least 1928.

We have this opportunity for a simple reason: It looks like the latest transition from growth to value is already well underway…

As the COVID-induced bear market of March 2020 passed and the rebound began, investors stayed in love with growth stocks. 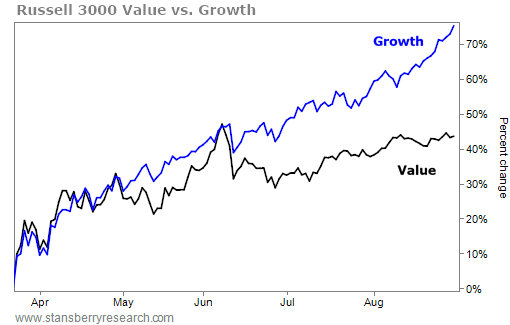 But by September, the “stay at home” trade in fast-growing technology companies had largely played out. Talk of inflation picked up around this time… That’s generally thought to be bullish for some of the more traditional value-stock industries – like oil companies (which might benefit from higher oil prices) and banks (which might benefit from larger interest-rate spreads).

While growth stocks had outperformed their value counterparts most of the time since 2009, a potentially big change started happening at that point… Value took charge again.

Take a look at the following chart… 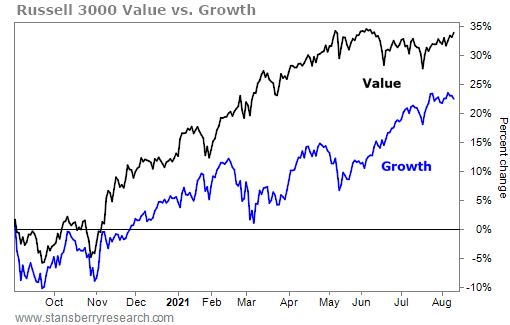 Now, I must note that the latest trend favoring value recently reversed… Since June 4, the Russell 3000 Growth Index is up 9%. Meanwhile, the Value Index has fallen 0.1%.

So with that said, you might be wondering if this is really the start of the latest shift from growth to value. My call might seem premature, given the reversal over the past couple of months.

But I believe this is merely a dip in the “go long value stocks” trade. Here’s why…

So, right around the time that value is taking a breather and letting growth stocks catch up a little bit… value has never been more attractive compared with growth – going back nearly 100 years.

That’s why after more than a decade of you being told to buy every dip in growth stocks, I’d like to be the first person to tell you this…

Now, you might be wondering exactly how to execute this trade…

It’s easy… A bunch of publicly traded exchange-traded funds (“ETFs”) exist for this purpose. The Vanguard Value Index Fund (VTV) is the biggest value-focused ETF that I know…

It tracks the CRSP U.S. Large Cap Value Index, which as its name implies, measures the return of hundreds of U.S. large-cap value stocks. VTV’s roughly 335 holdings include Berkshire Hathaway (BRK-B), the ETF’s largest position, and ExxonMobil (XOM), which is a top 10 position. As of the end of May, financial stocks made up roughly 22% of the ETF’s total holdings. And it’s a Vanguard fund, so the expense ratio is microscopic (0.04%).

It’s large and liquid. And even better, it has performed similarly to the Russell 3000 Value Index… so it should work well for investors seeking to buy the recent dip in value stocks.

(Full disclosure: I currently own a value-focused ETF in my 401(k) account. It’s not the one that I’ve mentioned today… But I don’t want to get in trouble with any lawyers.)

How much will you make if you make this trade today?

I can’t know that… But it’s a good bet that you’ll make more than you would by holding all the stocks that have been “no brainers” for more than a decade.

Nothing outperforms forever. And the sun appears to be setting on the growth-stock hyperbull market.

I hope that I’ve emboldened you a little bit…

Remember, even during my most bearish phases, I’ve always advocated against selling stocks in an attempt to avoid a bear market. That sort of timing is a fool’s errand.

When you find a good business trading at a reasonable enough price, you should buy it… It doesn’t matter if you think the overall market is expensive or not.

Relative to the growth stocks everyone has been in love with for more than a decade, value is more attractive than it has been in nearly 100 years.

With interest rates making most bonds unattractive and the equity bubble making many stocks unattractive these days, this is one of the best long opportunities you’ll find.