If you’re an optimist at heart, you’ll love what I’m about to say next…

Unlike my usual fare, this essay will not be filled with reasons to be bearish… examples of speculative excess… or yet another recommendation to hold a “truly diversified portfolio” (stocks and bonds, cash, gold and silver, and a little bit of bitcoin)…

Instead, today and tomorrow, I’m channeling my inner market bull to bring you something fresh…

I’ll show you a whole group of stocks that even a market bear can own today. I’ll even tell you it’s time to “buy the dip” in these stocks. How much more bullish could anyone be?

But before I give away all the specifics, we must learn about an important, fundamental “pendulum” that’s swinging from one group of stocks to another right now… and giving us this opportunity.

As you likely know, the stock market can be split many different ways…

But as a dyed-in-the-wool value investor, one particular split always catches my attention – two broad groups of value stocks and growth stocks.

What do I mean by differently?

Well, over the past few decades, when growth stocks have performed well, value stocks have tended to perform less well… and vice versa.

If you’re wondering why this happens, it’s just a function of human nature… People tend to get excited about one group of stocks, then they get bored (or frustrated) and switch to another group.

Generally speaking, value stocks are seen as stodgy and conservative. So when investors are super optimistic and excited about speculating on new technologies and other growth stocks, they tend to leave the stodgier, more conservative stuff behind. (Oil and financial stocks are two good examples of the stodgier, value-type stocks today.)

Then, when investors feel like they’ve gotten burned by believing too deeply that a “new era” was dawning due to new technologies, they turn back to the stodgy, conservative, old value stocks.

Now, let’s look at how value and growth stocks have exchanged market roles over the past 20 years…

We’ll use the Russell 3000 Value and Growth Indexes to track the two groups of stocks. And we’ll start with the most recent period, then go backward in time.

Since the bottom of the financial crisis in March 2009, growth stocks have outperformed value stocks. From March 1, 2009 through today, the Russell 3000 Growth Index is up roughly 640%, while the Russell 3000 Value Index has risen only about 265%… 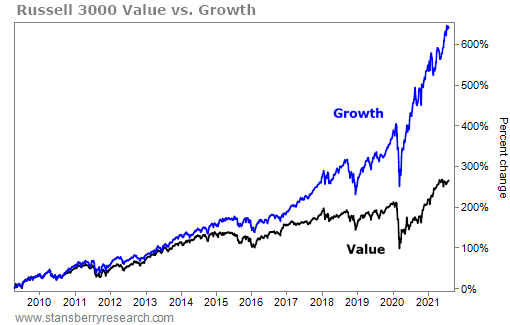 To understand why investors turned to growth stocks when they did, try to remember what was happening back in 2009…

All stocks were down. Fear and uncertainty reigned. But the worst performers were the banks, homebuilders, subprime mortgage lenders (all stodgier, value-type businesses)… and any other business tied directly to the housing bubble. That’s because when the housing bubble burst, investors lost huge amounts of money and soured on those sectors.

More than 100 banks failed in the bust – including large ones like Wall Street stalwart Lehman Brothers and savings and loan Washington Mutual. Home prices kept falling and didn’t bottom until 2012, scaring investors away from any businesses connected to housing.

When investors turned away from banks, homebuilders, and other value stocks, they sought opportunities elsewhere… They turned back to technology and other growth-related stocks.

Of course, right now, you might be wondering why investors abandoned growth stocks to begin with. To see why value dominated in the run-up to the housing bubble peak, we must go back to late 2002 – the bottom of the dot-com bust.

And as you can see in the following chart, value stocks trumped growth stocks in the aftermath of that bust. From the bottom of the dot-com crash in October 2002 until the peak of the housing bubble in October 2007, the Russell 3000 Value Index rose 112%, compared with a 90% gain in the Russell 3000 Growth Index over the same period… 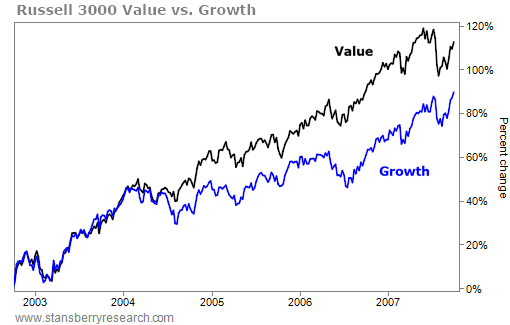 After technology, telecommunications, Internet, and other growth stocks crashed at the end of the dot-com bust, the Federal Reserve lowered interest rates. Lower interest rates meant lower mortgage payments… That made buying houses more feasible for many Americans.

Investors felt burned when the Internet bubble popped. Even a cash-gushing, stalwart like router- and switch-maker Cisco Systems (CSCO) fell nearly 90% from peak to trough.

Folks were fed up with losing money… so they switched to stodgier fare – like the then-cheaper homebuilders, banks, mining companies, and other similar stocks that had been neglected during the dot-com bubble. They also started to invest directly in houses… and TV shows about house flipping began to appear.

That’s really all the history we need…

When the dot-com bubble blew up, investors switched from growth to value. Then, they switched back to growth after the housing bubble popped and triggered the Great Financial Crisis. And for the past decade-plus since then, growth stocks have been in charge.

Growth… value… growth. You can guess what comes next.

Tomorrow, I’ll share how we know the pendulum is swinging today, and why it has made me – yes, even me – incredibly bullish on one group of stocks.