The COVID-19 pandemic caused supply issues everywhere… And it has led to some crazy price increases.

We’ve seen used car prices surge 45% over the past year, as an example. But as I explained last week, these are mostly temporary problems.

This wild situation will end… supply will open back up… and today’s seemingly crazy inflation won’t last.

Still, if you don’t believe me, there’s another way to prove it right now. As I’ll share today, it’s not just me suggesting this… It’s the market as a whole.

People see this price inflation, and they immediately worry that interest rates will rise. I am less worried…

Interest rates crashed in 2020 as the coronavirus pandemic hit, and as it became clear that the economy was going to slow down. The benchmark interest rate (the 10-year government bond rate) fell off a cliff back then – from 1.85% at the start of 2020 to nearly 0.5% by the summer of 2020, as you can see in this chart… 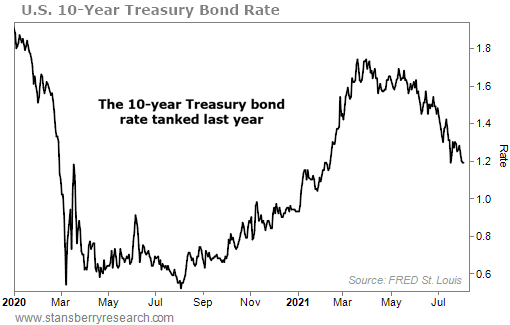 Many folks feared that interest rates would continue soaring. But they have actually started to move lower…

The rate on the benchmark 10-year government bond has fallen to 1.2%. And even more impressive, U.S. 30-year mortgage rates actually hit all-time lows early this year – below 3%. And they’re still below that level today.

How can interest rates be falling if inflation is really here to stay?

That’s an important question. And the answer is simple… It isn’t.

Interest rates are surprisingly “smart.” In a way, they represent the collective beliefs of trillions of dollars invested. So interest rates do a decent job of “forecasting” inflation and the economy much better than any one person can.

The downward move in interest rates tells me that most of the inflation we are seeing today is temporary. Heck, the spike in used car prices last month was responsible for more than one-third of the rise in inflation. So what happens when used car prices eventually come back down to Earth? Inflation dies.

The recent fall in interest rates also “forecasts” slower economic growth down the road. That tells me that the Fed might not even consider raising short-term interest rates at all in 2022.

So while the idea of continued higher – or even runaway – inflation is on people’s minds, it’s not likely to happen. Instead, the craziness will sort itself out. Car prices, materials prices, and labor prices will sort themselves out.

What does this mean for us as investors? It means that the “boogeyman” of today’s market isn’t a real concern. (Again, with the U.S. economy nearly $30 trillion in debt, there is still a long-term inflation problem looming… But that’s not what everyone’s worried about today.)

Today, people are thrilled to be out and spending money. That exuberance is carrying through to investing. We’re seeing excessive speculation in stocks, cryptos, and real estate (well, it’s excessive in Florida real estate, at least).

So while everything is Melting Up, we simply have too much wild speculation… and a Melt Down will likely follow, at some point. But today’s inflation won’t cause it.