Charlie Munger, billionaire investor and Warren Buffett’s right-hand man, has said that achieving your first $100,000 is the most difficult part of building wealth.

Of course, Munger isn’t alone. A lot of people have shared this insight over the years. And I concur 100%.

I started investing in early 2010 after moving from Michigan to Florida for better job prospects, easier car-free living, and the absence of a state income tax.

I mean, we’re talking eating ramen noodles every day, waiting for the bus in the rain, and getting five hours sleep per night because I was up all night researching investments.

But my portfolio is now worth hundreds of thousands of dollars. And it gets easier and easier as time goes on. In fact, my portfolio has increased by a six-figure amount since just December.

But getting to this point required me to hit that first $100k. Today, I want to give you three big reasons why hitting the first $100k is the hardest, and how you can overcome these challenges. Ready? Let’s dig in.

The first reason why hitting the first $100k is the hardest is because it requires you to actually start investing.

The hardest step is always the first step. It doesn’t matter what you’re doing in life. Starting is the most difficult but also most important thing to do.

After all, you can’t finish anything without starting it. I don’t care what we’re talking about. Could be learning a new skill. Maybe it’s exercising. Whatever you could think of, in order to accomplish any goal at all, you have to start. And the same goes for investing.

$100k might look like a mountain from the ground. But you really do have to take that first step.

No mountain gets climbed without taking that first, then second, then third step. So on and so forth. This requires belief. If you believe that you can accomplish something, that’s when it suddenly becomes possible. As Henry Ford said: “Whether you think you can, or you think you can’t – you’re right”.

Once you actually start building and rolling a snowball, things move along.

The key here is to start. Believe it’s possible. Put together your business plan, which will include how much you need to save and invest. Then get busy with it. As Maya Angelou said: “Nothing works unless you do”. So get busy working.

The second reason why the first $100k is the hardest is because it requires a massive amount of change.

People don’t like change. But if you don’t embrace change, you’ll be stuck with what you’ve always had.

If you keep doing what you’ve always done, you’ll have what you’ve always had. I grew up on welfare in Detroit. My dad split when I was eight. My mom gave me up for adoption when I was 11. I don’t have a college degree. Never had a high-paying job. Didn’t have a spouse to help me. I was broke for the majority of my life. $100k wasn’t going to fall as manna from the sky. I knew that if I didn’t change my ways, I’d stay broke forever.

So the question is: What do you want more? The comfort of the familiar or that first $100k?

You have to want that $100k. I mean, really want it. You have to want it so bad, that you’re willing to totally upend your life and change everything you’ve been used to. The familiar is comfortable. But this comfort is likely what’s holding you back.

Besides, change is the only constant in life. Don’t fight it. Embrace it.

This will require you to make massive changes in your life. Instead of spending 100% or more of your income, you’ll have to start saving and investing 50% – or more – of it. You’ll have to start fawning over stocks in the same way a lot of people fawn over material possessions. This means viewing the stock market as the best store in the world and stocks as the best merchandise in the world. Researching stocks will replace researching consumer goods, and spending money on investing will replace spending money on consumer goods.

The third reason? Compounding doesn’t start to really kick in until that first $100k is reached.

It’s the same as anything in life. The first few steps are the hardest. Investing is no different.

Albert Einstein has called compound interest the eighth wonder of the world. As powerful as compounding is, though, it takes a nice chunk of capital in order for compounding to make a material difference. I mean, compounding $5,000 at a market average annual rate won’t turn into $100k until more than 30 years have gone by! 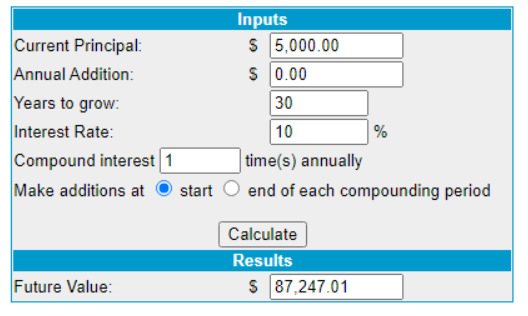 The first $100k requires you to do the heavy lifting.

Before the compounding can start to work its magic, you have to mostly save that first $100k. The need to save is going to result in some uncomfortable questions about your lifestyle, what you’re buying, and how you’re prioritizing things. Compounding just can’t help you very much when you’re working with a small sum of capital. So it’s going to be on you to achieve a high savings rate and invest the savings as intelligently and often as possible.

After the first $100k is reached, you can start to take it easy.

Charlie Munger noted that once you hit the first $100k, you can ease off the accelerator. That’s because compounding can start to kick in and do its magic. Speaking of magic, compounding $100k at a market average 10%/year for 20 years turns into almost $675,000. 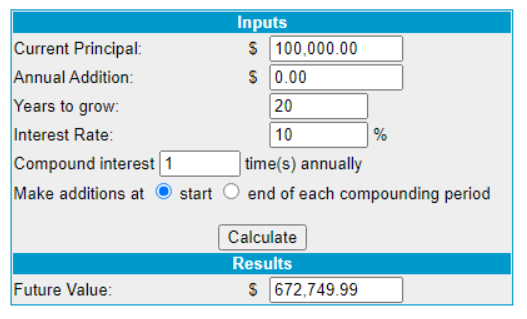 I mean, you could start young, just get to $100k, then live life on cruise control thereafter. That’s how important that first $100k really is. In order to build your compounding snowball, you first have to accumulate the snow – or capital – and put in that effort to pile it all up, form it into something, and then start to roll it down a hill. But the bigger this snowball gets and the faster it starts to roll, the less effort you have to put into it. At a certain point, you don’t even have to push at all – it’ll become this monstrosity that grows bigger and rolls faster, all by itself, at a rate you could never accomplish by yourself.