One sector in particular absolutely soared out of the gate. It’s normally a boring spot in the markets. But it jumped more than 25% in the first five months of 2021, roughly doubling the return of the S&P 500.

June took this sector in a different direction, though. It was its first real pullback in more than six months.

After peaking on June 1, this corner of the market has fallen hard. It dropped roughly 10% in just 13 trading days. And it remains near those lows today.

Still, if you’re wondering if that fall will continue, history tells us it’s not likely. The recent drop has gone too far, too fast. And we could see a quick bounce back as a result.

Specifically, a 16% rally is likely over the next year, based on history. And that makes this boring sector one to pay attention to today.

The basic materials sector isn’t as exciting as tech stocks. The sector holds mining companies and chemical stocks, just to name a few. But it’s been a hot area so far this year.

Again, the sector dramatically outperformed the S&P 500 in the early months of 2021. And even though it has fallen recently, history says another rally is about to begin.

That’s because the sector recently hit hugely oversold levels based on the relative strength index (“RSI”).

The RSI measures when an asset has gotten ahead of itself in either direction. And it often signals that a reversal is likely.

For example, if a stock falls below and rises back above an RSI of 30 – hitting oversold territory – a rally is likely to follow.

The iShares U.S. Basic Materials Fund (IYM) tracks the sector. It dropped below an RSI of 30 last month. And it’s still at a low level today. Take a look… 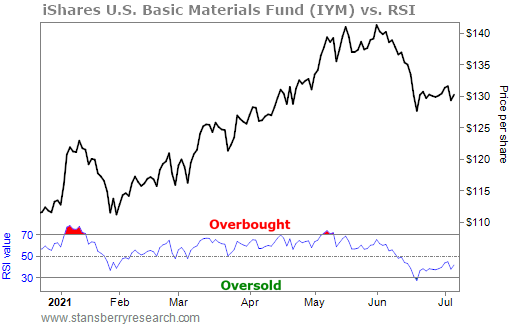 You can see IYM hit oversold territory after the recent fall in price. Importantly, as I said, this kind of setup often leads to a reversal.

Since 2000, similar setups have led to gains 71% of the time. And solid outperformance is likely. Take a look…

Basic materials have done pretty darn well since 2000… returning almost 7% a year. But that return looks small compared with buying after an instance like we’re seeing today.

Similar setups have led to gains of 5% in six months… and 16% gains over the next year. That’s way better than a simple buy-and-hold strategy.

I understand if the basic materials sector seems a bit boring. But boring often works, just like we saw in the first five months of the year.

Now, this recently hot sector is due for another big move higher. Shares of IYM offer a simple way to take advantage of it… And with double-digit upside potential, it’s a bet you should consider making today.