A “boring” U.S. sector has been dominating high-flying tech stocks.

Heck, it has dramatically outperformed the Nasdaq, semiconductors, and the S&P 500 over the last nine months.

Still, despite its incredible performance, it’s grossly undervalued compared with the broader market. It trades for a 53% discount to the S&P 500 right now.

That’s setting up an incredible opportunity. It means that this boring sector – which is already outperforming – can keep moving higher from here. And there’s an easy way for you to take advantage of it.

There are certain corners of the market that few investors ever think about. They aren’t sexy, even when they’re booming.

Today’s opportunity is just that… boring, despite a major move in recent months. I’m talking about U.S. regional banking stocks.

After such a rally, you might expect this sector to be darn expensive. But that’s not the case today. Instead, these stocks are cheap.

We can see this by looking at the price-to-earnings (P/E) ratio for both regional banking stocks and the S&P 500. A relatively high P/E ratio means a market is expensive. And a low P/E ratio can signal an undervalued opportunity.

Today, the regional banking sector trades at a 53% discount to the broader market based on this measure. Take a look… 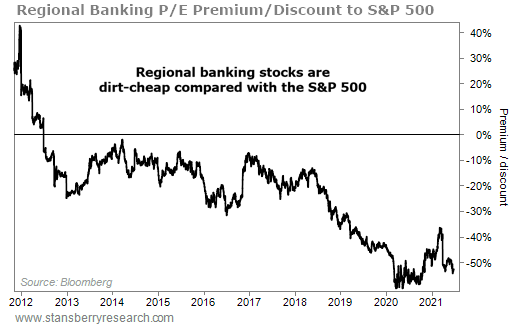 This kind of deep value isn’t always available. Historically, the discount has been around 20%, with some minor fluctuation. That’s what we saw from the end of 2011 into 2018.

This ratio still shows how dirt-cheap regional banking is right now. This sector would have to double in price once again to be as expensive as the S&P 500.

That’s entirely possible based on what we’ve seen over the past decade. And it means that the major rally we’ve seen so far could only be getting started.

The simplest way to take advantage of it is the SPDR S&P Regional Banking Fund (KRE). It holds a basket of these smaller banks. And that means it offers a simple and diversified way to make this bet.

I realize that this isn’t a sexy idea. But the best opportunities are often boring.

U.S. regional banking stocks have been on an absolute tear. And based on today’s value, they still have plenty of upside potential. Shares of KRE offer a simple way to profit from it.