Air travel is an old, boring business in the U.S.

The industry has gone through decades of ups and downs, eventually consolidating into the mature industry it is today.

It’s so mature – and fraught with difficulties – that even Warren Buffett, the most famous long-term investor alive today, sold all of his airline stocks in the first quarter of 2020.

China’s air-travel industry is in a totally different place right now. It’s not a boring industry… It’s one primed for fantastic growth. And it isn’t just a rebound play from the coronavirus pandemic.

As I mentioned yesterday, China has been adding new cities at a rate double that of airports. And that makes sense.

You don’t build a new airport before a city is big enough to support it. Building an airport takes an enormous amount of resources, and supporting one requires huge running costs… which can only be justified with a big enough population.

But over time, this trend has created an unusual gap…

Of China’s 687 cities, 113 have populations over 1 million… compared with just 10 in the U.S. Yet, the U.S. has 604 airports with scheduled commercial flights. That’s 2.5 times more than the number of airports in China.

This difference would have made sense when China was still an emerging economy. It makes no sense today, though… especially considering the way China’s demand for air travel was growing before the pandemic. Take a look… 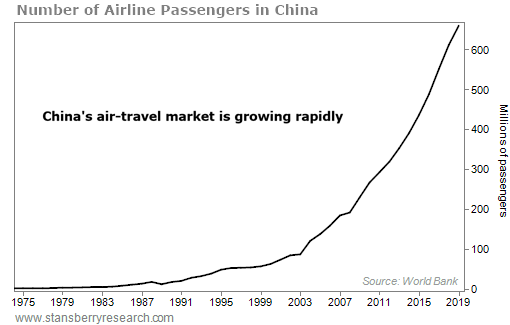 With hundreds of huge cities still without airports, China is about to catch up – in a big way. It’s all about the numbers…

We’re talking about a country with 1.4 billion people. And each year, 10 million of them move into cities from the countryside. China is seeing rates of urbanization that America hasn’t seen since the 1950s… and with urbanization comes travel.

But without enough airports, China’s air-travel market has a long way to go before it can reach even half the level of penetration now enjoyed by Americans. Take a look at the chart below… 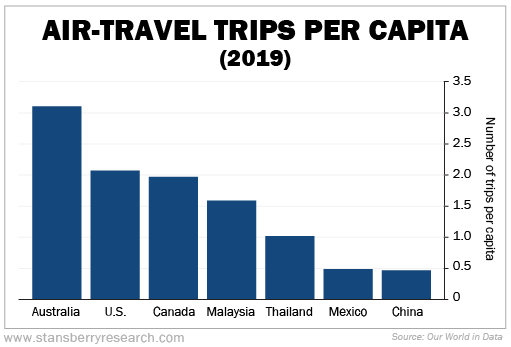 As you can see, China’s air-travel penetration isn’t even one-fourth that of the U.S. market. It’s not even half that of its two Asian neighbors, Thailand and Malaysia.

Yet China is the world’s second-largest market in terms of total passengers flown in 2019.

Now, Beijing has made it a national priority to boost the country’s air-travel capacity. It’s part of the country’s long-term economic goals, which it sets every five years.

Beijing wants to add at least 30 new civil airports and expand existing ones. The goal is to reach an annual capacity of 2 billion passenger trips by 2025, up from the current 1.4 billion.

The Civil Aviation Administration of China – the country’s equivalent of the U.S. Federal Avian Administration – forecasts that China will have 450 civilian airports in operation by 2035. This means China is expected to build around 14 new airports every year, on average, for the next 15 years.

Of course, this is only a general picture. But the growth story is clear. You’re not going to find this kind of development in the air-travel industry anywhere else on the planet, especially not on this scale.

It’s an incredible setup for long-term growth… possibly better than any major industry in China today.

This is a story most folks wouldn’t expect. Investors in the U.S. certainly don’t think of air travel as a growth industry. And it isn’t a sector that they’d usually consider to be a standout performer.

But in China, given the massive shifts taking place, the air-travel industry is just that. And it’s a sector that’s poised for incredible growth in the years to come.